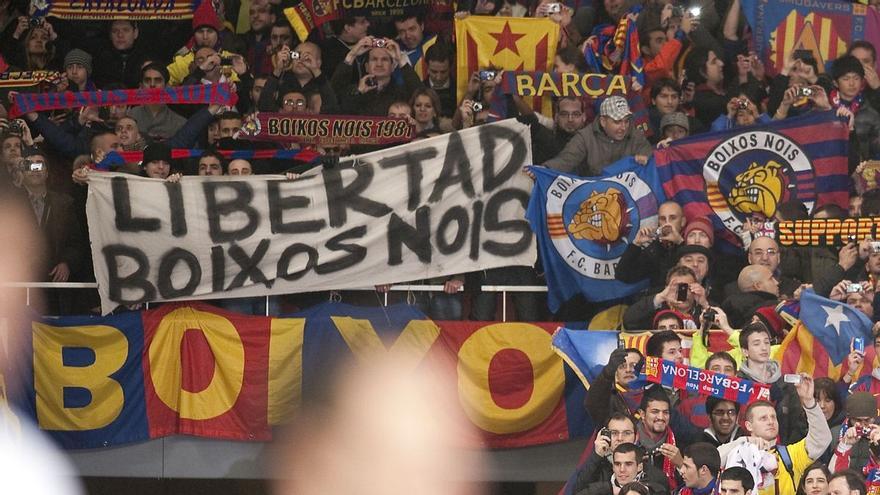 The National Police has arrested in Barcelona the 14 “most violent” members of the Boixos Nois and its closest environment, as reported by the state body through a statement. The operation, carried out on November 2, was led by Court number 1 of Sabadell (Barcelona), which decreed the secrecy of the proceedings until Wednesday, November 24. Those arrested are charged with serious crimes for drug traffic, sexual exploitation of women, illegal possession of weapons or money laundering, among others. Seven of them have entered prison.

The agents entered and searched 18 homes and premises, resulting in the seizure of ten firearms, numerous knives, a kilo of cocaine, more than 5,000 plants of marijuana and 42 kilos of buds, as well as different narcotic substances such as pink cocaine and hashish. It has also been intervened numerous material of a supremacist nature, related to this ultra radical group ‘Boixos Nois’ and to the biker band ‘Hells Angels’ –angel of hell– to which one of its leaders belonged.

On the other hand, they have blocked more than 20 bank accounts, seized three homes and 27 vehicles, and seized more than 300,000 euros in cash, allegedly from the illicit activities carried out by the organization.

Nexus of a criminal network

The investigation began in the first quarter of 2020, when the investigators detected how this criminal network, whose link would be the ultra Boixos Nois group, the most radical faction of followers of FC Barcelona, ​​acted as a true hierarchical and disciplined criminal organization, and with an “excessive violent character” that they manifested in front of other organizations and clans that tried to dispute their areas of action.

During the development of the investigation, supervised by the judicial body, it was determined that presumably for its financing they would be committing a wide range of serious crimes. Regarding the drug trafficThey did not discriminate with respect to the type of drug distributed, relying on a complex network of producers and redistributors of the substances, with whom they avoided having any contact.

Another illegal act has been the importation of illegal drugs, mainly anabolic drugs, some of which the origin is unknown, lacking authorization by the Spanish Agency for Medicines and Health Products, and whose consumption can even cause death.

A significant event in this operation, the statement remarks, has been the neutralization of a floor for the coercive prostitution of women, an important area of ​​struggle for the National Police, which uses as one of its main references the “National Police Plan Against Trafficking in Human Beings for the purpose of sexual exploitation ”. The economic returns resulting from this illicit activity became the basis for financing their activities, mainly related to the attendance at musical and sporting events for the dissemination of hatred, hostility and violence towards other groups vulnerable or antagonistic.

This radical faction would be the heir to the one known as ‘Casuals’, dismantled a few years ago with the arrest and imprisonment of some of its members accused of extortion and kidnapping.

The ultra group Boixos Nois was founded in 1981, recalls the note from the state police. Since then, some of its members have participated in numerous attacks on ideologically antagonistic ultra groups and have been the target of different police operations mainly linked to the drug trafficking, money laundering, extortion, threats, illegal arrests, violent attacks.

One of the darkest moments in the history of this radical group was in 1991, when five of its members stabbed to death a 20-year-old RCC Espanyol de Barcelona follower in the surroundings of the old Sarrià stadium, the first ultra death. in Spain.

Their last most well-known violent action took place on January 25, 2020 in Valencia, when they staged serious clashes against the ultra Yomus group, in the vicinity of the Valencian Mestalla stadium. The main leaders who have now been arrested participated in this fight.

In 2003 they were denied entry to football stadiums alleging their violence and dangerousness. In addition, in 2019, the Permanent Commission of the State Commission against violence, racism, xenophobia and intolerance in Sport declared them a “dangerous group”.