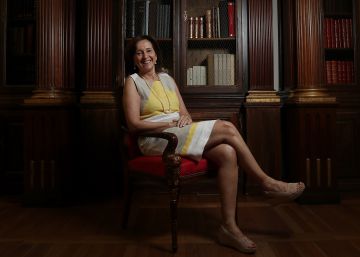 The institutions of yesterday struggle to give their space to today's culture. The National Library of Spain (BNE), created more than three centuries ago to house knowledge (printed), is adapting to forced marches to the current technological reality. The new step that aims to give aspires to incorporate into its legacy the conservation of video games or websites, as it appears in the proposal that the director of the institution, Ana Santos, has sent to Javier García Fernández, acting undersecretary of the Ministry of Culture and Sport. It proposes to include the regulation of the conservation of video games, web sites, electoral propaganda posters and bookmarks, among other formats, based on the reform of the Law on Legal Deposit of 2011.

In addition, the new law will relinquish the storage of old microforms (also hobbies, crossword puzzles, sudoku and soups of letters). "Videogames will be of Cultural Interest (BIC) in the future, because they have a very important cultural value as an artistic creation", affirms Ana Santos, director of the BNE.

For the moment, the institution can not keep them because the Law of Legal Deposit obliges to deliver copies to the BNE only to Spanish publishers and in Spain few are edited, even if the workforce is Spanish. But he points out that they are in talks with the Spanish Video Game Association to find a way to not lose that heritage. "Although maybe we do not give them much value now, they are new materials that we must keep," says the director. When Santos heard about the Ministry of Culture's intention to reform the Historical Heritage Act of 1985, He mobilized his people to develop a draft that included chapters dedicated to the most specific and comprehensive bibliographic heritage. They will consolidate the laws that in these three decades have emerged to meet the new needs. Fundamentally the Electronic Legal Deposit, 2015. "We must adapt the law of 85 to the current reality, that is, to the different types of heritage collections that the BNE receives, including digital heritage", says the director, who points out the interest in adapting the laws and continue working for the future, keeping the present.

Santos regrets the limited means that the institution has to conserve digital knowledge, but congratulates for the performance that has been given by the creation of specialists called "web curators", distributed throughout the Spanish geography. They are responsible for determining interest. They select and communicate to the BNE what they want to keep. "These teams help to give coherence to the collections, because they define what is interesting," says the director.

This is an essential part of the new drafting of the law for the conservation of this heritage: the Autonomous Communities will be the ones that decide which websites and resources will be captured and deposited to be conserved and disseminated. The BNE will no longer have exclusivity in the inspection and conservation of the legal deposit, which saves resources and gives scope for other centers. The criterion is "to achieve the best representation of the Internet world".

They also point to novelties in the conservation of books if changes in the law are accepted. In addition to two copies of the first editions of each title published in Spain, the editor would deposit the digital copy on the BNE server as well.

These digital titles will be available to the public. The National Library of Spain "may facilitate the consultation of publications in digital format through the regional libraries of the different autonomous communities using secure means of access," says the new text of Article 10.

In the proposal for the new drafting of the Law of Legal Deposit, it is proposed, for section 2 of article 9 related to cinema, that the Spanish Film Archive receive the originals of each production, "in the original version, of every cinematographic film, documentary or fiction ", made by a producer domiciled in Spain. It is a measure agreed with the director of the Institute of Cinematography and Audiovisual Arts (ICAA), Beatriz Navas. "They have to be in a public institution," says Ana Santos.

In fact, last December the United group Podemos registered a Proposition No of Law with measures to avoid the disappearance of the cinematographic patrimony. He proposed to the Government the creation of Well of Audiovisual Cultural Interest (BICA) and an expansion and development of the chapter dedicated to cinema in the Law of Historical Heritage, because "the law lacks a specific protection figure for the correct safeguarding of the cinema", they assured from the political group.

A law of 2011. The legal deposit is the obligation to deliver copies of publications of all kinds, reproduced in any medium, in the BNE (or in the network of libraries that collaborate with the institution). The current law has already incorporated a first approach to new forms of publishing due to the incorporation of technologies and the arrival of the Internet.

The websites, regulated in 2015. A new Royal Decree considered for the first time the object of legal deposit websites and online publications. The norm considered that all kinds of websites and the publications contained in them are subject to legal deposit, as long as they contain bibliographic, sound, visual, audiovisual or digital heritage of the cultures of Spain.

The precedent of legal deposit. Founded by Felipe V at the end of 1711, it did not open its doors until March 1712 as the Real Public Library. As explained on its website, for a real privilege, precedent of the current legal deposit, the printers had to deposit a copy of the printed books in Spain. In 1836, the institution ceased to be owned by the Crown and became dependent on the Ministry of the Interior. It was then when he received for the first time the name of National Library.

Three centuries of custody. The National Library holds more than 34 million materials produced in Spain since the beginning of the 18th century. The material is very diverse, although about half are books.

Almost half a million income. In 2018, 454,886 copies entered the institution, by legal deposit, a figure greater than that of the previous year, which hovered around 410,000.