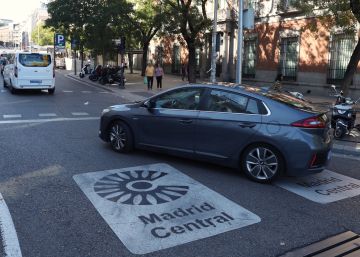 The president of the Community of Madrid, Isabel Díaz Ayuso, premiered the year with some controversial statements in the SER chain. “There has to be a balance, right? Between the one who wants to enter Madrid and the one who lives in Madrid in the center and does not want to die contaminated, ”asked journalist Javier Casal. “Sure, but that will obviously exist. No one has died of this either. That is, I do not want a public health alarm to be created because there is none, ”said Díaz Ayuso. A scientific study funded by the City Council of Madrid has just put a figure on the table: more than 500 deaths a year in the capital avoidable with political measures.

“The implementation of Plan A in the city of Madrid would cause a significant decrease in emissions of air-related pollutants and, in turn, would lead to better air quality and significant health benefits: more than 500 premature deaths every year ”, the research authors, recently published, calculate in the specialized magazine Environmental Research. The work is signed, among others, by Elena Boldo and Rebeca Izquierdo, from the National Epidemiology Center, and by the environmental engineer Rafael Borge, from the Polytechnic University of Madrid.

“At this point, nobody can say that this does not exist,” says environmental engineer Rafael Borge

The Air Quality and Climate Change Plan, also called Plan A, It was approved in September 2017, with Manuela Carmena de mayoress. It includes 30 measures, among them the area restricted to traffic in Central Madrid, the renewal of the bus fleet and the expansion of the BiciMAD public bicycle system. Plan A is still in force, although the current mayor’s team, José Luis Martínez-Almeida, works on another strategy, baptized Madrid 360.

The new study estimates that Plan A would reduce the atmospheric concentration of nitrogen dioxide by 23%, a pollutant emitted primarily by diesel engines. The drop would reach 26% within the M-30 and 30% in the Madrid Central area, according to the engineer Rafael Borge. Nitrogen dioxide poses “serious health risks,” since asthma and respiratory failure worsens, according to the World Health Organization.

The research predicts in turn a 9% decrease in PM calls2.5, suspended particles – also emitted by diesel engines primarily – that are 100 times thinner than human hair and easily penetrate the lungs. PM reduction2.5 achieved by Plan A would reach 16% within the M-30 and 24% in Central Madrid.

“Plan A is completely aligned with the new urban paradigm, whose objective is to integrate sustainability criteria, contemporary lifestyles and economic progress,” the researchers applaud in the magazine Environmental Research. The main author of the new study, Elena Boldo, has just left the National Epidemiology Center to join, precisely, the Madrid City Council, according to sources from the scientific body.

Borge explains that Plan A would also have an unwanted, but expected effect. By decreasing the emissions of nitrogen oxides, a cascade of chemical reactions in the atmosphere would end up causing a slight rise in tropospheric ozone, a secondary pollutant that, in excess, also causes respiratory problems. “The benefits of reducing nitrogen dioxide compensate for the damage caused by the rise in ozone, which in any case would be less than 1% in all of Madrid,” said Borge, whose team in the Polytechnic usually makes inventories of polluting emissions for the City Council .

“Madrid Central has a microscopic size compared to the rest of the city. The grace is that it serves to catalyze technological change and, above all, the mentality: that citizens understand that you don’t have to drive everywhere, ”says Borge. Last year, a team of researchers from the National School of Health calculated that nitrogen dioxide is guilty of over 6,000 avoidable deaths every year in Spain; the suspended particles, of another 2,700 annual deaths; and tropospheric ozone, about 500. “At this point, nobody can say that this does not exist,” says Borge.

Julio Cortázar and the “eternal” youth of axolotl

UFOs are in your head, not out there