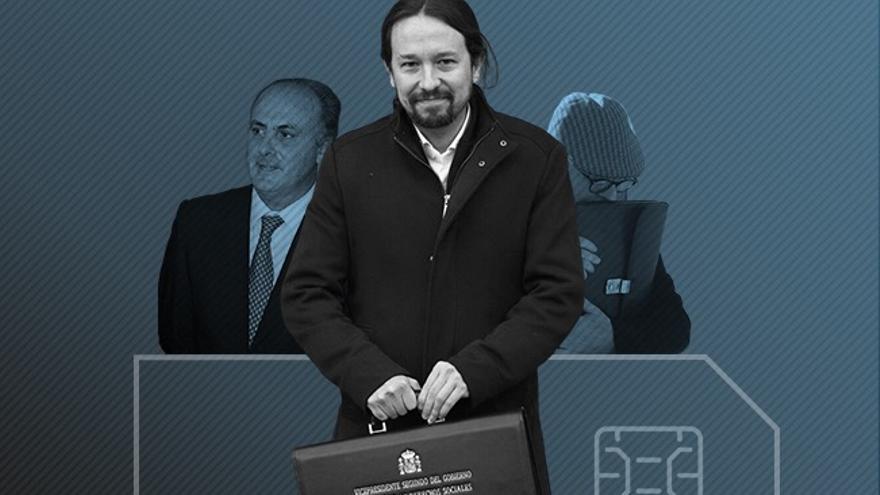 Piece number 10 of the Villarejo case, known as Dina, returns to focus on the commissioner accused of leading a criminal organization dedicated, among other activities, to staging and public smear campaigns. This is the main consequence of the decision adopted this Wednesday by the Criminal Chamber, a judicial instance of the National High Court that reviews the decisions of the investigating judges and that decided to correct the one adopted by Manuel García-Castellón last May, consisting of withdrawing Pablo Iglesias from the condition of injured party that the same magistrate had granted him in March of 2019.

The judge's decision to stop considering Iglesias a victim of the events, adopted in agreement with the Anticorruption Prosecutor's Office, involved a turn in the case and put the leader of Podemos at the target of an intense investigation by the judge. However, none of the proceedings ordered by the magistrate has yielded a conclusive result, which has prevented García-Castellón from taking the step of requesting the imputation of Iglesias to the Supreme Court, a court before which the second vice president of the Government is calibrated.

With the reorientation of the case towards Pablo Iglesias At the same time the line of investigation against Villarejo was parked, accused from the very opening of piece 10 for having allegedly disseminated private information about the mobile of Dina Bousselham, a former collaborator of Pablo Iglesias. Among the documentation seized from the police in November 2017, a copy of Bousselham's mobile card had appeared, with information that coincides with that published by three media at key moments for Podemos. The two journalists who acknowledged having previously handed over that card to the police officer, then active, continue to be charged.

Judge García-Castellón has sought evidence against Pablo Iglesias until practically the moment in which the Criminal Chamber has reminded him in a car that the investigated is the commissioner and that the rest are "mere hypotheses." Furthermore, they say, in the event that these deductions were accompanied by reasonable indications, they should be investigated by an ordinary court. The now ill-fated Pablo Iglesias case The activity of the Villarejo case has centered since the confinement ended, a macrocause with some thirty pieces that affect the second bank in the country, Ibex companies or the Ministry of the Interior during the Government of Mariano Rajoy.

The judges of the Criminal Chamber have also been obliged to remind García-Castellón that precisely the main investigated, José Manuel Villarejo, is for leading an organization that received orders to organize discrediting and intoxication campaigns against third parties with the use of media.

Villarejo declared at the beginning of piece 10 to the judge that gave a copy of the card to the commissioner Eugenio Pino, deputy director of operations at that time and architect of the political brigade that acted against the sovereign process, Podemos and in the espionage of Bárcenas to allegedly favor PP leaders. The representation of Iglesias gave the judge a letter with the chronology of publications from Bousselham's mobile phone that harmed Podemos and in which he showed the coincidences with, among other episodes, the negotiations with the PSOE in 2016 to form a progressive government.

To the request for expert reports to the Scientific Police, the rogatory commission to the United Kingdom for the attempt to repair the card in a local company or the order to the agents to investigate this piece in a "preferential" way, the last one must be added The judge's initiative, the statement last week by José Manuel Calvente, the lawyer fired by Podemos who had assured in the media that the Dina case was "a montage" orchestrated in person by Iglesias. During the statement, Calvente complained that he is being attacked on Twitter, where he is very active, and the judge offered to investigate him, as well as police protection.

The Dina case starts at the request of the Police

Dina Bousselham, at the time Pablo Iglesias's advisor in the European Parliament, denounced in November 2015 that several belongings had been stolen from her at the Ikea in Alcorcón and that, among them, was her mobile phone. As the two Interviú journalists declared before the judge, the original or a copy of that card reached the magazine anonymously in January 2016. They decided that the material was not publishable and the publishing company handed it over to Iglesias, who, despite acknowledging that it was Bousselham's cell phone, kept the card for at least six months.

The Podemos leader alleges that he did it to protect his collaborator, who was greatly affected by the information that romantically related her to him in a false way. According to Iglesias' account, when Okdiario begins to publish the content of the card, the secretary general of Podemos decides that this protection is already impossible and hands the card to Bousselham, who later declared to the judge that at that time he could no longer access its content.

That Iglesias retained the card for an indefinite period and that its owner received it in poor condition are data that the judge had known since March 2019, when he summoned both to testify, offered them to act as injured parties and warned Iglesias of the "very implications serious "of the Ministry of the Interior in the Villarejo case. Iglesias and Podemos started the campaign of the last generals pointing out a plot against the political organization that included the issue of Bousselham's card. Room 10 had been opened, like all the others in the Villarejo case, by a report from the Internal Affairs Unit of the Police about the discovery of Iglesias' card among the documentation seized from the commissioner.

Everything changes after confinement

Upon returning from confinement, during which the opposition pointed to Iglesias as one of the main responsible for the health crisis, the Prosecutor's Office and the judge agreed to call Bousselham to testify again. The reason for not having done it before, they argue, is that a report from the Scientific Police was pending that took almost a year, until January 2020. In her new statement before the judge, Bousselham acknowledged that she had made the screenshots of the card, later published by the media directed by Eduardo Inda, as well as by El Confidencial and El Mundo. Dina Bousselham also said that she could have sent those screenshots to third parties even though she did not remember.

With this new information, Anticorrupción sent the judge a letter in which it argued that if Villarejo was not the only possible person responsible for the dissemination and publication of those messages, there is no crime from which Pablo Iglesias could be harmed and that the injured condition. In the same letter, Anticorrupción - accused in some media and parties of helping Podemos - stated that Iglesias is presumably responsible for the crimes of disclosure of secrets (for keeping private documentation of another) and / or computer damage, but that it should be cited to Bousselham again because they are criminal typologies that require the victim to report in order to act.

Judge García-Castellón ignored this part of the prosecution's document, did not cite Bousselham and also did not value a later letter in which the woman changed her version, ensuring that she could access the content of the card and exonerating Iglesias. By contrast, the judge forced Bousselham to stop sharing a lawyer with the secretary general of Podemos.

No evidence against Iglesias

The launch of international legal cooperation by García-Castellón resulted in a rogatory commission satisfied by the United Kingdom. In it, the company to which Bousselham's husband had sent the card after receiving it from Pablo Iglesias replied that it could not be accessed, that they did not put in place the mechanism to do so because the client rejected the budget, while clarifying that this it did not arrive physically damaged, question on which the judge affected. Later, the Scientific Police certified that the damages that interested the judge were not made by Pablo Iglesias but by the company when making the first checks on the device.

Meanwhile, and as the possibility of attributing the aforementioned crimes to Iglesias was declining, some media published that the judge was considering attributing to Pablo Iglesias a presumed crime of obstruction of Justice for having appealed his loss of status as injured party knowing that he was not it was. Judge García-Castellón is pending to receive the report he ordered to Internal Affairs on the statement of Bousselham's ex-husband and to resolve the Anticorruption request that he and the former collaborator of Iglesias testify again.