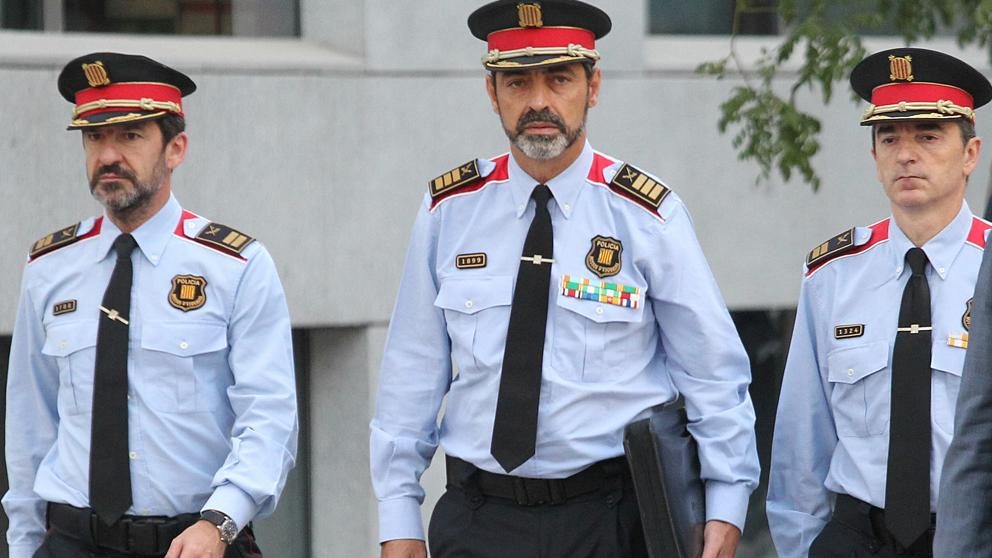 The weather forecast for today in San Fernando de Henares warns that the morning will be especially freezing. And, therefore, that it will be colder than is usual in the inhospitable dependencies that the National audience It is 25 kilometers from the center of Madrid and that from ten in the morning they will accept the trial against the greatest of Mossos d’Esquadra, Josep Lluís Trapero; the intendant Teresa Laplana, and those that were charges of the Ministry of Interior, Pere Soler Y César Puig. Trapero will enter sheltered and of civilian, surrounded by the two commissioners who have accompanied him to the door of that same court in two previous declarations: Ferran López Y Joan Carles Miller. The chief commissioner of the Catalan policeEduard Sallent, will also be by your side. The image will transfer the unanimous feeling of the police leadership that there are no fissures in the defense of Trapero and Laplana’s actions in the events that are judged: the facts before the Ministry of Economy and the illegal referendum of October 1st.

For several weeks, Commissioner Ferran López has been in charge of organizing the logistics of the trip to Madrid. Officially, that will be the entourage that traveled by train yesterday afternoon and that completes the police communication officer, Patricia Plaja, and the lawyers assigned by the Department of Interior of the Generalitat to the two policemen: Olga Tubau Y Mari Pau Martí. Some mossos, friends of Trapero since its inception 30 years ago in Girona, have traveled on their own and will remain the first days in Madrid to be by their side.

There are few police sources consulted that last night recognized that before the most important trial in the history of Mossos d’Esquadra, the organization had failed again due to excessive prudence. And they claimed a much more powerful image with the presence at the doors of the National Court of a greater number of commissioners. “It is not normal that more commissaries have traveled this week to visit a ship of the Ertzaintza Janl Basque Country that to wrap Trapero at the door of the court, ”reflected another source, also a police officer.

It is likely that many did not occur to them or that they thought that the presence of López, Molinero and Sallent was enough to represent them all. However, other sources warned that they had not wanted to show an intimidating image in court. In any case, today the general tonic will be the one that has always marked the DNA of the Mossos d’Esquadra: prudence and discretion. The same ones that will be exhibited by those responsible for Interior in the coming days

The Minister of Inside, Miquel BuchHe would have been in Madrid this morning if he had received only one sign that his presence would somehow benefit the defendants. Aware of the need not to interfere in the least with the trial against the major, Buch will not go to Madrid, for the moment, and will wait for the last sessions of the trial, when there are no longer witnesses of mossos, to attend a session. Nor will it be in the statements of César Puig and Pere Soler because they coincide with a full Parlament. If those days responsible for the charges that Puig and Soler held: Brauli duart Y Pere Ferrer.

Prudence will condition today the public statements of the members of the Governboth of Junts per Catalunya like ERC, to those who have been sent the request to try not to interfere with loud exclamations in the trial. And prudent or something else is the attitude of all mossos police unions, including those of commanders, who have kept a sepulchral silence during this last week. While it is true that some spokesmen, such as the majority union, have always defended the police actions of those days that are being tried, they have said nothing in relation to a trial in which they request eleven years for which he was the head of the body and Another four for an intendant.

Last night, a union official acknowledged that they had been discussing in their organization what they should do, whether or not to release a statement, because what they did not want was to harm the cause. They recognized themselves as “lost.”

In any case and beyond the supports and symbolic images, Trapero and Laplana will sit alone on the bench of the defendants of the National Court. They are asked for eleven and four years in jail respectively.

The day will start with the previous issues and we will have to see if the prosecution decides to change, already at the beginning, its accusation of rebellion after the Supreme Court he will not contemplate it in his sentence of you process.

Then, the interrogations will begin with Major Josep Lluís Trapero. And as it happened during his statement of more than four hours in the Supreme Court, many of the more than 17,000 men and women he once had under his command will be attentive to his words. That day, Trapero will not only defend himself, but will defend what the whole body did.