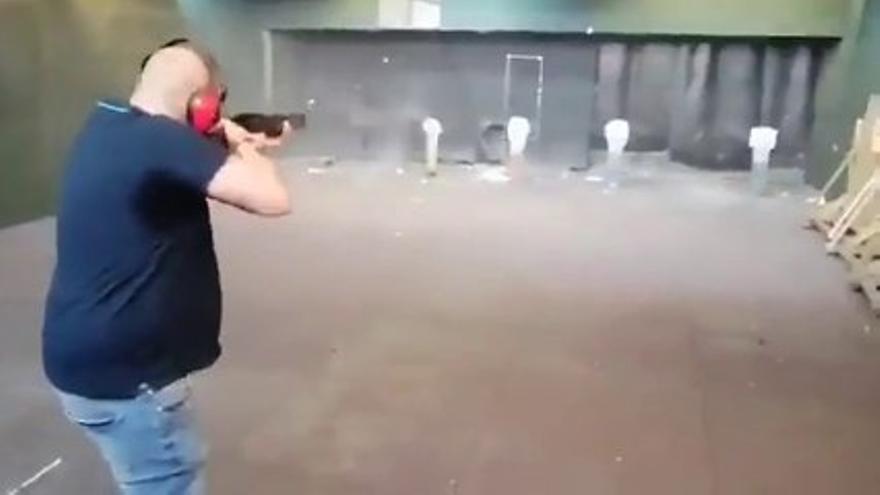 The magistrate of the National Court Santiago Pedraz has confirmed the file of the case in which an ex-military resident in Malaga was investigated for take shots at photographs of members of the Government, an action that was recorded and later disseminated by networks. The National Court, which was investigating whether there was a crime of threats to the Government, understands that it was not premeditated and that it was done “to kill time.”

The Central Investigating Court number 5 thus confirms the order of October 7, 2020 in which it was detailed that after receiving the matter from the Examining Court number 6 of Malaga – which was inhibited – and after receiving a statement from the author of the shots in September, the Prosecutor’s Office requested the provisional dismissal regarding a possible crime of threats to members of the Government.

The magistrate in the order heeded that request and, given that the facts could constitute a hate crime, he sent the matter to the Malaga investigating courts.

In the resolution, Judge José de la Mata – now outside the National Court – explained that the incidentally proven facts are that a video was disseminated through networks in which the investigated fired a series of shots with a repeating shotgun 12 gauge against a series of folding metal silhouettes that had photographs of the President of the Government, Pedro Sánchez; the second vice president of the Government and leader of Podemos, Pablo Iglesias; the Minister of the Interior, Fernando Grande Marlaska; the Minister of Equality, Irene Montero; and the deputy of United We Can Pablo Echenique.

While the shooter shot down the silhouettes with the photographs of the political leaders, another unidentified person shouted “Sentencia”, while the investigated made a “comb” at the camera. The car recalls that the events occurred at around 4:00 p.m. on an afternoon in May 2020 at the Lince armory facilities, located in the El Viso polygon in Malaga, and states that the weapon, a Mossberg Maverick, was property from the armory.

Article 504 of the Penal Code

After this analysis of the event, it is pointed out that there is no record that the investigated person recorded the video and disseminated it, nor does it appear that the scene was produced with the aim of being recorded and broadcast “with a view to intimidating the authorities” indicated.

Bearing this in mind, the magistrate recalls that article 504 of the Penal Code, against high bodies of the nation, aims to protect the institutional dignity of certain organs of the State and not of specific individuals. Therefore, the threats must be directed towards the Government and it is not enough that they are individualized in one or more members of the Executive.

In addition, it adds that these threats must have the intention of the person making them to exert pressure on the victim in order to frighten him. And it clarifies that in the case under analysis “it is not possible to recognize those elements.”

On the one hand, it points out that the action is not directed against the Government as a State organ and its objective is not to exert pressure through threats, and on the other that it cannot be considered “that there was a serious, real and persistent threat of a bad future,” unfair, determined, possible, causing a natural intimidation and dependent on the exclusive will of the active subject “.

And he says that although the content of what is disseminated produces alarm and repulsion, it is necessary to “flee from easy generalizations” and emphasizes that the use of these photographs of members of the Government does not infer without more than attacking the institutional dignity of the coalition Executive.

The order also insists that from what was declared by the investigated, it cannot be affirmed that there was premeditation to intimidate the Government, that the photographs were already in the armory and that there is no record that the recording of the action was planned. “Apparently, there was no other purpose than to spend some time and kill time with the improvised idea of ​​doing target practice in the armory,” he adds.

At this point, it is also indicated that, both the investigated person and whoever recorded him or the person who speaks in the video, did not seek mass dissemination but only sent it by WhatsApp to another person, and that then from there it was ” viralized “in an uncontrolled way” beyond his control. And it highlights that the investigated has expressed his regret for what happened, has shown repentance and has requested forgiveness from the offended people.

Finally, and given that the prosecutor understands that the facts may coincide with a hate crime, De la Mata recalls that it is not the competence of the National Court to attend to such cases, therefore, the inhibition in favor of the investigating court is of interest of Malaga that corresponds.