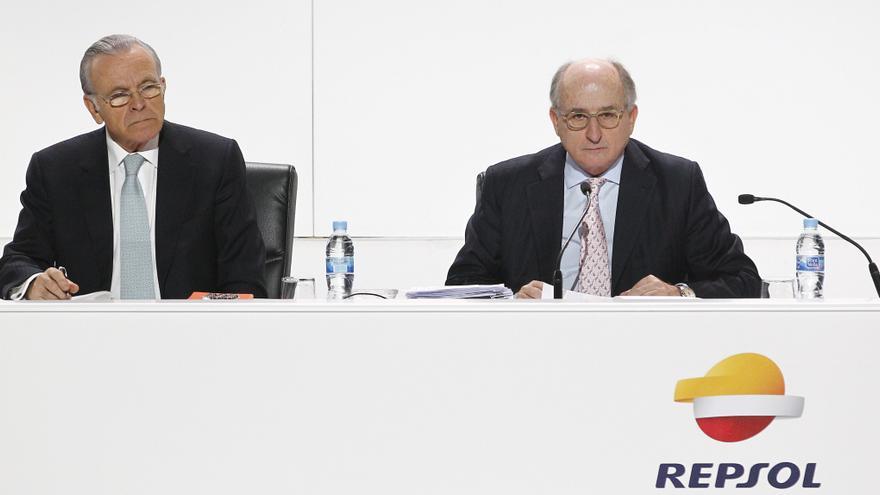 The judge of the National Court Manuel García-Castellón has decided to archive the case against Repsol and CaixaBank, as well as against the president of the oil company, Antonio Brufau, and the former president of the financial entity, Isidro Fainé, for the hiring of commissioner José Manuel Villarejo to spy on the then chief executive of Sacyr, Luis del Rivero, as reported by El País and confirmed by elDiario.es.

In this separate piece of ‘Tándem’, the ‘Wine Project’ is investigated, for which Villarejo was commissioned to spy on Del Rivero to prevent the latter from taking control of Repsol – of which CaixaBank was one of the major shareholders – through an alliance with the Mexican oil company Pemex.

“The hiring did not fall under the control of the President of the company, but in that of its Security Directors. Therefore, without indications that indicate that the Presidents of the companies intervened directly in the investigated facts, it is not It is possible to transfer to said Presidents an obligation of corporate supervision and oversight, which is delegated to the competent bodies for this, “the order states.

Although the magistrate has lifted the accusation against Bufrau and Fainé, the former Caixaban security chief and former police commissioner, Miguel Ángel Fernández Rancaño, and the former director general of the financial entity, Antonio Masanell, would continue to be investigated. As for Repsol, Luis Suárez de Lezo, director, secretary of the board and person of the maximum confidence of Brufau would continue to be charged; former commissioner Rafael Araújo, former director of Corporate Security; the former deputy director of Security and former military Rafael Girona; Joaquín Uris, former corporate director of Wealth Management; and Juan de Amunategui, former Corporate Director of Patrimonial Services.

Regarding the companies, Judge García Castellón justifies that they are not kept charged as legal persons because “it is sufficient to be able to configure the system on which the criminal responsibility of the legal person rests, which can be verified, as is the case in the present case. , that there was a culture of compliance with regulations duly established in society, and that the program shows obvious features of effectiveness in its operation “, despite the fact that both companies have recognized the hiring of the commissioner to do work.

The magistrate justifies it by pointing out that “the existence of a regulatory compliance system cannot be measured from the requirement of ‘absolute effectiveness’ so that its mere existence prevents the appearance of any crime, but from the capacity of the corporate entity to prevent, and where appropriate, react effectively to the commission of the crime. ”

In this way, the judge agrees the provisional dismissal with respect to Caixabank and Repsol because “the documentation provided” by the companies “allows verifying that the prevention mechanisms implemented existed and were adequate, regardless of the final occurrence of the facts under investigation. “. Thus, it exempts them from criminal responsibility because “they had a regulatory compliance plan and a culture of compliance implemented in the entity at the time of the events under investigation. Caixabank and Repsol had adequate measures in place to prevent the commission of the crimes under investigation. within their activity “, even if the alleged crimes had been committed.