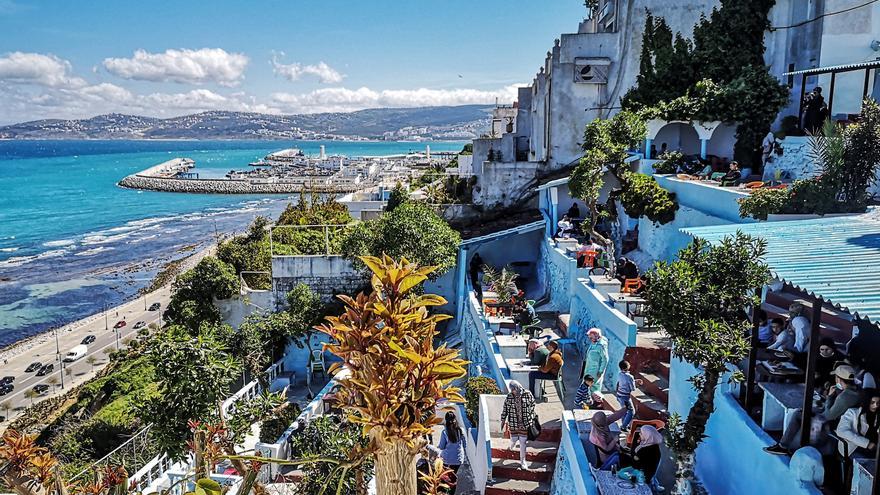 Tangier (Morocco), Jun 30 (EFE) .- The mythical Hafa café in Tangier, opened in 1921, is now one hundred years old, trying to barely preserve a countercultural identity to which figures such as the Rolling Stones, Juan Goytisolo or Paul Bowles.

The café, which consists of several terraces that overlook the Strait of Gibraltar, with the Punta de Europa in the background, is one of the inevitable places in every tourist guide and favorite Instagram background.

It is a place without luxury or glamor, known for its simplicity, its whitewashed and indigo-stained walls, with uneven furniture that includes tiled tables and clay pots of different sizes and colors.

It was founded by a young Tangerian named Mhamed Alouch (1901-1999), who with only 20 years old opened this place as a leisure space for the inhabitants of the Marchane neighborhood, which was then the first extension of the Medina of Tangier, the urban nucleus of the present city.

Although Alouch thought more of the residents of the neighborhood, the cafe soon attracted the large foreign colony that lived in Tangier in the mid-20th century, and later the artists who visited that rogue Tangier. They were the ones who made the place world famous, according to the writer Rachid Tafersiti.

This writer, born in Marchane in 1944 and who defines himself as passionate about his hometown, has honored her with works such as "Tangier, realities of a myth" (1998) and "Tangier, city of dreams" (2002).

The Spanish writer Juan Goytisolo - who spent several years spending the summer in Tangier - was one of the "culprits" of Hafa's fame, recording a television program from there in the late 1970s. Coffee appears profusely cited in his "Vindication of Count Don Julían", as Tafersiti recalls.

Goytisolo would later say that he regretted making the cafe famous for attracting tourists and thus contributing to its loss of identity.

Other illustrious visitors to the café were The Rolling Stones, intellectuals such as the French philosopher Bernard-Henri Lévy, the American writer Paul Bowles and the Chilean painter Claudio Bravo. Some, like Jack Lang (former French Minister of Culture) have ended up buying an old house next to the café.

However, for Tangier intellectuals, Hafa rather evokes its most emblematic novelist Mohamed Choukri, author of "Naked Bread" (1972) and "The Time of Errors" (1992), who took advantage of the tranquility of the place to write your texts or receive your guests from all over the world.

Tangier-born professor of English language and literature at the University of Tetouan Khalid Amin recalls that as a student he would go to the café just to see important figures in Moroccan and world literature up close.

"For me, the Hafa was a place of cats, tea and famous personalities," he says.

According to Tafersiti, the cafe's founder was known for his love of cats and every morning he went to the market to buy fish from them, which made the place a favorite place for these animals.

Several of Hafa's admirers, such as Tafersiti and Amin, regretted that the cafe has started, over the past twenty years, to lose its authenticity due to the multiple extensions and the removal of trees and pergolas that provided some shade for the patrons. .

The current owner of the café, Abdulrahman, is Alouch's adopted son and has been working at the café since 1971, when he was 16 years old. He assures, in front of his critics, that he has maintained the authenticity of the place.

Al Hafa has happened what to the city of Tangier: it is no longer what it was because it does not attract artists, bohemians or people of dissipated life. His clientele is now local people, and the smell of peppermint is more common than that of hashish.

Tafersiti points out that there is only one thing that will never change and that is the eternal landscape of the Strait of Gibraltar: "In spite of everything, coffee continues to be a symbol of Tangier, located at the meeting of the Mediterranean and the Atlantic, it is a bridge between the West and the Levant and a space for coexistence between religions and social classes ", says Amin.