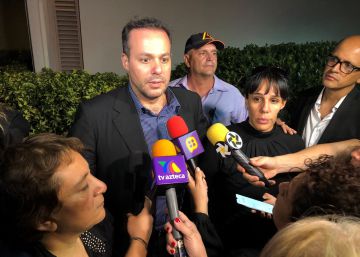 The Mexicans barely recovered from the news of the death of singer José José -one of the top figures of the Mexican folk song, who died on Saturday at age 71 — when a question captured national attention: where is the musician's body? The mystery began on Sunday, when one of the singer-songwriter's children, José Joel, 43, showed up at a funeral home in Florida where his father's remains were supposedly. In the place, however, a manager said that there was not the body of the so-called "Prince of the song." Then began a desperate search followed closely by local and Mexican media reporters in much like the soap operas that succeed in Mexican television. “We need to know first that my dad is already deceased, immediately after doing an autopsy and then being able to take him to Mexico,” said José Joel.

He and his sister, Marysol, say they don't know how and where their father died or what happened to the interpreter's body. Love ends, while accusations and reproaches are launched with another half sister, Sarita Sosa, the singer's youngest daughter with her third wife. His widow, Sara Salazar, does not know the whereabouts, generating a controversy that has unleashed all kinds of speculation on social networks. "Let it be very clear, we are not fighting money at any time, nor the inheritance, much less," José Joel told the media at the funeral home in Miami where he moved from Mexico.

At the center of this controversy is Sarita Sosa, with whom Jose jose He lived in Miami, where he had moved more than a year ago to treat his weak health, which had worsened by a pancreatic cancer detected a few years ago, which worsened the torture of the Mexican idol. Sosa has given contradictory statements, but without specifying where his father's remains are. His half brothers said that Sarita does not answer their calls, so they decided to travel to Miami to clarify the mystery. “We are crying; we were a big one, ”said José Joel, who has requested help from the Miami authorities. Sosa, meanwhile, responded in a statement released by Florida media that “we do not have access to the body, the laws of the United States are very strict. Unfortunately, not even his wife can see the body. ” He said, however, that they are planning the funeral of the singer-songwriter, which will be held in Mexico. “We guarantee you can watch it. We apologize for the silence, we have had such a difficult time and we do not wish it on anyone. ”

The dispute between brothers for the remains of José José reveals the family differences around of the interpreter of The sad and could be the beginning of a fierce fight for rights over the vast artistic work of who in Mexico is considered an idol, whose songs served to mourn sorrows of love, brighten the night in a karaoke or accompany long watered evenings of tequila or mezcal. Since his death was known, Mexican radio stations have programmed marathons with their songs, without anyone appearing to get fed up with the caramelized verses of the The prince. Convened by cultural authorities, thousands crammed a Clavería park, the middle class neighborhood where the interpreter grew up and in which there is a statue in his honor, to remember it to the rhythm of his best-known songs, reports France Presse. "He was a great figure because of his great voice, but above all because of the sensitivity he had (...) For everyone, he was a man of the town," Rogelio Cuevas, 86, who was his neighbor told AFP. The capital authorities announced that on October 4 a karaoke will be organized with interpreter themes at the busy Alameda located in the historic center of the city. It is a love that, contrary to what he sang, does not end, so the family fuss over his remains has generated national outrage.

“The funeral for a great person, father, legend, as José José was, takes time to plan. We do not want, nor will we do anything in a hurry. He was not only a prince, he was and is our king. It is taking us time to coordinate the best (as it deserves) for our idol. His body is resting in peace and he will do so until the day of his evening, ”said Sosa, 25, who has rights to his father's legacy, in his statement. But until Monday the question that eats Mexicans remained unanswered: Where are the remains of their prince?

"My only talent is curiosity," says John Malkovich

The Pablo Milanés concert in Agaete is postponed