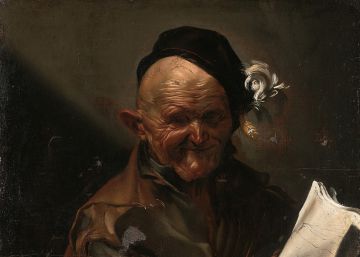 “Here is the boy!” Smiles Stéphane Pinta, an expert at the Turquin cabinet in Paris, specializing in antique painting. The boy is, in fact, an old man who looks like a beggar and a jester. A philosopher: the happy geometer is the title that receives this oil on canvas of 100 x 75.5 centimeters attributed to José de Ribera (Xàtiva, 1591-Naples, 1652), also known as El Españoleto, and for sale in an auction on March 27 at the Drouot house from an estimated price of between 200,000 and 300,000 euros.

The work, discovered in the home of a Brittany family among old worthless paintings, adds another piece in the fascinating puzzle of Ribera’s life and work, born from Xàtiva and emigrated very young to Italy. There, under the shadow of Caravaggio, he consecrated himself as the painter of the “fierce roughness”, the “rough brush” and the “atrocious painting”, as the Parnassian poet Téophile Gautier would describe two centuries later.

A philosopher: the happy geometer, dated by experts in Rome between 1613 and 1616, it is not signed or originally bearing a title. The news of its existence reached the commissioner Benoît Derouineau, of the Daguerre auction house, by a family that had to distribute some inherited lots. Derouineau transferred the case to Pinta to evaluate the price. “The attention [de la familia] He focused on less important cadres and he was completely neglected in the lot. He didn’t pay much attention, ”says Derouineau in the Turquin cabinet room where the riverbank unpublished. This happened in mid-2019. “On the lot there were four paintings: three in the taste of Watteau, of very little value, and this one,” Pinta completes. “Stéphane saw a photo and realized its important character,” he recalls. Derouineau. “I told Benoît: ‘You have to bring the paintings,” continues Pinta.

The key? “The character was Ribera’s favorite model in Rome,” explains Pinta. But the identification of the already known model was not the only factor. “Also the writing: its extraordinarily strong and spontaneous character, the way to paint without compromise,” he says. The Spaniard painted fast, almost impulsively: the picture portrays that gesture. “Italians have this wonderful phrase: ‘The pittura è cosa mentale’. It is the mind, the brain that paints. The hand only makes the gesture, ”argues the expert. “The difference with the copy is that, in the copy it is the eye, with the hand, that retranscribes, without the intervention of the brain, without the inventiveness, without the search, without the original side.”

The reference to the copy is not free. Shortly after discovering A philosopher: the happy geometer, Another person contacted the experts. He said he had the same picture. They immediately saw that it was a copy. “The interesting thing is that [la copia] He had been in Brittany since 1850, ”says Pinta. And, if the copy was in Brittany since that time, it means the original too. From his previous itinerary – how he went from Rome at the beginning of the 17th century to Brittany of the 19th century – nothing is known.

Ribera’s identification as author of the painting could not have been done 20 years ago. Until 2002, when Gianni Papi, a great expert in Ribera and Caravaggio, published the article Jusepe de Ribera to Rome è il Maestro del Giudizio di Salomone, the mystery surrounded the Roman stage of Ribera, prior to that of Naples where he achieved fame. Daddy established that an anonymous painter known as the Judgment Master of Solomon was Ribera. And the bizarre character of the painting discovered in Brittany appears in several paintings by the Master of Judgment of Solomon. That is, from Ribera.

Another key element: it is known, by one of Ribera’s first biographers, that he asked to open a window on the roof of his workshop. “It was to have the zenith light,” says Pinta pointing to the picture. “And that is what we see here.”

I caravaggiesco in A philosopher: the happy geometer it is not the light, or not only, but the representation of the philosopher as a man of the street. “The great innovation of Caravaggio – unlike Rafael, who shows beautiful Madonas in flowery fields – is to look for models in the dirty, the ugly. It is not necessarily chiaroscuro, ”observes Pinta. “And Ribera follows in his footsteps: the guy in the painting is atrocious.” The horrendous becomes beautiful, poverty in the highest purity: geometry. As Gautier wrote to Ribera, “there are hearts captivated by the love of the ugly and you were one of them. “

In a few months, several paintings have been put up for sale in Paris as a result of fortuitous findings: masterpieces hidden in a loft, or hung on a wall without anyone appreciating them, and discovered after years or decades in oblivion. A small painting found in the summer of 2019 in the home of a nonagenaria north of Paris, when it was going to move to a residence for the elderly, turned out to be a work of the Italian primitive Cimabue (1240-1302). In October it sold for 24 million euros. In June of the same year an anonymous buyer was made with a painting discovered five years earlier in a loft near Toulouse and attributed to Caravaggio (1571-1610). “There are people who wonder: ‘Let’s see if I will also have something,” says Stéphane Pinta, of the Turquin Cabinet, who authenticated the works. “The history of caravaggio It made people think that there may be pictures that we don’t pay attention to and that deserve to be studied. ”

Why humans are easy prey for pandemics | Babelia