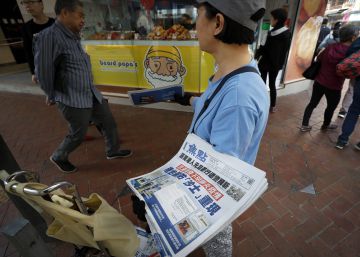 When two days ago the Chinese authorities reported that the mysterious pneumonia of Wuhan City was due to a new strain of a coronavirus similar to that in 2002 caused the SARS epidemic (severe acute respiratory syndrome)They called for calm, ensuring that until then all patients evolved normally. Just two days later, the outbreak has claimed its first fatality.

The Wuhan Municipal Health Commission, a population located in the center of the country and capital of the province of Hubei with 11 million inhabitants, announced this morning that a 61-year-old man has died as a result of the condition. Of the 41 people diagnosed to date, seven remain in serious condition, while two others who no longer had symptoms have been discharged.

The authorities, however, have wanted to send a message of tranquility, ensuring that no new cases have been detected since January 3 and that no member of the medical team has been infected. "There is no evidence that it is transmitted among humans," said a spokesman for the agency. "People who have been in direct contact with the sick, including healthcare staff, have not been infected."

This mysterious ailment arose in Wuhan last December. Most of the patients worked in a fish and shellfish market where live animals were traded, where it is suspected that the origin of the pathogen can be located. Since then, the area has remained closed and quarantined.

Wang Guangfa, a specialist in respiratory medicine at the First Hospital of the University of Beijing and a member of the research team that last week managed to isolate the genetic sequence of the infectious agent, has assured that the situation of the patients and the general conditions of the outbreak are “low control ”in an interview with the national public television CCTV. However, among the population, the proximity of Chinese New Year, which will take place on January 25, in just two weeks. On the occasion of this national holiday, it is tradition that people return to the family home, in what it means the largest human migration in the world with more than 3,000 million trips: an ideal scenario for the outbreak of an epidemic.

The infectious agent could have already exceeded China's borders. In South Korea, the woman who entered last Tuesday with a similar picture after a business trip to Wuhan remains stable. The Korea Disease Control and Prevention Center (KCDC) has confirmed that the patient is still in isolation and that health authorities are monitoring her progress. In Hong Kong, 54 people have been admitted with respiratory problems after visiting the Chinese city in recent weeks, the autonomous region reported last Friday and 31 of them have already been discharged.

Coronaviruses, which are named after the crown shape they adopt under a microscope, often attack the airways of mammals. To date only six were known. Four cause mild symptoms similar to those of a cold. The other two, on the other hand, are sadly famous: in 2002, the SARS coronavirus, originating in China, caused the death of more than 700 people all over the world; while in 2015 the MERS (Middle East respiratory syndrome) left 449 dead.

In a statement released after the discovery, the World Health Organization opted not to establish special measures for travelers visiting China. “New coronaviruses appear periodically [...] and China has a solid health system, capable of responding and managing outbreaks of respiratory infections, ”said the text. The institution, however, noted that "in the coming weeks more comprehensive information will be necessary to better understand the current status and epidemiology of the outbreak."