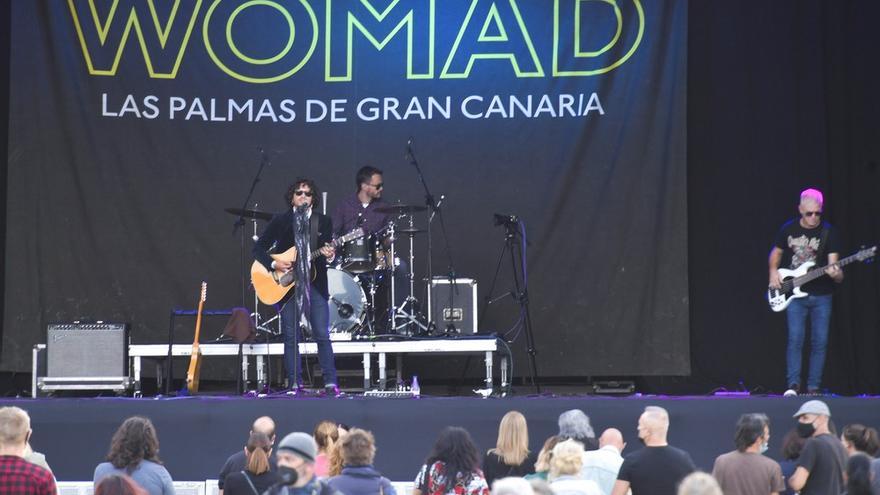 The musicians want to vibrate

Woodhands tried to take a tour of modern electronic rhythms from different parts of the world and hoped that people would dance, although “it will be a difficult thing because you have to remain seated inside the Miller building.” Muti, meanwhile, offered a rock concert to make the audience “enjoy and move, even if it was under the mask.” Mauro said it was the first time he had traveled to the Islands. “I am very happy to participate in this festival, one of the best in the world.” Yesterday he was willing to sing and dance with the audience. Sánchez explained having already come to the Womad, which has taken her to travel to Australia or New Zealand and to visit countries and live always wonderful experiences, “meeting other musicians and making connections.”

To provide a background on these musicians, it can be noted that «Woodhands is a project that started in 2008 to unleash the most experimental club sounds that haunted the head of Carlos who, since he was a teenager, had focused on sounds like jazz , soul, funky and hip-hop, but that later gave place to a multitude of different styles, always oriented to the dance floor ». In 2010, to fill a void in Gran Canaria, he created Pub Pelukas, a virtual window so that everyone with equal concerns could develop them.

For its part, Amparanoia has released several albums to the market and has made tours, the last one when they celebrated the 20 years since the release of their first album. Said Muti is a young composer, singer and guitarist with two albums to his credit, with a sound that transits rock, indie and soul. He has power in his lyrics, forcefulness in his voice and the energy of an overwhelming live performance. The Canzoniere Grecanico Salentino group includes artists of popular music from Salentina and offered, in addition to the concert, a music workshop in their style.

The festival manifesto was also read yesterday. Jorge Hernández Duarte, president of the Fundación Canaria Yrichen, was in charge of doing it this year. The Womad is held in the capital of Gran Canaria until tomorrow, and Hernández spoke a few words from the Santa Catalina stage, last night.

He stressed that “it is exciting to celebrate the festival again in the post-covid era.” He offered a hug to the families who suffered from this disease. “We are in the first Womad after the hardest part of the pandemic, but we must be alert and respect the most basic health regulations, as we are doing in this festival. We ask you for the utmost care so that everything goes well and that only the cultures of the world are the protagonists of this long-awaited meeting, “he said.

He regretted the damage that the volcano on La Palma, which is also his island, has left on the population and recalled the victims. “Solidarity with La Palma has exploded throughout the Canary Islands, throughout Spain and throughout the world. Material aids do not stop growing and advertising. But it is also necessary that the people of La Palma feel the warmth of all of us and our wishes that everything ends as soon as possible; May greater and better opportunities emerge from the destruction for those who have lost everything. And that the volcano happens as soon as possible to be an ally and not the indomitable beast that it is now ».

He recalled the human tragedy of immigrants arriving in boats. “The Womad is also a movement that tries to intertwine the cultures of the world so that all people know each other better and respect each other,” he concluded.

The Chilean Ana Tijoux and the Bosnia and Herzegovina combo Dubioza Kolektiv will be the references for today, the third night of Womad Gran Canaria-Las Palmas de Gran Canaria, which will be completed with a rich selection of cultural proposals and emerging local and national bands and international.

The Dutch My Baby with their most danceable proposal, the innovative and personal rhythms of Lova Lova from the Congo, the griot culture of Mali that Trio da Kali proclaims, the psychedelic Maghreb blues of Bab L’Bluz, the electronic dub of Tenerife’s The Conqueror Project, the uncompromising rock of the Gran Canaria Foxy Mammals, the guttural arctic sounds of the Norwegian Vassvik or the transatlantic tropicalism of the French The Bongo Hop will converge on the three stages of the international Womad.