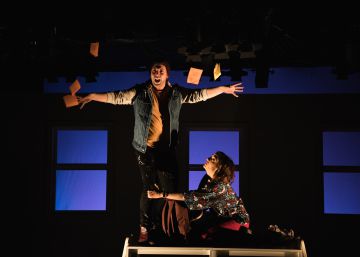 In New York, musicals are also released far from Broadway. It occurs in small theaters where more modest productions bustle in which creativity and risk compensate for the lack of means. These small-format titles tell everyday stories, dramas or complex comedies that touch the public more closely than the extraordinary adventures of the great titles that are seen on the great avenue: they talk about the difficulties of life as a couple, from the jump to the working life or the complicated path of artists who want to gain a foothold. On these common and common but universal concerns, versa Any day, the Castilian adaptation of Ordinary days, one of those titles off Broadway that during the month of March can be seen every Monday in room 2 of the New Alcala Theater.

"The play is very simple, four characters and a piano," explains Ferrán Guiu, director of this version, the first in Spanish about the most popular work of the American composer Adam Gwon, released more than a decade ago. "The libretto is about the search for beauty in everyday things and how we influence other people on a day-to-day basis, "adds the artist." There is comedy and emotion, "says Juanjo González, one of the producers.

This New York story is starring two heterosexual couples separated by a generation. Claire and Jason are a couple of thirties who start to live together and whose main problem arises from Jason's desire to deepen the relationship, while Deb and Warren are two twenties with the problems of two young people who begin their careers: a artist looking for his place and a graduate student. "There is something that does not work between them," argues Laura Enrech, actress and singer who plays Deb. “Although they are very personal situations, the characters sing about universal problems, such as finding your own path. That's what we all face, ”continues Enrech. Therefore, he believes, Spanish viewers can also identify with them. "Although the daily rhythm of New York is much higher than here, Madrid is friendlier," he adds.

The musical is full of references to painting. One of the topics is titled Saturday at the Met, which describes a visit of two of the protagonists to the Impressionists of the Metropolitan Museum. Another song plays with the idea of ​​"big picture", a concept that refers to that global and definitive vision that each one has of his professional and personal life. "There is a parallel between the brushstrokes that Monet gave and the people who inhabit a large city: they are those brushstrokes," says the director.

The work arrived in Spain through Barcelona. There, Ferrán Guiu directed in 2015 the Catalan version entitled Dies normals. The director met her with the diva of the musical Audra McDonald that she included in her repertoire I'll be here. "I fell in love with the score and bought the rights," Guiu recalls. Adam Gwon's songs for the play reveal his passion for Stephen Sondheim, author of Into the Woods or Sweeney Todd and by Andrew Lippa, creator of The Addams family. Gwon, American, has always developed his career in his country, Ordinary Days, however, it premiered in London in 2008 and a year later crossed the puddle. Since then, it has also become a favorite of theater schools and groups amateur. "He has even ridden recently in a bar in London," Gonzalez says.

Madrid's production of Any day It is not amateur, nor has it been programmed in a pub. Those responsible are a group of musical theater professionals who take a place on their day off to continue acting. Therefore, precisely, it is only scheduled on Mondays. For a while, these artists change their roles in The Lion King, Anastasia or The crazy cage to get into the skin of the four young New Yorkers looking for their place in the world. "This project stems from the illusion and passion of a group of people in love with the work and musical theater," says producer Juanjo González.