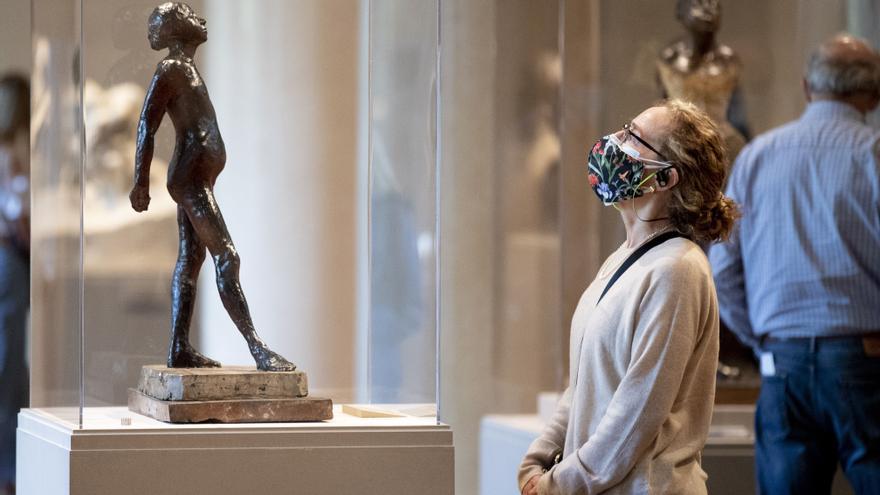 Washington, May 14 (EFE) .- The Smithsonian Institute in Washington, owner of the largest collection of museums in the world and one of the main claims to visit the US capital, reopened the doors of several of its centers on Friday, as a symbol of the return to normality in the country.

“Culture and beauty are back in Washington,” said the American first lady, Jill Biden, at the Museum of African American History and Culture, which has opened for the first time in more than a year after the closure caused by the pandemic. of coronavirus.

The reopening this Friday of the museums located in the Mall, the esplanade with monuments that are in the center of the city, broke with the desert scenes that it had shown in recent months.

Food trucks, families strolling, and people going in and out of museums offered a certain sense of normalcy.

MANET AND VELÁZQUEZ COME BACK TO LIFE

In the National Gallery of Art, the second most visited museum in the country after the Metropolitan in New York, the paintings of great masters such as Velázquez, Manet, Picasso and Van Gogh were once again seen by the public.

Although the capacity is still restricted and entry is only allowed with prior reservation, the director of the art gallery, Kaywin Feldman, explained to Efe that “it is the beginning of a new era.”

“We are excited to welcome the public again,” said the official, who stressed that the building is designed to have visitors and “the wonderful collection” that houses needs people to really come to life.

The museum, in fact, had to celebrate its 80th anniversary in March with its doors shut tight.

This was especially difficult, said Feldman, who recalled that US President Franklin D. Roosevelt in his inaugural address in 1941 called the museum a “gift to the nation” that would allow Washington to permanently see masterpieces of the history of the United States. universal paint.

“Many of the visitors thank me because for them the museum was food for the soul, and we are delighted,” he added.

The American Indian History Museum has also resumed activity, as well as the National Zoo in Washington, but others, such as the Space Museum and the United States History Museum, will still be closed for a few more weeks.

The mayor of the US capital, Muriel Bowser, has indicated that as of June 12, the city will return to normal activity without any type of restriction.

The masks were still ubiquitous in the museum, a sign of the persistent legacy of the pandemic, despite the fact that this Thursday the Centers for Disease Control and Prevention (CDC) modified its guidelines so that vaccinated people already they can walk outdoors and even be indoors without that garment.

“If you are vaccinated, you can start doing the things you stopped doing. We have all longed for this moment,” CDC Director Rochelle Walensky said Thursday.

The reopening of the museums is, therefore, a symbol of the restart of a gradual return to normal life in the United States after suffering the severe blow of the pandemic, since it is the country with the highest number of deaths from covid-19 of the world with more than 580,000.

Almost 110 million Americans, more than a third of the population, are already fully vaccinated.

The goal set by the US president, Joe Biden, for the return to normality is next July 4, when the traditional Independence Day is celebrated.

The new guidelines are, in the words of Biden this Thursday, a “milestone” that has been made possible thanks to the work of scientists, doctors, nurses, pharmacists and local authorities.

The president also highlighted the courage that the American people have shown during the year of the pandemic and thanked him for having fulfilled his “patriotic duty” to get vaccinated.