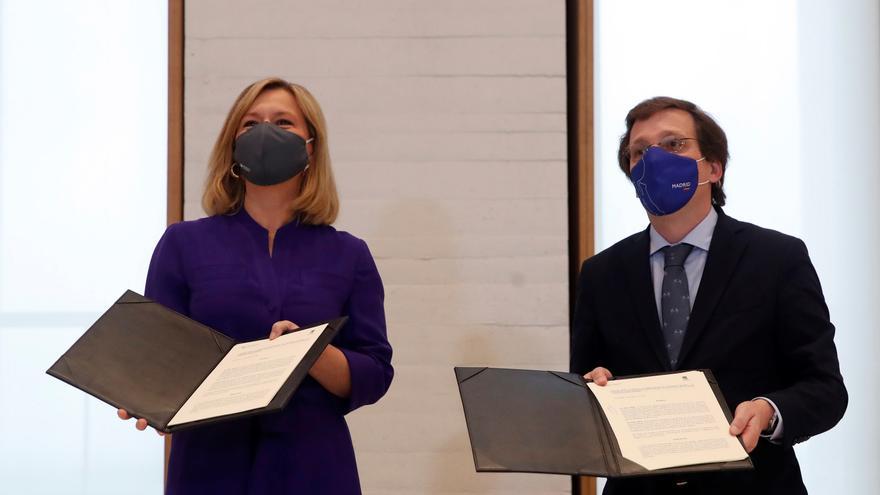 Madrid, Feb 3 (EFE) .- The president of National Heritage, Llanos Castellanos, announced today that the Museum of Royal Collections, which includes the most relevant collections of National Heritage and has suffered numerous delays, “will be in a position to open its doors by the end of 2022 “.

Castellanos announced it this Wednesday at the Museum of Royal Collections, which has been opened to the press for the first time for the signing of an agreement with the Madrid City Council to undertake a series of works that provide five new entrances to the historical complex of the Royal Palace and its surrounding gardens.

The future Museum of Royal Collections -whose opening was scheduled for 2020 although it is delayed until 2022- will offer a panoramic vision of fifteen centuries of Spanish history, will be a diffuser of royal spaces and property and will be directed by Leticia Ruiz.

The new building, which began to be built in 2006, will have more than 40,000 square meters of useful surface spread over 14 floors and will serve to publicize all the richness and diversity of the royal collections through its almost 155,000 pieces.

“This agreement will now allow this project to become a reality. This is the heritage and heritage museum of Spain, we have in our hands the greatest museum challenge in all of Europe,” said Castellanos, who has in this art center the most important project of his mandate.

The museum is configured as “a review” through the history of Spain: “For what we have been and what we have built”, highlighted the president of National Heritage.

The agreement signed this Wednesday by Castellanos and the mayor of Madrid, José Luis Martínez-Almeida, will allow the entire historical complex of the Royal Palace (Royal Palace, Plaza de la Armería, Campo del Moro and Museum of Collections) to be opened to the public. will integrate better in the city, according to both have highlighted.

Pedestrians will be able to make a journey from the Casa de Campo to the Thyssen-Bornemisza Museum through an integrated pedestrian corridor that does not exist now. “The Madrilenians win a unique urban space”, Almeida highlighted.

Once the works of the new access to Plaza de España are finished, the integration of the complex will also allow walking from the Casa de Campo to the Temple of Debod from the same pedestrian corridor.

The new accesses will make it possible to place Madrid among “the great European capitals”, and Madrid residents will gain a “unique urban space”, said the mayor, who also stressed that it is a project that is also very important in terms of the recovery of the city ​​tourism.

Although the Royal Collections Museum will open its doors at the end of 2022, the works on these new entrances will be completed between this year and next, with the commitment of both institutions to open them as they are ready.

Both Castellanos and Almeida have highlighted the importance of institutional collaboration between both entities and support for the private sector project.