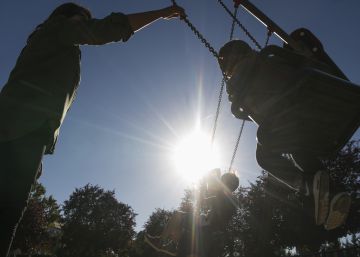 The higher the socioeconomic level of the parents, the more cognitive development of the children. Much scientific literature supports this statement, always talking about averages, not concrete cases. What had not been addressed so much is how the status of the father and mother influences, separately. Is he study that a group of researchers has published in the journal Sanitary Gazette, with a fairly clear conclusion: while the mother's studies weigh significantly on the development of the child, in the case of the parents the role is taken by their social class.

The researchers studied three social determinants whose influence on cognitive development is well documented: income, employment status and educational level. The limited economic resources of households, they indicate, influence low investment in education, lower quality housing and neighborhoods with fewer community services. The type of employment of parents can cause stress and more problematic family relationships. And the academic level of parents usually reflects their ability to solve problems.

In the study, in which 525 children of five and six years old participated, it was found that these three factors weighed 10% in the cognitive development of the children, evaluated through standardized tests that measure their psychomotor skills, verbal ability or executive functions . Of all the factors, they found that there was a significant relationship between the type of occupation of the father, the academic level of the mother, his age (in intermediate ages there was more cognitive development on average than in the older and younger ones) and his intelligence. There was also a correlation with gestational size: the smallest had worse scores. The researchers also measured the use of some toxic substances during pregnancy, of which the heaviest was tobacco in mothers during the first trimester.

Llùcia González, one of the researchers, explains that the conclusions may have several explanations: “In the case of social class [que en el estudio está determinada por el trabajo del progenitor] in the case of men it is usually more stable, because there are fewer entries and exits from the labor market and mothers are more likely to quit their jobs to be raised. ” In the study they consider the hypothesis that fathers usually provide material goods while the endowments of mothers are based on their own academic achievement. In addition, it seems that education plays different roles: the mother's education is relevant for academic achievement in the child's early years, while that of the father is more important in youth.

Mario Fernández, a neuroscientist at the Autonomous University of Madrid, explains that a child's brain is "very plastic", that is, very sensitive to environmental conditions, for good and for bad. "Therefore, the relationship with parents is decisive for the proper development of cognitive skills," he says. “On the other hand, intelligence has a genetic component: adopted children have a base intellectual level more similar to biological parents than to foster parents. Although it is also true that it is easier for a child with university parents to go to college. That is, the students of the Pilar school have a much higher rate of graduates than the students of a school in Villaverde (south of Madrid). ” The latter, explains the researcher, has to do with the environment, the socioeconomic level of the parents and the social class. “The interaction between all the variables is complex. The study shows this correlation between the cognitive development of the parents and that of the children in a positive way, ”he concludes.

Llùcia González emphasizes the need for an awareness of these problems at the political level, because "it is there that measures that alleviate them can be promoted." "It is not easy to investigate health inequalities: social conditions are often perceived as static and more structural, and therefore more difficult to modify," he reflects.