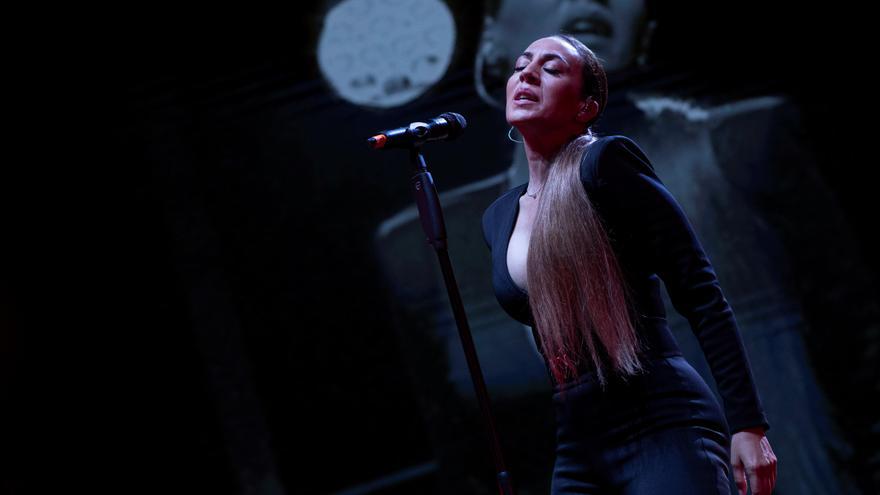 Pamplona, ​​May 15 (EFE) .- The most intimate Mónica Naranjo has overflowed with talent tonight in Pamplona on her return to the stage after a break since last year within her ‘Puro Minage’ tour, a concert in which the public he has been able to rediscover his songs with the only company on stage by the pianist Pepe Herrero.

Like someone who observes for the first time the beauty of a washed face or a naked body, with this proposal Mónica Naranjo has allowed the songs of ‘Puro Minage’ to be rediscovered, giving them a torn emotion with a certain melancholic tint that has clearly shown that on less it is more and few artifices are needed for a voice like his.

Overflowing complicity behind the piano has been Pepe Herrero, who has been in charge of opening this appointment alone, practically in the dark, until the audience breaks with the entrance of Mónica Naranjo singing “Take You Now”.

The evening continued with what the artist has described as “one of the most sexual songs” that she has ever performed, ‘Now now’, followed by ‘How impossible’, ‘Bitch in love’, ‘Immensity’, ‘You were always mine ‘,’ Loving madly ‘,’ Abyss’, ‘My life for a man’, ‘E Poi’ and ‘E penso a te’.

The finishing touch was ‘Survive’, a song with whose lyrics, he recognized, he cried the first time when he read it and which he has given rise to reflecting on that over the years he has learned that “you don’t have to survive, you have to to live”.

‘Minage’ was very important to many people, company in suffering and a place of refuge from a world that is too hostile but also liberating, and this has been evident in the testimonies of its fans who, in a series of videos, have given he tells throughout the show what this album was and still is for them.

This time without offering their music live has not been alien to both interpreters, who despite their career were “especially nervous” to return to exercise “in a place that represents so much,” the singer acknowledged.

Precisely the simplicity of the voice with capital letters accompanied by a classic instrument par excellence such as the piano have given more strength to the artist’s lyrical overtones, especially present in songs like “Amore”.

In reference to this song, which on his album is presented as a duet with Nek, he has shown his frustration at not having yet been able to interpret this song with him, although in the same way his hope has been strong that that moment can come to fruition. throughout this tour.

He could not imagine a better setting for this proposal than that of a Navarra Arena pavilion dressed with hundreds of tables dimly lit with warm lamps and surrounded by an audience of contained emotion difficult to see in those pre-pandemic times of crowds standing in front of a stage.

The public has finally been able to enjoy the voice of Mónica Naranjo after the show, scheduled for April 17, was postponed due to the perimeter closure of Navarra, which made it impossible for a high percentage of people from other communities to attend. purchased your tickets.

After today’s concert in Pamplona, ​​Mónica Naranjo will make a new break to dedicate herself to the recording of ‘Amor con bail’ for Netflix, but she will return on July 3 in Andorra to begin, so yes, a series of concerts throughout all summer for different locations of the national geography.