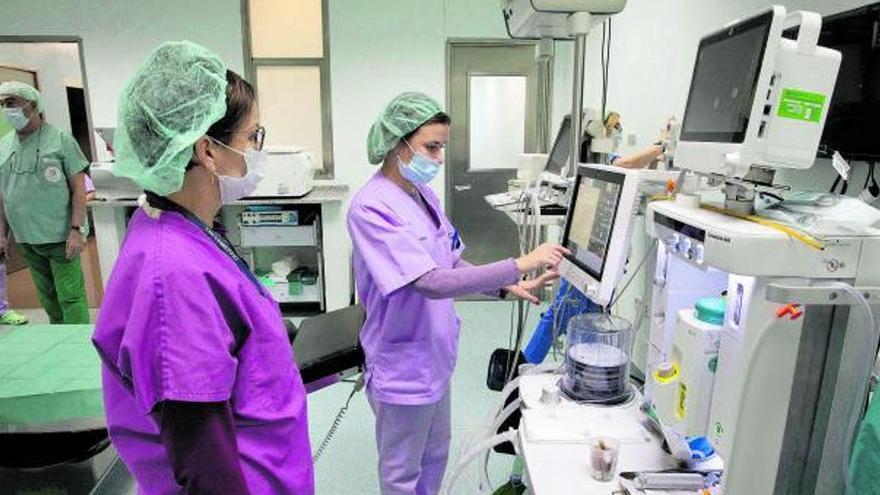 The shutters on the windows are almost completely open. The midday sun lights up the street where the clinic is located. It's Wednesday. Any one. In front of the journalists, the door of the Mediterrània Mèdica center, in Valencia. It is a quiet hour. A quiet street. Today there is no one waiting for the women who come to terminate their pregnancy at the entrance. But there has been. On several occasions. Some ultra catholic associations stand up to the clinics that exercise the abortion with one goal: reverse a decision of an adult based on a right contained in the legislation Spanish. With all of that implies.

Words, texts and acts. Candles simulating a wake, banners with denunciation phrases and even attacks on clinics with stones (The latter occurred in the center that is the protagonist of this report, but in Castellón). However, harassment before abortion centers is not as frequent in the Valencian Community as it is in other territories. But it happens. The clinic that this newspaper visits and others also located in the Valencian territory have suffered episodes of this type for years. Now, they say, since the beginning of the pandemic no problems around. The Congress of Deputies has approved declaring these practices a crime, considering them as harassment.

In fact, last January the Municipal Transport Company (EMT) of Valencia withdrew a campaign from an association against abortion with the slogan 'Praying in front of abortion clinics is great', which had been placed in the form of posters in several marquees in the city, for encouraging harassment of women. The poster itself warned that his campaign could be cancelled"because of the imminent reform of the abortion law" making, precisely, reference to the reforms of the Law of the Abortion and the Penal Code that punish the rallies to harass women in front of clinics who carry out these practices.

"One more form of gender violence"

The medical center is empty. The morning activity is over and part of the twenty workers (they are almost all women) begin to clean up. The atmosphere is calm, quiet. It is neither too hot nor too cold and some flowers try to alleviate the sterility that waiting rooms already have, with chairs prepared to shelter the fears prior to an intervention —in most cases— new and unknown.

A couple leaves the center, he covers her with his arm and they walk slowly. They will return the next day to complete a process that, in this case, is painful and delicate. The way in which women enter and leave the clinic depends a lot on how each one takes the decision, but "what is clear is that bullying is just another form of gender violence towards them". Says Josep Lluís Carbonell, the head doctor and gynecologist of Mediterrànea Mèdica.

He has been practicing abortions since the 1980s, says he is a "pure and tough militant" and celebrates the decision of Congress. "It is an important step, it has taken many years to guarantee conditions of tranquility for women when they decide to have an abortion." However, he says that the Valencian Community is "an exception". There is harassment, "but so-called pro-life groups are less active here than in other communities What Madrid" and the health system is more "liberal". The entire team (in which there are specialists from different fields, including psychological support if necessary) is aware of the importance of understand, accompany and support women who come to the center to make one of the "most difficult decisions of their lives", they define. That is the maximum. Base.

The first thing to keep in mind when attending to any patient who calls on the phone or walks through the door. What do women who come to terminate their pregnancy need? "It must be clear that this is not just another health act, it is an exercise of a right that has to be given in specific conditions, a warm welcome, that patients feel good, accompanied, understood and calm," he adds. Respect, above all, the decision of the woman.

Conditions that are completely altered if before entering there is a group of people recriminating your decision. "When that happens, patients enter badly, accused of murderers. And it is a delicate step for every woman. No one aborts for pleasure, carries many feelings that they carry inside and recognizing themselves recriminated affects them emotionally when it comes to consummating the decided process with a personal reflection. This harassment is unacceptable," he says. In general, says the doctor, women currently go to the clinic calmly. Aware of what they have decided in a thoughtful process.

A clinic in Valencia. Daniel Tortajada

Interruption by free will, in 2010

The abortion law had its first appearance in Spain in 1937. Minister Federica Montseny tried to promote a safe abortion bill during the Civil warafter a first movement in favor of the interruption in Catalonia. With the arrival of the dictatorship, concessions for the interruption of pregnancy would not be granted until 1985. The law approved then only applied to situations of risk to the baby or the mother, malformations or pregnancies due to rape. The rest of the cases were liable to be punished with prison sentences for the woman and the medical professional. Although it was an advance, she did not contemplate the right to a voluntary abortion until fourteen weeks of gestation.

In 2010, with the reform of the law, the interruption of pregnancy by the free will of the woman was approved until fourteen weeks of gestation, a time that is extended to twenty-two in cases of malformations, risks or other assumptions and beyond the twenty-second week (without limit) when there is a fetal pathology incompatible with life and after the approval of a medical committee. It was the "most important" reform to date, since it allows abortion by free choice, voluntarily, meditated.

Until recently, the clinic that Levante-EMV visits was the only private one authorized to perform risky abortions, beyond twenty-two weeks. "With the first abortion law (the one in 1985), patients were scared, they thought it was still illegal and they were afraid of not being able to have children later or that the intervention would leave them with sequels for life. Now that concept has disappeared , women are calmer and more informed, they have it clearer than before". The reason, according to Carbonell, is that "the law has normalized abortion, now we are a normal country."

Is there a profile of women who decide to terminate their pregnancy? Carbonell comments that the women who seek abortions are, for the most part, young people between 19 and 25 years old, "is the most common", although there are also cases of women who are approaching menopause and already have older children and "women in their thirties who do not have children, but do not want to". The ministry details in its 2020 report that the mean age was 29.1 years, although the age group with the highest rate was 20 to 24 years. The doctor adds that Family Planning is very good in Spain. In addition to the fact that "Spanish women are the ones with the fewest children," abortions "have dropped considerably in the last five years." In addition, he adds, the pandemic has made them contain themselves even more.

The clinic that Levante-EMV visits is private, although it also receives, through an agreement with the Generalitat, patients referred from public health centers, which makes it a concerted service, as the doctor says. The center also executes voluntary interruptions of pregnancy before fourteen weeks privately, for a fee, in the same way that they can be consumed in the public system for free, although in the latter case, "there are few hospitals that carry out volunteers".

According to Dr. Carbonell, approximately 10% of abortions are performed in the public network. And it does not move away from the official data. According to those published by the Ministry of Health, in 2020, 91.6% of IVEs were performed in private centers and 8.4% in public centers, a similar percentage to the previous year. The regional area financed, under the budget of the Ministry of Health (interruptions carried out in public centers and concerted in private centers), 70.4% of all those practiced.

Objection to the procedure

This occurs, in part, because, although the majority of the health community is respectful of this procedure, there are doctors from the public health system ("more than one", Carbonell clarifies) who do not agree with abortion, which causes that in some public centers it is not possible to carry them out or that some professionals adopt "a critical attitude" towards patients. "The bad faces or bad comments are the consequence of an objection to the procedure", he comments. He defends that the centers dedicated to this type of intervention provide the warm and understanding environment "necessary so that a woman can exercise her right with peace of mind". Of course, paying.

"We are an economic activity, but there are practices of all kinds in terms of the main objective, ours is the exercise of a right in conditions so that women feel calm and understood." Harassing patients at clinic doors will be considered a crime. Something says that the Penal Code had to be necessary for the fulfillment of a right with freedom.

Carbonell explains how, before the legalization of abortion, women organized themselves to interrupt their pregnancies. "We met in the Plaza del Virgen with a newspaper under our arms, one of them put her house and we performed abortions in kitchens ('les cuines'), because it is where there was a tap with water more at hand", says the doctor. His briefcase, full of all kinds of medical material to carry out the abortion, was complete and "weighed a lot". Practices, then illegal, gave him more than a scare. He was about to go to prison or be left without power to practice. Especially when he helped find the pharmacological formula to interrupt pregnancy in a pill. "It was illegal but they saw that it worked" . But that's another story.