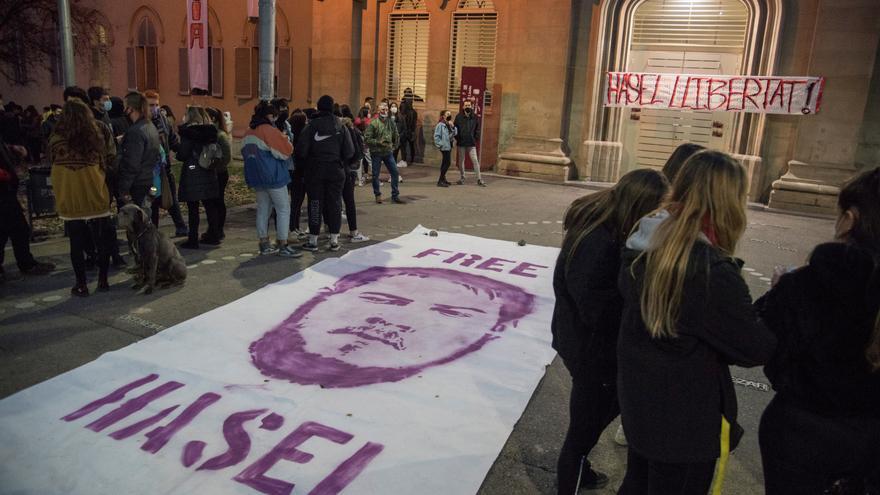 Barcelona, ​​Feb 16 (EFE) .- Dozens of agents of the Mossos d’Esquadra have entered the Rector’s Office of the University of Lleida this morning to arrest rapper Pablo Hasel, sentenced to nine months in prison for crimes of glorifying terrorism and insults to the Crown.

A strong police force, made up of dozens of Mossos agents and a score of vans from the Mobile Brigade, has been deployed since 6.30 am on Tuesday in the vicinity of the rectory to proceed to the arrest of Hasel, whose deadline to enter voluntarily in prison ended last Friday.

Hasel locked himself up this Monday in the rectory building of the University of Lleida “to make it as difficult as possible for the Police” in view of his imminent arrest and with the aim, as he told Efe, of making visible what he considers to be a “very serious attack “against freedoms.

The police, however, have been able to easily circumvent the barricades that had been placed at the entrances of the building by the fifty activists locked up with Hasel in the rectory, who have been cornered by the agents to proceed to the arrest of the singer.

The activists have taken refuge on the third floor of the building while throwing some objects at the agents, although they have finally been encapsulated by the police, who have proceeded to identify them.

Inside the building were also numerous journalists and photojournalists who spent the night with the activists and Pablo Hasel himself.

This Monday, the National High Court rejected once again the suspension of the execution of Hasel’s nine-month prison sentence, recalling that in 2017 he was convicted of a crime of resistance or disobedience to authority, and in 2018 for raiding a premises .

“With this criminal record, it would be absolutely discriminatory with respect to other criminals, and also a serious individual exception in the application of the Law, totally lacking justification, the suspension of the execution of the sentence to this convict”, argues the court.

And he adds that “the campaigns” in his favor “that some people may have orchestrated cannot determine the non-application of the current law, but rather its eventual modification by Parliament.”

Tags: come in, do the, Lleida, Mossos, rectorate, stop, University