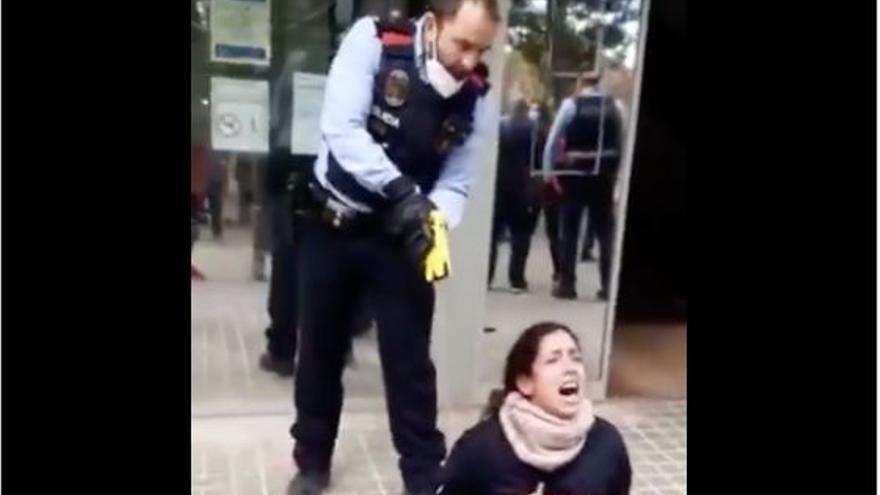 An agent of the Mossos d’Esquadra fired his electric pistol this Wednesday to reduce and arrest a woman in Sabadell (Barcelona). The events occurred around 1pm. when the woman went to a local health center. According to the Mossos, the use of the Taser gun was the last alternative due to the “aggressiveness” of the woman, who would have hit first the health center workers and then the agents.

The director of the Mossos d’Esquadra, Pere Ferrer, has defended that the agents have complied with police protocols when using the Taser pistol, but the young woman, who claims that she received three electric shocks, will denounce the Catalan police. For its part, the center for the defense of human rights Irídia, which advises the young woman, has denounced a “disproportionate” use of the electric gun by the Mossos to reduce the young woman, who ended up arrested for an attack on the authority and damages.

According to the Mossos, the young woman went with her mother to a medical center in Sabadell for a medical appointment and, due to the protocols for the coronavirus, they did not let her mother enter, which caused the girl to become nervous then. The Mossos assure that the young woman hit the toilets and caused damage to the outpatient clinic, whose leaders called the police. The Catalan police also explained that the young woman did not heed the police warning to calm down and was “aggressive” with the agents, so they proceeded to arrest her by using the electric gun.

In statements to Efe, Ferrer has recognized that the images of the use of force by the police are always “harsh”, but he has defended, after analyzing it with those responsible for operations, that in this case the protocols have been followed and that the performance of the agents was proportional and adjusted to the protocols. On the other hand, the young woman has told TV3 that she will denounce the Catalan police for what she considers a disproportionate action: “I am less than 1.60 and weigh 48 kilos, with a key they would have immobilized me quickly.”

In the video of the police action, which Irídia has posted on social networks, where she denounces that the use of the electric gun in this case is “very worrying and disproportionate”, it is seen how the girl is on the ground screaming very nervous, once the agents have already shot her with the stun gun, while her family members ask from a distance to leave her alone. Once reduced, the girl remains nervous on the ground, before a relative approaches to try to calm her down, although the agents ask her to move away. Finally, the Emergency Medical System (EMS) transferred the girl to a hospital.

For the co-director of the Irídia center, Andrés García Berrio, the use of the Taser against the young woman from Sabadell “shows clear signs of disproportionality” since the images show “a clear superiority” of the agents, who according to the lawyer “could having opted for other less harmful uses of force “both physically and with regard to the girl’s emotional and psychological affectation.

The Mossos have for about two years with more than a hundred electric guns, which they have technically baptized as Energy Conductive Devices (DEC), although they are better known by the name of one of the companies that markets them: Taser.

These are stun weapons that are used both in contact with the body and at a distance of 6 or 7 meters, by throwing darts. The discharge it applies is 50,000 volts of low amperage, with the aim of attacking the neuromuscular system and causing a general collapse for a few moments to the person to whom the shot is directed, which can last up to 5 seconds.

The protocol of the regional police for the use of this type of weapon indicates that it can only be used in situations of “serious rational risk” to the life or physical integrity of the agents or third parties. Before using it, the police officers must also “exhaust all avenues” of dialogue and prior mediation, as well as notify the person who will receive the discharge that the weapon will be used.

In the case of reductions in people, such as the one that occurred in Sabadell, the use of tasers is allowed as long as it is verified that the person who will receive the impact “shows active resistance that puts the physical integrity of the agents at risk”.

The implementation of the Taser in the autonomous police was preceded by the rejection of leftist groups in Parliament such as the CUP or the ‘comuns’ as well as human rights organizations such as Amnesty International or Irídia. Among the reasons for opposing the Tasers, he highlighted the fact that the Mossos allowed their use in situations such as suicide attempts or self-harm or when agents were attacked or threatened with a knife, two cases in which the Committee for the Prevention of The Council of Europe Torture recommends avoiding the use of Tasers as people with mental problems or addictions may be affected.

thus begins the World Economic Forum of “The Great Reset”

the adaptation of Vivaldi’s ‘The Four Seasons’ to climate change