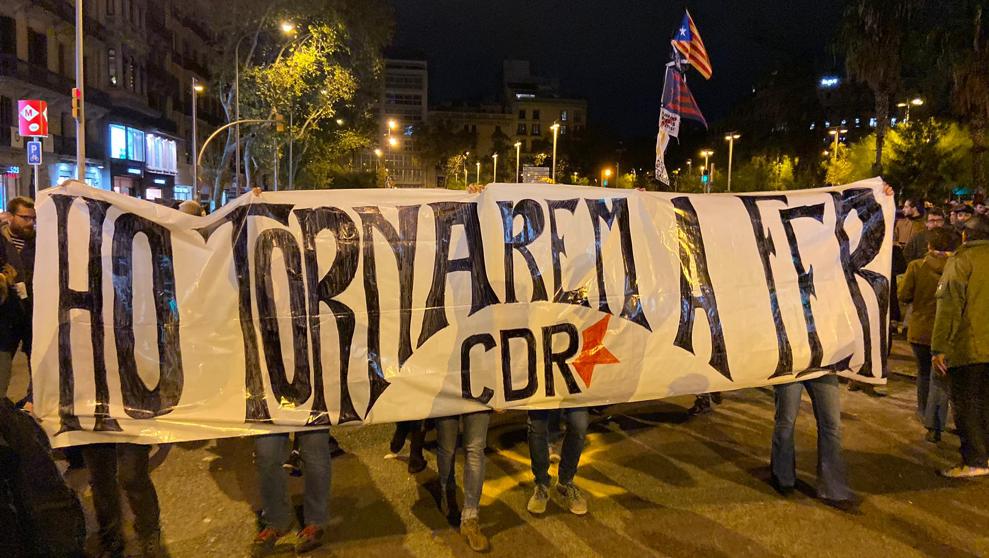 About 500 people called by the so-called Defense Committees of the Republic (CDR) March this Saturday, day of reflection, in the center of Barcelona in protest at the sentences of the you process. Initially they were summoned in the Jardinets de Gràcia, at the crossroads between Diagonal Avenue and the Gràcia promenade, but finally the CDRs have called through social networks to concentrate on Universitat Square, from where the march around the 7:00 p.m.

Under the motto Ho tornarem a fer (“We will do it again”), the protesters have advanced through Pelai Street towards Urquinaona Square and, especially, Via Laietana, the street where the National Police Headquarters is located and where most riots were concentrated from two weeks ago.

However, they have been blocked by two police cords of the Mossos d'Esquadra located in the Sant Pere round and Fontanella street, which has not allowed them to reach their goal. The accesses to Urquinaona Square and Via Laietana are cut and the Police Headquarters absolutely armored and protected by agents of the National Police.

Subsequently, protesters have tried to access the same place on Roger de Llúria Street but also without success. The Mossos follow the protesters to stop them in every attempt. Some of the protesters throw eggs at the agents.

Protesters shout slogans like ‘October 1, neither forget nor forgive’, ‘Freedom political prisoners’ and ‘The streets will always be ours’. The day of protests on this day of reflection has begun with some roadblocks and especially with 300 events convened throughout Catalonia by the Democratic Tsunami.