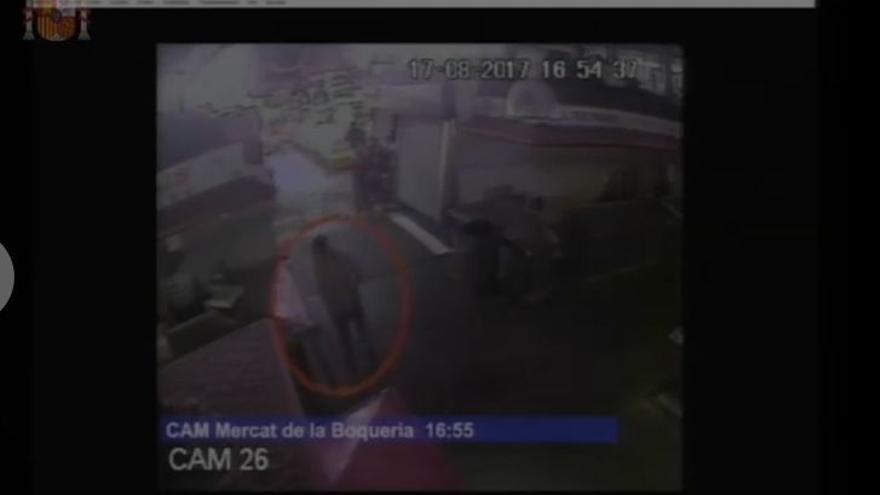 After starting the week with the terrorists’ chalet in Alcanar, this Wednesday’s session of the trial for the attacks in Barcelona and Cambrils has returned to La Rambla. The van with which Younes Abouyaaqoub killed 14 people and his flight through the streets of the city center have taken up the day, in which the testimony of an agent of the Mossos d’Esquadra who crossed paths with him has stood out. young terrorist from Ripoll minutes after the attacks, when everything was confusion and fear around the Rambla. “He had a face of satisfaction and overexcitement,” explained the agent.

The story of this mosso d’esquadra has given voice to the videos that for the first time the court of the National High Court has shown the parties. These are the recordings made by the traffic cameras and from several shops on the Rambla of the run over and the subsequent escape on foot of Abouyaaqoub. Images of the corpse of the terrorist have also been exhibited after being killed five days later by the Mossos. The videos were kept in court because the investigating judge had decided not to disclose them to the parties so as not to offend the victims.

The eyes between Abouyaaqoub and the mosso met in the Gardunya square, next to the Boqueria market, minutes after the attacks. “I saw a man of Arab origin wearing a striped polo shirt,” the agent recalled. As people ran and fled from the scene of the attacks, the policeman recalled, Abouyaaqoub “stopped and looked at the scene with a face of satisfaction and overexcitement.” Then he continued his flight down Carme del Carme.

The work of the Mossos has made it possible to reconstruct the flight of the terrorist. It passed through the courtyard of the CCCB and the Ramon Llull University in the Raval, and continued through the Eixample through Casanova and Gran Via streets. He walked up Calle Entença, past the Modelo prison on his way out of Barcelona. He murdered the young Pau Pérez in the parking lot of the University of Barcelona on Diagonal, stole his car and ran over the police control that had been set up after the attacks at the exits of the Catalan capital.

Then he abandoned tourism in Sant Just Desvern, in the outskirts of Barcelona, ​​and at that moment he disconnected a stolen mobile phone he was carrying. It was 7:00 p.m. in the afternoon, barely two hours after the attacks. The mossos have also testified that they located images of Abouyaaqoub that same afternoon in an industrial estate in Sant Just, but that since then they have lost track of him.

It wasn’t until three days later at 10:30 p.m. that the terrorist was caught on camera at a gas station on the N-340 in Cervelló (Barcelona), about 12 kilometers from the capital, where he arrived walking and with a plastic bag in hand. He was wearing different clothes than on the 17th and he removed a container, probably looking for food, according to the agents, and tried to open the door of a truck. An hour later he reappeared at the same gas station and removed the same container again.

The next day, shortly after 10:00 a.m. In the morning, he was recorded at another gas station on the same N-340, in Sant Cugat Sesgarrigues, near Vilafranca del Penedès, about 12 kilometers from the previous service station. Half an hour later it was recorded in an industrial estate in San Pere Molanta, a kilometer and a half away. Between 11:00 a.m. and 1:00 p.m. He stayed for a while in the Ca l’Escudé farmhouse, in Subirats, about ten kilometers away, and left fingerprints since he would have looked for food.

Finally, the young fugitive was located by a Mossos patrol on a road in Subirats, about three kilometers from the farmhouse, and there he was killed after showing a simulated explosive device. It was 3:00 p.m. The agents who inspected the scene have reported that they found sunglasses and two table knives on the left side of the body, and near it a box of matches and another knife, as well as four plastic tubes, aluminum foil and electrical cables. . A few meters away, near the road, they found half a dozen projectiles and 27 hitting pods.

On the other hand, this Wednesday several agents have declared that they inspected the van of the imam of Ripoll Abdelbaki Es-Satty in Sant Carles de la Ràpita (Montsià), a dozen kilometers from the Alcanar chalet, on August 21. The vehicle was clean and in good condition, and inside they found Es-Satty’s passport, boat tickets to go to Morocco weeks before, pepper spray and a hand-made map of various points around Ripoll.