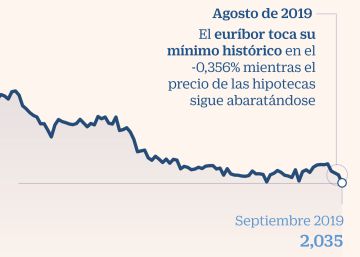 The bank has reinforced its commitment to mortgages in the last year. In an attempt to adjust its accounts in an environment of zero interest rates in which the profitability of its business is increasingly adjusted, the sector has reduced the price of loans for the purchase of a home to levels never seen before , focusing mainly on the fixed rate, with the aim of trying to link the customer through these products. In fact, the European Central Bank (ECB) itself has already alerted Spanish entities of the dangers of this behavior. Andrea Enria, Chairman of the Supervisory Board of the ECB, questioned the profitability of 20-year mortgages, some of them already below 2% APR (equivalent annual rate).

According to the latest data published by the Bank of Spain, referring to the month of September, the average APR applied to new concession loans – fixed rate or variable rate – stood at 2.04%, minimum levels of the historical series Prepared by the institution and dating back to 2003. The price only approached this level in December 2017, when it reached 2.05%.

However, although banks have made a greater commitment to the fixed rate offer in recent months, thus ensuring quotas that allow them to move forward until the 12-year-old Euribor recovers positive levels – currently, according to the Bank of Spain data, is at -0.304%, slightly above the historical lows of last August, when it was placed at -0.356% -, the truth is that the prices of variable mortgages have fallen by greater measure so far this year.

According to the latest data provided by the National Statistics Institute (INE), the APR for the latter was 2.29% in August, representing a 5.37% drop in the first eight months of the year. Meanwhile, the interest applied to fixed-rate loans of new concession in the eighth month of the year was 3.01%, which implies that they would have increased by 1% in 2019 since it closed last year in 2, 98%

The figures differ from the data offered by the Bank of Spain, which instead of the APR refer to the TEDR (effective type restricted definition) equivalent to the APR but without the commissions. Therefore, according to these figures, the interest rate of mortgages at a variable rate, that is, those that are reviewed at one year, was 1.52% in September, and those at a fixed rate – review at more than 10 years – of 2.18%. This would have meant that the former would have fallen 8.6% so far this year while the latter would have fallen 7.15%.

However, regardless of the data used, the reality is that Spanish entities have cut prices of fixed-rate mortgages to a greater extent in recent months. Since the entry into force of the new mortgage law, which foreshadowed an increase in prices – which actually occurred in the months before it became effective -, a war has begun to offer the most economical loans of which the entities They have a hard time picking up. Evo Banco was the last to take a step and place their mortgages at a fixed rate at 30 years and for financing up to 80% of the value of the home below 2% APR. Until now, other entities such as BBVA, Coinc, Openbank and MyInvestor have already included in their offers prices below this threshold, although only for financing below 80% or repayment terms that do not exceed 20 years.

With this price level that, however, is exceeded by some entities, which continue to offer loans at an APR of more than 3%, the interest rates of the variables no longer seem so cheap to the customer. In fact, in some cases they come to match the fixed rate offer. Against this, the certainty offered by the latter, as they guarantee the interest rate throughout the life of the loan while that of the variables is subject to the evolution of the Euribor, customers have begun to opt for the fixed ones. According to the INE, more than 40% of signed loans are already fixed compared to 3% a decade ago.

The fall in mortgage prices is not happening only in Spain. The average APR of the eurozone for revisable mortgages over 10 years ago was 1.44% in September – levels not reached so far -, according to data from the European Central Bank. So far this year, the interest rate has already fallen by 21.7% and all countries in the euro zone, with the exception of Latvia, have registered a drop in the prices of loans for the purchase of a home.

Mortgage prices in Spain are among the highest in the block. The interest charged by the Spanish entities for this type of credits is 2.18%, 55% more expensive than the European ones but also at the lowest levels of the historical series, only touched in October 2016.

France and Germany lead the list of countries with the cheapest loans, with an interest of 1.29% and 1.24%, respectively. However, Slovakia lies ahead, offering an APR of 1.04%.

The euro area’s GDP suffers a record fall of 12.1% in the second quarter of the year