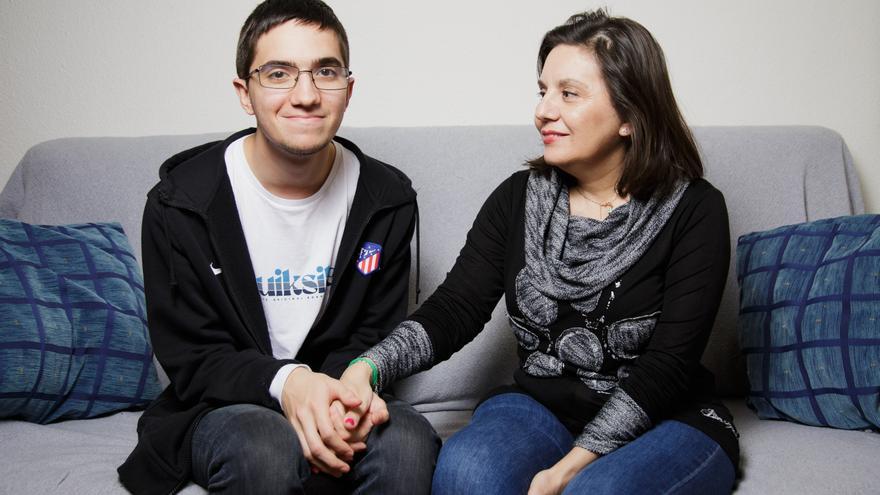 Carmen Rosa Galán has finally begun to relocate the pieces of a puzzle that split her life five years ago. Fourteen years after the birth of her son, the neurologist who treated her epilepsy put her pieces together and told her that the medicine she took to prevent seizures had caused damage to the child. Víctor Varela, who is now 20, is autistic and a ruling has just confirmed that his disorder and that of two other children – born between 2001 and 2007 – is related to exposure in the womb to the drug Depakine, one of the most popular anticonvulsants on the market.

A court of first instance in Madrid has issued a pioneering ruling in Spain that establishes the link between the children's ailments and one of the components of the drug, valproic acid. Despite the fact that there are precedents outside our country, this sentence "is the one that most clearly establishes the fault of the pharmaceutical company Sanofi for not having controlled the distribution of the drug in women of childbearing age," explains the lawyer for the Association of Victims of Syndrome of Valproic Acid, Ignacio Martínez, which brings together those affected.

According to the ruling, Sanofi's way of acting "deprived prescribing doctors and consumers of the possibility of knowing that sodium valproate caused congenital malformations in more than 10% of children, cognitive development problems in 30% or 40 % of these children and a risk of suffering autism spectrum disorders" between three and five times "higher than normal".

"It's a moral victory, of liberation from guilt." Cati Gallardo took Depakine during her first pregnancy. Her son David, now 19, is deaf and autistic. His case is a little different from Galán's. A few days after the child was born, the hospital report already warned of something strange. The doctors included a very extensive list of his physical characteristics, Martínez recalls, and noted that he seemed to respond to fetal valproic acid syndrome. The medical literature links this syndrome with a phenotype, specific facial features (wide nose, wide-set eyes, cleft lip...).

"That's where the sinking came, feeling that I was the one who had failed, that I was stupid, that how could I not suspect that it could happen," says Gallardo on the other end of the phone, who has another completely healthy younger daughter. During that second pregnancy, he stopped treatment. The same scheme is repeated in other families and has served as an argument to try to show the link between the ailments and the drug.

Depakine has been marketed in Spain since the 1980s. In that decade, some studies began to be published linking valproic acid to spina bifida in children whose mothers were taking it. Galán was warned of these risks, although the ailment is easily observable on an ultrasound and the chances, his doctors told them, were small. However, when his son Víctor was born, a study in the United Kingdom with "alarming" data had already been published, credits the sentence: the inadequate cognitive development of children was 10 times greater in the children of mothers exposed to valproic acid . The investigation had already seen the light also when Gallardo became pregnant. David was born in 2003.

"A really diligent action by the pharmaceutical company should have been [...] in stopping the distribution of the product for pregnant women or those who intended to be pregnant and communicating such data immediately to the health authorities, later assuming the cost of commissioning a large retrospective study in the different countries in which the drug was marketed, after obtaining of the corresponding authorizations from such authorities". However, the judgment continues, "the pharmaceutical company Sanofi chose to continue its commercialization, without immediately communicating such studies to the health authority (no evidence has been provided in this regard); thus choosing the maintenance of its benefits over the health security of patients and their descendants".

Sanofi appeals to "the complexity of medical care for women who suffer from epilepsy and wish to become pregnant" and considers that the sentence "does not take into account the evolution of scientific knowledge" and "the regulations applicable at the time, which required the prior agreement with the health authorities for any modification of the informative documents related to a drug", according to a written response from a company spokesperson. The pharmaceutical is supported by the fact that the authorities consider that the information in the prospectus was always adjusted to the knowledge at all times.

The package insert for Depakine, which is still marketed for the treatment of epilepsy and also manic episodes of bipolar disorder, included the following in 2015: it should not be used in girls, adolescent women, women of childbearing potential or pregnant women Unless alternative treatments are not effective or tolerated because the teratogenic potential and the risk of developing developmental disorders in children exposed to valproate in utero are high.

The The first alert from the Spanish Agency for Medicines and Health Products (AEMPS) was in 2014; the second, in 2018. "That there have not been alerts before does not mean that the pharmacovigilance work has not been done," defends a spokesman for the agency in conversation with elDiario.es, which ensures that the first changes in the prospectus and in the technical sheet date from the nineties. The AEMPS admits, however, that the alerts could have been issued before, "but it was done as data appeared," the same spokesman emphasizes. To have a complete picture of such a complex case, we must also consider that a few years ago Depakine had almost no therapeutic alternatives, recalls the AEMPS, and that epilepsy is a serious disorder that can be fatal if left untreated.

There is no data on how many creatures may have suffered damage related to Depakine. In the Association of Victims of Valproic Acid Syndrome they have collected about 200 cases, according to Galán, who serves as president. "90% are women with epilepsy, although it also occurs for bipolar disorder. There are not many cases because there are many families that will not have made that connection," explains Galán. Lawyer Ignacio Martínez speaks of several thousand affected and draws a parallel with France, where its use has been similar and more than 3,000 cases have been registered.

Behind the difficulties to get them afloat in Spain there are two issues, according to the families. One, how difficult it is for mothers to face the feeling of guilt. "In these painful situations, you can choose to cover it up and forget it," Martínez assumes. The other difficulty is associated with the complication of having a clear diagnosis. The manifestations of this syndrome are multiple and varied. "The diagnosis is made by ruling out, there is no test that tells you yes or no," adds the lawyer.

For families, the health system is not being able to see the origin of these cases. Those who come to the association are informed that there is a doctor at the Virgen de la Arrixaca hospital in Murcia, Juan José Ortega, who is establishing the relationship between the drug and malformations and autism spectrum disorder. "We have to ask the neurologist to transfer us there and there are doctors who tell us no. We depend on goodwill. Andalusia, Valencia and Madrid make it difficult, for example. The Basque Country refers all patients there when there are suspicion and also Catalonia", says the president, Carmen Rosa Galán.

The ruling is not final and, in fact, will be appealed by both parties. The sentence issued by the Court of First Instance number 91 of Madrid sets compensation of 730,000 and 864,000 euros for the families of Galán and Gallardo, somewhat less than what was requested. The amount that corresponds to the third adolescent is not closed and the demand of a fourth family has not been attended by the judge. To these amounts must be added approximately 50% for interest that must be paid by the insurer Allianz. The association advances that, once the precedent is established, there will be more demands.