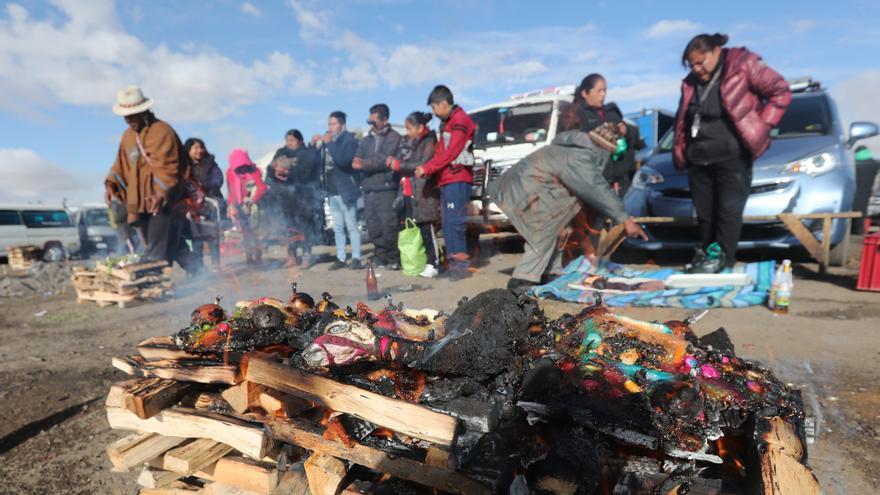 El Alto (Bolivia), Aug 1 (EFE) .- Bolivians from rural areas and some cities began this Sunday the month dedicated to “Pachamama” or Mother Earth with ancestral rituals and offerings to thank for the goods achieved in the last year and ask for renewed prosperity.

August is the month chosen for the offerings because the first agricultural season in the Andean world concludes and, according to the indigenous communities, at this time of the year Mother Earth “opens her mouth” to feed herself with offerings that reward the fruits given and those that will give in the future.

Some offerings are delivered in homes and businesses, but there are also those who offer them at sites considered sacred to indigenous people, such as the Waraco Apacheta, located on the outskirts of El Alto, the neighboring city of La Paz, a trip that takes little more. one hour by car.

Dozens of people came to the place at dawn with the intention of thanking for what they received and making new requests to the Andean deities.

In the place, several “amautas” or indigenous wise men were waiting to perform the rituals that are prayed in Aymara and Spanish alike, making conch shells thunder and chanting “jallalla” or live in Aymara.

One of the amautas is Mariano Condori, or Mariano de los Andes, who explained to Efe that since time immemorial it is known that in August the earth “opens the mouth” and it is the right moment to thank him.

“When they do the sowing in the field, the plowing is done, the land is broken and the toads appear. That is called ‘marani’ and all that we venerate. ‘Marani’ are those that give fertility to the land and also the blessing to each man or woman who offers a table, “said Condori.

In August, the “Pachamama” receives “with love and will” what is offered to her, so there is an ancient tradition of making these offerings “to give her spirit and courage,” the “amauta” and spiritual guide explained to Efe. Victor Mamani.

“We are thanking mother nature (and we ask her) that all these diseases go away,” added Mamani.

The main thing in an offering is the so-called “table” with sweets of different shapes and the “mysteries”, small tables of sugar with various images in which it is believed that the fate of whoever makes the offering comes out.

They also include wira k’oa, a sacred medicinal plant that grows in the Altiplano, incense, copal or aromatic vegetable resins, and llama fat.

Some offerings carry “sullus” or stuffed llama fetuses, others include various fruits.

On a piece of paper, first the wira k’oa is placed surrounded by colored wool, then the sweets, incense, llama fat, some coca leaves and the “sullu” are arranged.

When the offering is already assembled, it must be “ch’allar” or blessed with alcohol, wine or beer, and then placed on a pyre.

The items offered must be reduced to ashes which, once cooled, are buried or stored in a box.

The Waraco Apacheta is a special place because it has “illa” or power and that is why people go there with faith to ask for good health, a house, a car or prosperity, Condori said.

But it is not the only place where offerings are given, as there is also the site known as La Cumbre on the way to the subtropical zone of the Yungas, and the Pajchiri and Lloco Lloco hills in the La Paz Altiplano.

The important thing is to make the offering with faith and believe that what is being asked will be received, concluded Condori.