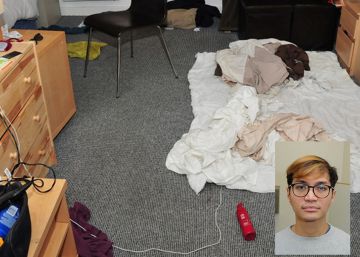 The case of the biggest rapist in series in the history of the United Kingdom does not have its end point in the life sentence of Reynhard Sinaga, pronounced earlier this week by a Manchester court. Other potential victims of the “more prolific” sex offender that is recorded in British lands continue to go to the police since a sentence was issued that will imprison this 36-year-old Indonesian student in prison for at least three decades.

The seemingly innocent images that Sinaga had been hanging on himself in social networks since he arrived at the Manchester University for postgraduate studies - now reproduced in all media in the United Kingdom - they hid the other face of a sexual predator. He was looking for his victims in the immediate vicinity of the nightclubs of this city in the north-west of England, disoriented young people after the spree by the effect of alcohol or drugs, and before whom he presented himself as a good Samaritan. He took them to a nearby floor, sedated them - probably with the potent GHB drug - violated them and filmed the sequence of the attacks on his cell phone. In some cases, that sequence went on for eight hours.

The orchestration of the plan was disrupted when one of the victims - aged 18 - who regained consciousness in the middle of the rape, managed to escape, taking with him the phone number of the attacker. Subsequent police inquiries found two and a half hundreds of illustrative videos of a endless brutal sexual assaults. Many of the victims did not know that they had been subjected to such sexual attacks until the agents showed them the images.

"How could I be so stupid and end up, on leaving the club, on the floor of a stranger?" One of the victims cried during the trial. There he was subjected to all kinds of harassment he suspected but never told anyone until, on Christmas Day 2018, he attempted suicide and ended up in a hospital.

His case is similar to that of many other men who one day dawned on a strange floor, confused and even ashamed of what they already sensed had happened but still obfuscated by the effect of the drug they had been given. Many ended up falling into depression ..

The judge of Manchester was taxative when pronouncing his sentence last Monday and describing Sinaga as a "monster" for "the scale and magnitude of crimes that confirm it." Judge Suzanne Goddard considered her at least 159 sexual assaults proven against 48 men. The police investigations indicate that there were many more and the numerous calls received this week from alleged new victims would confirm that end. The police command has not yet specified specific figures, although body sources cited by the British press estimate that up to 190 men (of whom 70 have not yet been identified) would have fallen into Reynhard Sinaga's networks.

The news of his arrest and subsequent conviction has caused disbelief and stupor on the Indonesian island of Sumatra from which this son comes from a Christian and very conservative family. The patriarch, Saibun Sinaga, has agreed to speak with the BBC service in Indonesia to underline: “We accept the verdict [de la justicia británica] because that punishment fits the crimes of my son. But I feel unable to add anything else about the case… ”

Other members of the Sinaga family and friends of Reynhard at the University of Indonesia - which, given the circumstances, have required anonymity to the BBC - describe him as a very popular student and an extravagant point that enjoyed social relations and showed himself as an easy partner to work with in course projects.

They all lost contact with Reynhard when he decided to continue his studies and postgraduate studies in the United Kingdom in 2007. The only thing they knew about him since then is that he had fallen in love with the city of Manchester and had told his family he wanted Stay to live in the UK forever.

That dream was made possible by the excellent financial position of the father, a businessman who owns several headquarters of a private bank, and who agreed to finance his son's international studies over more than a decade. And also pay for the apartment he enjoyed on Princess Street, in the heart of Manchester. An idyllic existence until the arrest of Reynhard by the British police, on June 2, 2017.

On the same floor, near the area known as Gay Village, the young Indonesian perpetrated his crimes. What then happened has been the subject of a summary that, despite the firm conviction of the rapist, has still left many fringes loose. Those of the names of other young people who were victims of a studied ploy of the perpetrator, focused on vulnerable people or who, after a night of partying, were lost and without a pound to even take a taxi.

Sinaga's mother was present only in the early stages of her son's process. The father felt unable to face the serious charges against Reynhard. Neither of them attended the session in which the defendant pleaded not guilty and insisted that all relations he had with so many men were consensual. The videos exposed throughout the case - and filmed by the perpetrator himself - indicate the opposite. In applying the long arm of the law, Judge Goddard wanted to have a gesture toward those parents rather than desolate. The "monster" family, he said, did not know at all "the true nature" of that son.