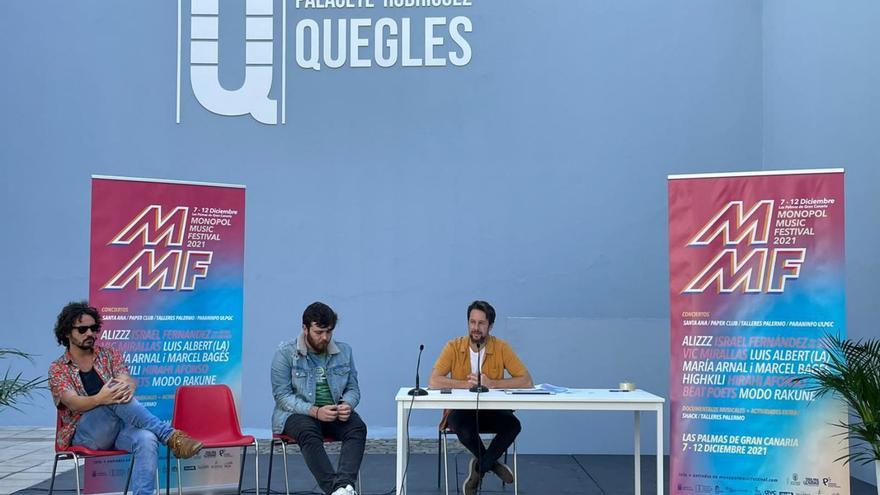 The Monopol Music Festival (MMF), the event that weaves together live avant-garde music and musical documentary film, celebrates its eighth edition from December 7 to 12, with a line-up that includes eight concerts and DJ sessions, seven screenings and a poetic-musical recital that is divided into five cultural spaces in the heart of the city.

At its usual locations in Plaza Santa Ana, The Paper Club and Shack Bar, the MMF universe presents a new musical branch in the Auditorium of the University of Las Palmas de Gran Canaria (ULPGC) and incorporates Talleres Palermo as a film exhibition space before the temporary closure of the Monopol cinemas that lend it its name, in addition to being in the framework of its opening party with a musical triplet next Tuesday.

In the musical section, the Catalan musician and producer Alizzz, winner of three Latin Grammys for his production work in El madrileño, by C. Tangana, both sound architects of the new Spanish pop, heads the poster for this new edition, in which The Barcelona duo Maria Arnal and Marcel Bagés also parade, presenting their new album, Clamor; Vic Mirallas, Alejandro Sanz’s ex-musician, in his own way among the new urban music; the cantaor Israel Fernández, also with a new album under his arm, Amor, together with Diego del Morao; LA, Luis Albert Segura’s musical project, launched by Evergreen Oak; and as a local representation, Modo Rakune, the acclaimed band led by Jorge Brito; timplist Hirahi Afonso and his debut album, Memento; and acclaimed Denomination of Origin DJs Highkili and Woodhands.

The programming line of this film-musical event, already consolidated in the island’s cultural agenda, is based, in the words of Víctor Ordóñez, director of the MMF, “on a commitment to avant-garde music and that, for us, he is about to say something new”. “Every year we try to bring in groups that are in a relevant moment of their careers and, as far as possible, with recent works, that are risky bets and different from what we see in the circuits of other festivals,” he said yesterday during the presentation of this edition, accompanied by the musicians Hirahi Afonso and Jorge Brito. “For the size of this MMF, the poster of artists that we have is a source of pride”, he pointed out, in relation to the last two editions marked by the health situation and budgetary limitations, but which this year is gradually recovering “the pulse and the original spirit of the festival ”, with concerts in different referential spaces of the city.

For its part, the documentary section reduces its format in Talleres Palermo, “but without any technical loss”, with the accent “that there is a representation of national documentaries and that, above all, they are not in circuits of mainstream platforms”, he highlighted director. The selection discovers the titles A Symphony of Noise. Matthew Herbert’s Revolution, a sensory and humorous journey around Matthew Herbert; Nueve Sevillas, which portrays the symbiosis between Seville and flamenco; Fanny: The Right to Rock, which gravitates on the universe of the Filipino-American sisters Jean and June Millington; St. Vincent: Nowhere Inn, a meta-documentary in the key of a psychological thriller; We are nothing – La Polla Records, about the legendary punk band; Crock of Gold: Drinking with Shane MacGowan, a portrait of the Irish composer under the gaze of Julien Temple; and Billie, about the crossroads between jazz diva Billie Holiday and journalist Linda Kuehl.

In addition, the MMF opens its artistic spectrum with a new path towards poetry through music sheltered by the recital Tropieza luz, by the poets and musicians Pablo Medel and Arturo Martí, who pay tribute to beat poetry.