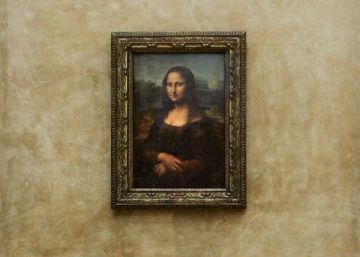 The Louvre will move the Mona Lisa to another floor of the museum until the renovation of the State Hall, where Leonardo da Vinci's masterpiece is shown. The canvas will be displayed, from July 17 and until mid-October, in the Médicis gallery, together with paintings by Rubens and other masters of the Flemish school. This temporary move responds to the need to adapt the room to safety standards and also to increase the flow of entries and exits, as part of a plan promoted since 2014 by the director general of the museum, Jean-Luc Martinez. Since then, the center has invested nearly 60 million euros in improving access and reducing queues.

Even so, the transfer of Da Vinci's work did not fit into the plans of the Louvre. A spokeswoman for the museum explained yesterday that the initial idea was to maintain the Gioconda in the State room until the works were completed, but he changed his mind after a protest by his security agents in May, which ended up causing a 24-hour closure. The workers of the art gallery complained about the uncontrollable flow of visits to the Louvre, that in 2018 beat its own record by hosting 10.2 million people, which represents an increase of 25% over the previous year. The situation had worsened since January, when the renovation work began in the States' hall, which forced the placing of scaffolding and the closing of one of its two access points, which made circulation even more difficult.

Before the workers' complaints, the museum launched this plan b. "The policy of the Louvre is to keep the works visible as long as possible, but 70% of the visitors come to the museum with the intention of seeing the Mona Lisa, what caused a bottleneck, "acknowledged a spokeswoman for the Louvre yesterday.Time transfer was imposed as the best solution to ensure" the quality of visits and the work of security agents, "added the same source.
The Mona Lisa It will be taken off on July 16 and will appear in the Médicis gallery, on the first floor of the museum, the next day. It is the third time that the work changes its location in the Louvre. Between 1992 and 1995, it was exhibited in the Grand Gallery for museographic reasons and, from 2001 to 2005, it was moved to the Rosa room during a previous renovation of its current location. The painting, of fragile state, is forbidden to leave the museum.

The last time it was shown outside Paris was in 1974, when the work visited Moscow and Tokyo by decision of the Elysee and against the opinion of the conservators of the museum. In 2018, the ex-Minister of Culture Françoise Nyssen proposed circulating the Gioconda for the French territory, but he gave up his plans in the face of the furious reaction of the art world. The painting is painted on a slightly curved poplar wood plank and has a non-restorable crack on its back.

The Mona Lisa It will not be part of the exhibition that the Louvre is preparing to celebrate the 500th anniversary of the death of Da Vinci, which will open on October 24. "We can not deprive 15,000 visitors a day to see the Gioconda ", argued Martinez.