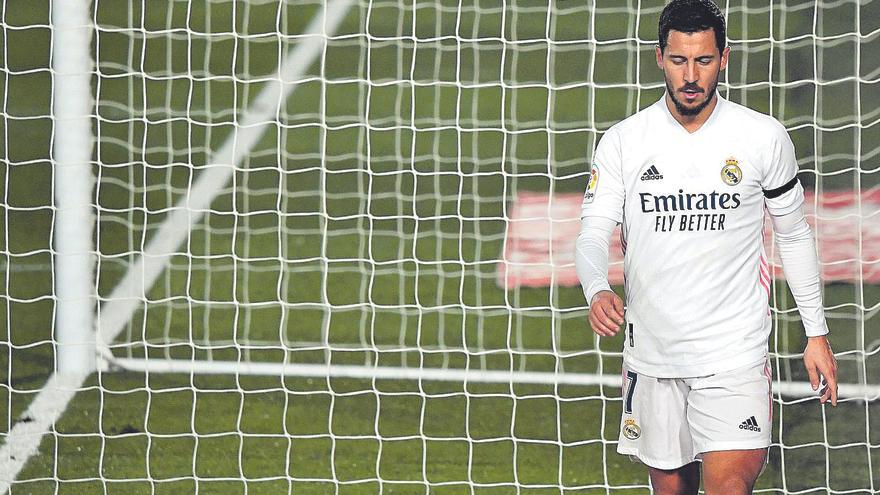 The second unit of the Real Madrid, headed by Eden Hazard In a new attempt to return to his level, he must keep Zinedine Zidane's team in the fight for the league title against a Osasuna without stress, at the gates of the return of the semifinals of the Champions League against Chelsea.

There is no physique for everything. The holders of Real Madrid reach the limit at the moment in which the two big titles are decided and Zidane must make decisions. He saw it clearly against Chelsea, with his equipment rolled from the physique and performing a resistance exercise to sign a tie that leaves the tie open for London. Rotations are required.

Wednesday's appointment for a place in the final in Istanbul conditions the league duel against Osasuna. It will be the moment to show up for those footballers of the white team who have secondary roles, for homegrown players and for others who return from injury in need of competition rhythm. Together they face the obligation to win to continue to aspire to the title garter belt.

In the first group appear names like Álvaro Odriozola, Marcelo, Isco Alarcón or Rodrygo; in the second, Antonio Blanco and Sergio Arribas; in the last one, Eden Hazard. This, after his progressive and calm return, is ready to make the leap to ownership.

Zidane will revolutionize his eleven. Militao, who has played everything recently at a high level, Nacho Fernández, an emergency solution for the right-back in London, midfielders Casemiro, Toni Kroos or Luka Modric, and the Brazilian Vinicius cry out for a pause before the big battle. They will not all be able to rest due to the lack of troops in a week left by the umpteenth relapse of Dani Carvajal. He joins the casualties of Lucas Vázquez, Ferland Mendy and Fede Valverde.

The racha of 18 games without losing has entered a dynamic that would not serve Real Madrid to win Titles. Only one win in their last five games. In the league, two draws in three games have taken away the possibility of settling in first place and remains two points behind an Atlético de Madrid that has been losing strength. With defensive security, without conceding a bit in the competition since the classic against Barcelona, ​​a total of 300 minutes, but with a goal foul that he must correct against Osasuna. Unable to score against Getafe and Betis.

Osasuna visits Alfredo Di Stéfano with the difficult mission of winning again after his last defeat, against Celta, which cut a streak of three consecutive wins and six games without losing that allowed him to give a leap into tranquility, fleeing the burdens of the fight for salvation. Their coach, Jagoba Arrasate, pointed out that they will have to have a "perfect" match to knock down a Real Madrid that is at stake a lot. "The team wants to show that we are capable of competing against the best," he said.

The Navarrese set is not mathematically saved, so the Basque coach will take out all his artillery to try to make Zidane's night bitter. His great month of April has served to install calm and confidence in Tajonar. Despite having the virtual permanence in their pocket, the men of Arrasate will seek to give a new joy to their fans against an important team. Away from the title contenders, in the absence of visiting the Metropolitan, he was thrashed by Barcelona (4-0) and fell to Sevilla (1-0).

Aridane and David García will return to ownership after their substitution against Celta and they will be accompanied by Lucas Torró from the front. The one from Cocentaina was trained at La Fábrica, which is why he will try to prove his worth in what was his home.

Osasuna has not beaten Real Madrid at home since April 2004, a fact that he will seek to make obsolete in a season marked by injuries for both teams.

The key: the level of the second Real Madrid unit to respond to the pressure without margin of error.

The data: Osasuna has not beaten Real Madrid at home since 2004 and has been unable to overcome the white team in their last eleven light matches since 2011.

Zidane: "The important thing is that those who are prepared to compete play"

Sweep yourself: "We are able to compete against the best"

The environment: the match comes in the middle of the Champions League semifinal tie, with the danger for Madridistas of diverting attention to the European event that awaits them in London.