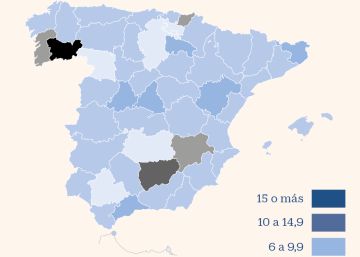 The residential sector It is moving towards a phase of moderation of prices after about four years of strong rebounds to those who have not followed in equal measure wages, which has reduced accessibility to a market that is especially stressed in large cities. But this slowdown will not be homogeneous, but will occur to a greater extent in the sale of living place Than in the rent. This is despite the fact that the price of leases has exceeded nationally the maximums reached during the real estate bubble, something that has not yet been registered in the segment of the property, and that, in general, for rent, people with less income, which exacerbates the problem of access to housing.

The year 2019 closed with the average price of more expensive rent, above the real estate boom. Specifically, last December the leases reached 10.18 euros per square meter, thus exceeding the historical maximum recorded in May 2007 (10.12 euros), according to a recent study published by the real estate portal Fotocasa based on prices of offer. Specific, almost half of the autonomous communities It has exceeded the bubble levels: Basque Country, Catalonia, Madrid, Balearic Islands, Canary Islands and Castilla y León, details the director of Studies and Training of the portal, Ismael Kardoudi.

The situation in housing in propertyOn the other hand, it is quite different. According to data from the same portal, sales prices closed last month last year with a slight year-on-year fall of 1.3%, the first after more than three years of uninterrupted increases. And although the recovery of the sector has been very different depending on the territory, the average sale price at the national level is 38% below the highest levels registered in the boom, at 1,846 euros per square meter. Only the Balearic Islands are currently at highs, explains Kardoudi.

For this year, this trend is expected to continue. According to the forecasts made for this newspaper by the data analysis company urbanData Analytics (uDA), the rents they will continue to become more expensive throughout the national territory, except for three provinces, while in the case of housing in property, prices are expected to fall or stagnate in eleven of them. In fact, according to these estimates, leases will continue to cost almost twice as much as homes for sale: 5.1% on average, compared with 2.9%.

Specifically, the uDA prediction model, based on four million weekly data that drink from a quarantine public and private sources, calculates that leases will only depreciate very slightly in Valladolid (-0.4%) and in Cáceres (-0.2%), while they will stagnate in Soria (0.1%). Regions, all of them, with a low dynamic residential market due to low demand. On the other hand, he estimates that the sale prices will contract this year in five provinces – Ourense, Jaén, Albacete, Pontevedra and Guipúzcoa – while another six would register unremarkable increases below 1% – Alava, Melilla, Ciudad Real, Burgos, Seville and Zamora–.

The inability of many citizens to access a property home due to the tightening of the conditions to qualify for a mortgage as well as the inability to save to enter a flat has made the demand for rental housing rebound strongly in In recent years, compared to an insufficient rental housing offer, Kardoudi recalls. A trend that will continue to deepen as long as the rents continue to become more expensive than the houses in property and eating the savings of the potential buyers of housing.