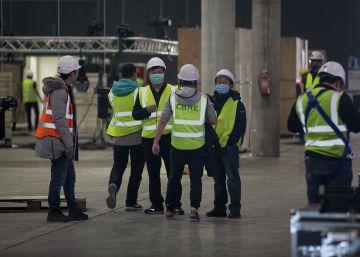 The economic losses due to Mobile World Congress suspension They are already millionaires, but who will compensate the injured? The consultants, lawyers of the State and lawyers consulted by THE COUNTRY agree that the key will be to determine if the cancellation of the fair - agreed on Wednesday by the organizer - is due or not to a cause of “force majeure”: the outbreak of coronavirus. In that case, they add, it is possible that, in court, GSMA can circumvent or at least minimize the payment of high compensation.

The organization said yesterday that it renounces to organize the Mobile by the "Global concern" with the coronavirus. It is true that the World Health Organization (WHO) has decreed the international emergency for the virus. However, the agency has advised against restrictions on the movement of people and goods outside of China. In Spain, in addition, no exceptional measures have been taken since there are only two cases (imported) and no contagion has occurred in the territory. The Minister of Health, Salvador Illa, reiterated on Wednesday that there is no public health reason to cancel the celebration of any event in Spain.

“Spain's position on the virus can influence the courts. Also important is the positioning of the WHO so that the organization can benefit from force majeure, ”explains Víctor Mercedes, partner responsible for procedural law at Baker Mckenzie. The Civil Code exempts from liability for damages in fortuitous cases (events that are beyond the reach of the organizers, such as a popular revolt or a war) or due to force majeure (earthquakes, fires, etc.).

Faced with possible claims - which are in multiple directions: from companies to the organization, from hotels to companies that have canceled their reservations - those affected can always use that reason in court, Mercedes adds. There are similar precedents, although not equal. In 2013, the Audiencia of Madrid exonerated a cruise company that decided not to disembark the travelers in all the cities planned on the route contracted by the expansion of influenza A. “The court concluded that, as the WHO had described it as Global pandemic, there was no responsibility. In the case of Mobile, we will have to see if the same applies to the coronavirus, ”he concludes.

“Whatever the public authorities say, the opportunity to defend yourself in court is there. It can also be considered the other way around: the organizer wants to avoid greater responsibilities in case of contagion, ”says a consultant who prefers not to reveal his name. Everything also depends on the specific clauses in the contracts signed between the parties. And if they fall within the Spanish jurisdiction or, as is often the case in these cases, to an international arbitral tribunal.

The diagnosis includes Borja Adsuara, consultant, lawyer and former CEO of Red.es. “Everyone loses with this matter, and the legal solution is very complex. There are the causes of force majeure, but also many types of contracts, each with its total, partial or zero return policy. There is also the fact that, if the essential conditions are changed, the termination of the contract can be requested, ”he points out in reference to the absence announced - before cancellation - by large companies in the sector.

Those companies that left the ship before, experts agree, have it much harder to claim compensation. A different case is that of the firms that still intended to attend the meeting. There you can start a cascade of claims that would have the last link insurance companies.

But insurances always accept a multitude of exclusions, experts agree, and often mention causes of force majeure. In one of the policies related to Mobile, says one of the lawyers, explicitly refers to the possibility of an epidemic being unleashed. The companies affected, in any case, have already ordered large international firms to report their room for maneuver. It is the case of some hotel chains. The consultants warn of the need for a more or less agreed solution. "The opposite leads to judicial chaos that may end up affecting the continuity of Mobile in Barcelona."

Rain of millions. The Mobile World Congress (MWC) leaves Barcelona every year, according to the calculations of the organizers, about 492 million euros in hotels, restaurants, taxi drivers, transport companies, hostess agencies ...

Employment and companies. The largest technology fair in the world last year brought together 108,000 attendees and generated 13,000 temporary jobs. The last edition was attended by 2,400 companies.

Blow to the Fira. One of the most expensive chapters is the rental of space at the fairgrounds, where a square meter of exhibitor costs about 1,200 euros. The rental of spaces costs a total of 150 million euros. Only Ericsson and Facebook, two of the big ones that left, had reserved between the two 7,200 square meters. The MWC represents 30% of the turnover of Fira de Barcelona, ​​the entity with which the employer GSMA contracts the space and logistics.

Tickets and grants. The cancellation will be a blow to the income from entrances of attendees, ranging from 799 to 4,999 euros. Public subsidies will also be lost. The Ministry of Economy contributes each edition five million euros to fund lost.