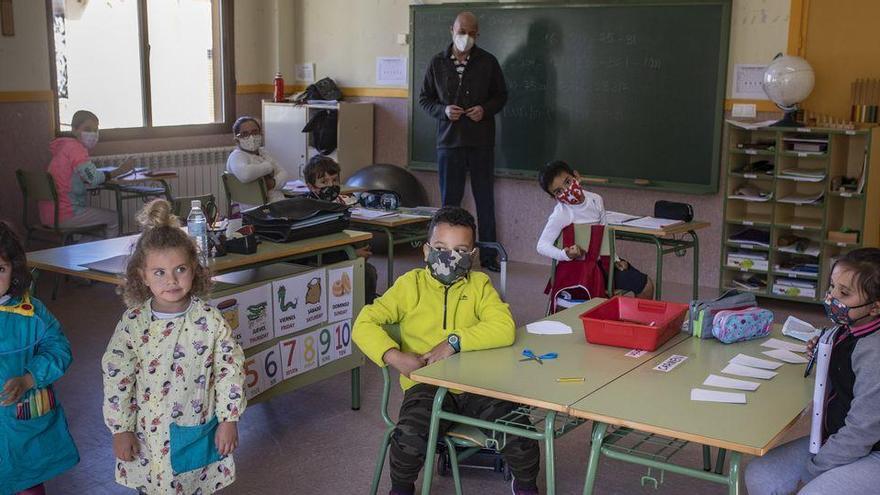 In the depopulated Zamora, when a school closes, it generally does not reopen. Putting the lock on the classroom is usually the consequence of a process of flight of the young population in search of a more prosperous future; the symbol of a decline that threatens the very survival of the place. For almost all the localities that have to go through this trance, the scenario is irreversible, hence the achievement of Arrabalde can be considered as a small miracle for a place that takes in air while the big cities drown in the middle of the pandemic.

This town, located almost in the border of Zamora with León, more than an hour away from each capital, the school reopened in September, after four years of forced closure due to the lack of children. The return of some parents tired of life far from the place they call home, the birth of two girls or the decision of the local doctor to change their children, opened the doors of the school in a place that returns to smile hand in hand with childish gibberish.

The mayor, Felipe Martín, is one of the protagonists of this story. His interest in recruiting parents for this common cause was accompanied by the personal component of having a school-age daughter, Cloe: "Last year we took him to the nursery in Benavente, but he cried and always told us that he wanted to come to His family comes from the area, but he was born in Madrid and lived in Fuenlabrada for more than 25 years. More than a decade ago, he lost his job, he returned to the village for two weeks and ended up finding his partner. She no longer left.

Since then, his life changed radically. "I even stopped having the migraines that I suffered in Madrid", assures the mayor, in front of the renovated school, on a first Friday in October that is accompanied by a cold that gets into the body. Felipe Martín observes the center, where the children are about to go out for recess, and then turns to the area of ​​the castro de Las Labradas, one of the resources that he wants to exploit to attract tourism to the area and try to energize a territory " with many possibilities ".

Oblivious to adult issues, the eight boys and girls who share the Arrabalde classroom go out to spread out around their new school. For some of them, this is a return. In 2016, without classmates to reach the minimum ratio of students, they had to take the road to Morales del Rey, twelve kilometers away, in a school bus that no one longs for, as Sofía, one of the little girls, warns.

Nor does it seem that Aaron misses his school in Móstoles too much. This Friday, the little one joined the school in Arrabalde after his parents chose to turn his life around and change the outskirts of Madrid for Benavente, where they will install a business. The child thus leaves a crowded center behind to make contact with a family-sized rural classroom. Here, there are six recess football matches on a court that, far from causing collisions, encourages the little ones to get tired from one place to another.

Raúl is one of Aarón's ball companions. For him, the return to Arrabalde also implies an important change, although he comes from another place without stress, such as Medina del Campo. His parents, Gustavo and Teresa, had been mulling over the idea of ​​returning to town for some time, and the pandemic gave them the boost they needed. Now they confess "delighted" with this stage and with the possibility of educating their children in such a close environment.

Another mother who is satisfied with the situation is Marta, the doctor at the local clinic. Every day, this health professional travels from her home, in a nearby town in the province of León, to meet the needs of the citizens of Arrabalde and other surrounding towns. Since September, Carmen and Rodrigo have been riding with her in the car: "For me it is comfortable," says the health company, which recognizes the advantage for their children to leave a center they shared with 200 other children. The virus claims tight environments.

However, this familiarity does not imply that children ignore health security measures. In fact, in the classroom and on the street, everyone maintains their mask with a surprising naturalness and discipline for their age. The only ones who leave their faces in the air are Elena and Chloe, the two girls from Early Childhood Education, who share games with the advantage of being able to have fun without having to cover their noses and mouths.

Between them two and Claudia, the oldest in the school, they are eight years apart. The girl who will go to the institute in September lives in the same space with two girls who were not born when she had to suffer the closure of the school in 2016. Now, the parents' ambition is that the school resista, at least, until all current students complete the Primary cycle.

This is what they express while waiting for the children to leave school. Inside the campus, the responsibility falls on Vicente, a teacher who, like Claudia, closed and reopened the school. "I cried a lot in his day", recognizes this Asturian who arrived in the province at the age of 14 and has been living in Arrabalde for decades. When this classroom was closed, its destiny remained in Morales de Rey; The moment he could, already at the beginning of this course, he asked to return.

"For us it is fantastic that the teacher is Vicente", explains the mayor, Felipe Martín, aware of the advantages of having a man who knows the families and who has roots in the area. The teacher also recognizes the positive part of teaching the children around him, although he emphasizes that not everything is pink: "Notice that I have to give several courses at the same time, because the students are of different ages ", remarks the teacher, who offers the feeling of having well-trained patience.

The teacher's idea is also to give continuity to this educational project, and everything indicates that this will be the case, at least in the medium term. The minimum ratio set by the Board is three students, so the margin is large, despite the imminent departure to the institute of one of the girls. The rest are still old enough to continue from the next year in a school whose case has had a significant media coverage: "We are going to start charging," jokes the teacher.

Meanwhile, the rest of the inhabitants of Arrabalde celebrate the moment: "Many times there is an audience at recess," says the mayor. Of course, the news is for celebration in a place that has just 216 inhabitants and has lost half its population in the last 25 years. That demographic comeback still looks difficult, but the first step has been taken from below. The quarry is returning to form at home.