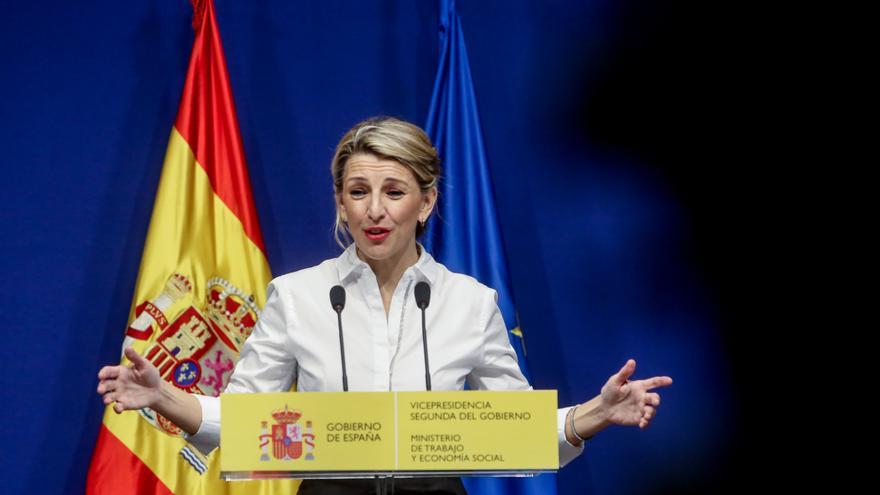 The minimum wage in Spain will soon reach 1,000 euros per month. The Government will promptly approve an increase in the SMI of 35 euros per month, from the 965 euros that currently exist up to 1,000 euros per month in 14 payments, 14,000 euros gross per year, as announced by the second vice president and Minister of Labor, Yolanda Diaz. The measure, which has been agreed with the majority unions and has the rejection of the employers, will have retroactive effect from January 1.

This new increase in the lowest wages, of 3.6% compared to last year's level, is added to those approved in recent years by the governments of Pedro Sánchez, of more than 30%. When he came to power, in 2018, the SMI was located at 736 euros per month. Four years later, this 2022 reaches the barrier of 1,000 euros.

Vice President Yolanda Díaz has appeared before the media with the leaders of the CCOO, Unai Sordo, and the UGT, Pepe Álvarez, to report on the increase. The three have signed the agreement before the journalists, after the meeting held this morning. "The Government of Spain and the social agents comply", stressed Díaz, who thanked the unions for agreeing to the measure.

The head of Labor has denied the criticism, incited again today by the PP, that the increase in the SMI destroys employment. "It's science fiction," replied Díaz, who recalled the employment records that Spain is registering despite the large increase in the minimum wage in recent years. Also in sectors such as agriculture, which is one of those that is most impacted by the measure and that is complaining the most.

The increase will directly reach "more than 1.8 million workers," stressed the leader of the CCOO, Unai Sordo, according to the study carried out by the union's economic cabinet. Of these, women and young people stand out, he explained, with almost a third of working people between 16 and 24 years of age who will benefit from the increase.

Reaching 1,000 euros is a victory in euros, practical for the affected people who will notice it on their payroll, but also "symbolic", Pepe Álvarez stressed. "It means breaking a ceiling that was difficult to break," said the general secretary of the UGT, who recalled that the employers committed in 2018 to a minimum wage in the agreements of 1,000 euros "and has not complied". Now, the measure will be mandatory for all workers, with or without an agreement.

Agreement only of the Government and unions

The Government has closed this morning the negotiation on the SMI for 2022, after communicating on Monday his proposal for a rise to 1,000 euroswhich included the CCOO and UGT claim in recent months, and that yesterday the businessmen announced their unanimous rejection after an internal consultation. This Wednesday's meeting sought to confirm positions: the expected pick-up of the employers' associations and to check if the unions supported the Government's proposal. In recent days they had started to claim an increase "at least" up to a thousand euros, so the CCOO and UGT wanted to try a somewhat higher increase now that the businessmen were out of the equation.

The image of a new increase in the lowest wages has thus been carried out by the Minister of Labor only with the union leaders and comes after several parties of the parliamentary left, such as ERC and EH Bildu, criticized the Government for closing the reform work with employers.

Yolanda Díaz sent two messages in this regard on Monday. The first, that after approving the labor reform "continued working to improve people's lives", while criticizing those who voted 'no' to the consolidation of labor rights in this legislation. The second, that he would keep his modus operandi based on "social dialogue", whether it resulted in a "tripartite, bipartite" agreement or without a social pact. "In this case it has been a bipartite agreement," Díaz stressed at this morning's press conference.

Tags: 000, euros, It will reach, January, minimum, month, one, salary, Spain, will apply