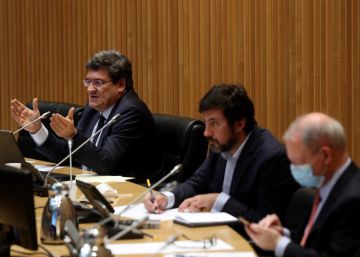 The Government is finalizing the details of a new income for “families who have serious difficulties in facing their basic expenses.” This is how the Government yesterday defined the group to which the so-called vital minimum income (IMV), a new provision of Social Security, which is the star project of the current Minister of Inclusion, Social Security and Migration, José Luis Escrivá. The Executive has accelerated the design and approval of this new aid at the behest of the Vice President of Social Rights, led by Pablo Iglesias, who in recent days has pushed for this minimum income to go ahead ahead of schedule in the Government program.

However, Iglesias was unable to publicly present this income yesterday, together with Minister Escrivá, as was his intention, since the head of Social Security, argued, in statements to the SER chain, that “we still have to close some fringe”. Although, Moncloa yesterday settled this controversy about who, how and when this measure would be presented, making a statement public, through the Secretary of State for Communication, in which he confirmed that “the Government will launch in May” this new help.

Said official communication from the Executive certified that the Escrivá and Iglesias teams “are working to accelerate the work to launch a minimum vital income, which will be permanent.”

Escrivá reiterated yesterday, as he already did on Wednesday in parliamentary headquarters, that “the design of the rent is very advanced. But to assess the number of households benefited We are crossing data with the Tax Agency, and some debugging still needs to be done, ”he insisted.

In this sense, he also repeated that the aid “will be ready in weeks.” In the minister’s opinion, this time is required for the regulations to be well structured. And he explained that not only must beneficiary households be detected “with precision”, because according to the impact it is aid for families, not for individuals, but also that “procedures must be established to be able to pay for it.”

This definitive design will allow the entrance to be a permanent benefit and definitive and not only to alleviate the situations of need that arose under the sanitary crisis. “The preparatory work we are doing is the same to make it temporary or definitive and it would not be understood that a measure like this was temporary,” Escrivá said. In recent weeks Iglesias had proposed a “bridge aid” until the final one was ready.

At the moment, the details on this minimum income are rather scarce. In terms of numbers, the Government estimates that one million households (made up of three million people) will benefit from this benefit. Half of these families have dependent children and 10% (about 100,000) are single parents.

Escrivá has also explained on several occasions that it will be a homogeneous income for the entire national territory and that it will be “compatible and complete” other minimum incomes existing in the autonomous communities. At this point, the minister, on Wednesday, praised, for example, aid of this type managed by the Basque Country, Navarra or Asturias. But this help will also serve to complete other very low incomes that some households receive, for example, from “underemployment,” Escrivá said.

In addition to the requirement of lack of sufficient income (the threshold of which is still unknown), the collection of this aid will have other “conditions” such as complying with the itinerary that the Administration designs for its beneficiaries. Specifically, the aim would be to link the minimum vital income to “inclusion itineraries” that may be in the workplace, guiding beneficiaries to find a job, “but there may be other types of itineraries,” Escrivá said. These other routes could include, for example, assistance to care centers by the mentally ill, or detoxification in the case of drug addicts; or attendance at basic training courses for illiterate or unqualified people.

The amount of this aid is the greatest unknown. At the moment only the proposal of the Iglesias team is known: a minimum aid of 500 euros per month that would raise up to 950 euros in case of having two or more children. According to this, the minimum cost would be 6,000 million euros per year. But it could rise to more than 8,000 million annually.

In any case, Escrivá said that its cost “will be a significant amount.” And to finance it, the government “will go to the debt markets.” This, he explained, will mean “an extraordinary jump in public debt” but added that “when normality recovers, it will also return to levels of debt and public deficit predicted before the crisis.” And he insisted that its cost is “within the fiscal programming” that the government had for the legislature, compatible with a reduction in the public deficit demanded by Brussels.