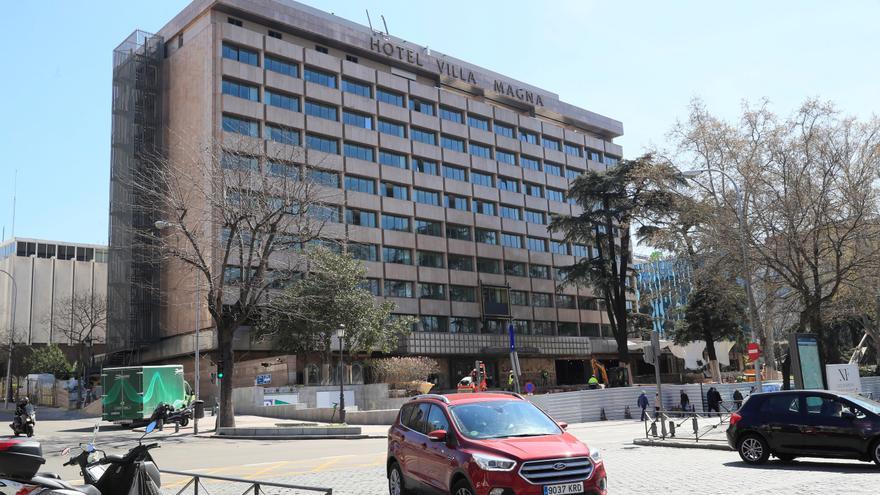 On October 22, the most traditional luxury hotel on Madrid’s Paseo de la Castellana will reopen its doors. The Villa Magna will resume its operations after closing due to the coronavirus and the remodeling works that have kept it closed in recent months, when the hotel industry has already regained its pulse, although at an uneven pace, after the pandemic.

It will do so under a slightly different name, Rosewood Villa Magna, and under the ownership of the Mexican group RLH Properties which, almost three years ago, starred in the most expensive acquisition of a hotel in the capital: 210 million euros to manage 150 rooms.

Then he paid the equivalent of 1.4 million euros per room, leaving out restaurants and common areas – the hotel sector usually measures profitability in income per room, with what is known as RevPAR (Revenue Per Available Room) so the stays are used as a reference – but they have not been the only cost in this corporate operation.

The group breaks down in its latest results reports sent to the Mexican stock market regulator what budget the Madrid hotel has had to face its reform. In total, more than 19 million euros.

Figure that he mentions through two internal operations. On the one hand, 7.5 million to support the renovation of the hotel. On the other, a credit line for a maximum amount of 11.8 million euros to carry out the reform and repositioning project of the establishment, as detailed in the results report at the end of the first half of the year.

The Mexican group RLH has among its shareholders large Mexican investors. For example, as co-presidents, the brothers Andrés and Felipe Chico Hernández, sons of Fernando Chico Pardo, hold one of the great fortunes of Mexico, which the magazine ‘Forbes’ estimates at more than 1,600 million dollars. Among its shareholders, until last year, there was also Allen Sanginés-Krause, the Mexican businessman investigated for opaque payments to king emeritus.

In addition to Villa Magna, in Madrid RLH also owns hotel Bliss -which it bought last July for 115 million euros, among others, from the Martínez-Bordiú family– and operates establishments such as the Four Seasons in Mexico City or the Mayakoba hotel complex in Riviera Maya, formerly owned by the OHL construction group.

In that aforementioned information to the Mexican stock market regulator, RLH also gives details about its debt position with Spanish banks. It points out that, on December 21, 2018, the Hotel Villa Magna, Caixabank and Sabadell signed a financing contract with a mortgage guarantee on the properties of the Hotel Villa Magna, which aims to fully refinance the debt that the company had contracted. A Euribor mortgage guarantee plus 215 basis points, to be paid in 29 consecutive semi-annual payments, maturing on March 1, 2033.

In the case of Villa Magna, the Mexican group operates it directly and, therefore, in its financial results it gives details of what happened in recent months. For example, it breaks down that Madrid has been one of the capitals where the pandemic has hit the most, “with the highest rate of infections and deaths in the world from coronavirus, which prompted the Government to take stricter measures and close the entire hotel industry and the city’s hospitality industry, thus closing the Villa Magna “, he reflects.

In Madrid, the Rosewood Villa Magna will have to ‘rub shoulders’ with a hotel offer that in recent months has grown to the highest range, with the reopening of the Ritz, under the Mandarin chain; and the Four Seasons, just a few meters from the central Puerta del Sol or the.

Three hotels that compete in luxury and price. The Rosewood Villa Magna reopens with a ‘cheaper’ price per room, 650 euros per night (750 euros, with taxes), which corresponds to Sunday, November 21, which also includes a reopening promotion. However, the most expensive room – with capacity for six guests – for the same night, reaches 9,000 euros, according to the rates published by the hotel chain

That same day, the cost per room of the Mandarin Oriental Ritz starts from 990 euros, taxes included; and the Four Seasons, the 700 euros.

The Rosewood VIllamagna, has almost 30,000 square meters built and another 7,500, of land and, facing its reopening, it follows the same strategy as the other large luxury hotels, betting on a gastronomic offer with the stamp of a renowned chef. In this case, it will include the restaurant Amós, by chef Jesús Sánchez, who already has three Michelin stars in the Cantabrian ‘Cenador de Amós’.