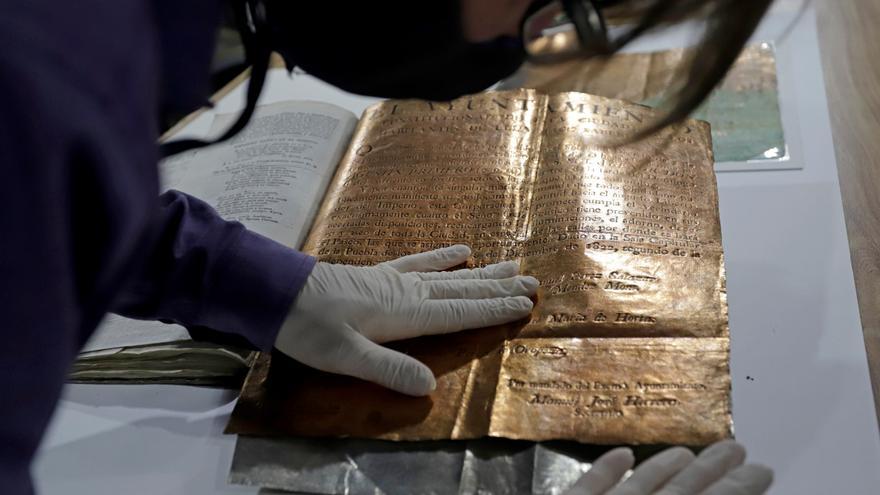 Puebla (Mexico), Apr 18 (EFE) .- A document drawn up in gold leaf reveals that the state of Puebla resisted stopping swearing to the king of Spain after the independence of Mexico in 1821, being one of the last cities to swear loyalty to the new Mexican emperor, Agustín de Iturbide.

After two decades of being hidden in the Municipal Archive of Puebla, a book with documents dated 1822 has been found, including a gold foil book with unique characteristics in Latin America.

When reviewing the text they realized that it was the pledge of allegiance of the Poblano Cabildo to the Mexican emperor during the process of independence from Mexico that shows that Puebla signed its accession on December 5, 1822.

Iturbide was proclaimed emperor of independent Mexico on May 18, 1822 and crowned on July 21 of the same year, but with the disputes between Republicans and Liberals it was agreed to proclaim the Republic through General Antonio López de Santa Anna, achieving the abdication of Iturbide on March 19, 1823.

Alejandro Hernández Maimone, director of the Municipal Archive of Puebla, explained to Efe that the document presents various damages such as a green tincture and some fungi caused by humidity, which is why a conservation and maintenance process began.

There are two other similar documents “one more in gold foil and the other in silver-colored material, although it has not yet been determined whether it is white gold or silver,” he said.

These last documents were located in a volume called “various documents”, in which news is collected in newspapers from 1822 and related to information on the Iturbide swearing-in.

“This document speaks of an interesting process in the formation of Mexico as a country, because the government boards or councils were swearing loyalty and accepting independence,” Hernández Maimone indicated.

“This supposes that the Town hall of Puebla resisted to stop swearing loyalty to the king of Spain,” he stressed.

The specialist assured that the document found is unique in Latin America, because it has a different technique or invoice.

“A base paper was used in which an adhesive was placed to place the gold leaf and later put it in a press, since the writing is embedded and not painted as it was traditionally done,” added the specialist.

He explained that the conservation process has already begun, which consists of removing the two bound documents from the book to place them in special guards that have the necessary conditions for their conservation, since they are almost 200 years old without having had due care before.

Ezequiel Barba, restorer of the Municipal Archive of Puebla, revealed that the first document found suffered a microbial attack when exposed to a source of humidity, hence the importance of rescuing and stabilizing it.

“It was decided to extract the document due to the advanced deterioration process and because it presented a very unique manufacturing technique,” said Barba.

An analysis remains to be carried out to determine the materials it contains, its radiation, as well as to know the adhesives they used, in order to know what their care should be for the next few years, concluded Barba.