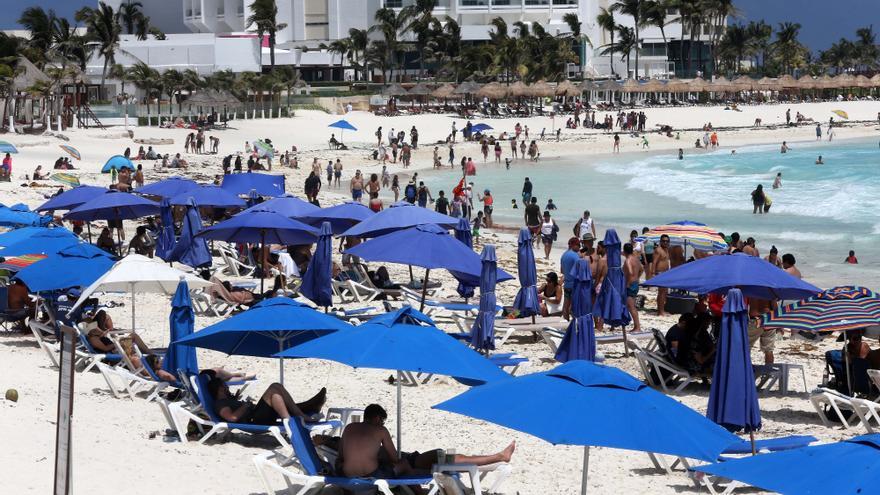 Cancun (Mexico), Mar 28 (EFE) .- The destinations of Quintana Roo, a Mexican Caribbean state, operate at 60% of their capacity to receive at least 600,000 tourists within the next two weeks of vacation despite the fear of a new wave of covid-19.

The arrival of national and international travelers alerts local authorities, which maintain an open-door policy to reactivate the economy, despite recognizing the increase of up to 200% of infections in municipalities such as Isla Mujeres and Felipe Carrillo Puerto.

Against this background, the state government announced “health bubbles” in areas such as Cancun, Riviera Maya and Tulum, with the promise that they will be spaces free of covid-19 to give security to visitors with a certificate for tourism service providers.

But this program that began last year barely has 250 companies registered with a register of more than 2,000 establishments.

Mexico is the third country with the most deaths from covid-19 in the world, with more than 201,000 deaths and 2.2 million confirmed cases.

But it also became the third most visited in the world in 2020, when its tourism GDP contracted 28%, but received more international tourists than other nations due to its lax sanitary measures, which never included suspension of flights, quarantines or mandatory tests.

Proof of this is the controversy of the 44 students from Argentina who tested positive for COVID-19 when they arrived in their country in mid-March after vacationing in Cancun, where false tests were performed in two unlicensed laboratories.

Mexican authorities have promised to review permits, but so far they have only closed the two laboratories identified in the case of the Argentines.

In an interview with Efe, Javier Aranda, executive director of the Cancun, Isla Mujeres and Puerto Morelos Hotel Association, affirmed that they work to create awareness among visitors.

“If we see the experience in the case of Argentine tourists, they are young people who sometimes are not fortunate enough that they are so aware that you have to be a little more careful,” he said.

The businessman argued that care is also “the responsibility of those who come.”

“As long as you follow these protocols, as long as you behave with commitment and responsibility, no company can ensure 100% immunity if people are not the ones who take care of themselves,” he emphasized.

Mexico’s main tourist destination is also facing the controversy of a recent shooting in a bar that left one dead and three injured, a reminder that the insecurity crisis has not passed.

Despite the active threat of the pandemic, businessmen hope to lift the economy after the 8.2% annual decrease in GDP in 2020.

The private sector expects 7 million visitors in the different tourist destinations in Mexico with a spill of almost 26,500 million pesos (about 1,325 million dollars), estimates the Confederation of National Chambers of Commerce, Services and Tourism (Concanaco-Servytur) .

“We are going to be talking above 100,000 people every day, that will be within these first days and at the top we are already talking about almost 105,000 people, a little more on the days from Thursday to Sunday of Easter”, explained the hotelier Aranda .

At Gaviota Azul beach, located in Punta Cancun, Efe found examples of people who have lost their source of income, such as a musical band that before the pandemic entertained social events, but now plays on public roads.

“We are the Wild Vakeros Band, we live here in Cancun, we are from Quintana Roo, so we dedicate ourselves to working in the events that are in the city, but now because of the pandemic we are working here, looking for you,” said the leader. , Gaspar Chí.

Their income each day depends on the clients they get on the beach, where they only get 300 pesos (just under 15 dollars) per tourist.

“The truth is that many clients are from the United States, but they are Mexican, that is, they come from a little bit of everything, they also come from other states and well, whatever they want, we will also vary our repertoire,” he explained.

On the island of Cozumel, where the greatest economic effects of the pandemic are recorded, service providers expect an improvement from June with the announcement of the reactivation of cruise ships.