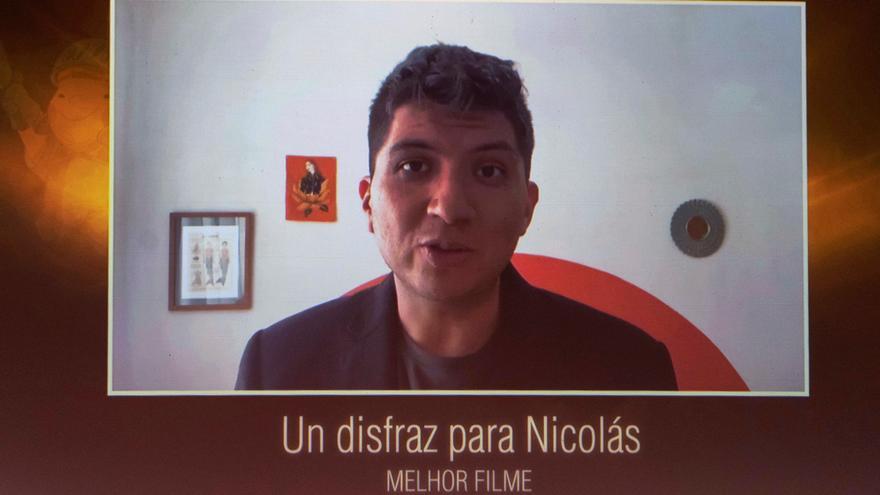 La Laguna (Spain), May 29 (EFE) .- The Mexican film “A costume for Nicolás”, Eduardo Rivero’s debut, written and produced by Miguel Ángel Uriegas, won this Saturday at the Teatro Leal de La Laguna (Tenerife, Spain) the award for best feature film of the year in the fourth edition of the Quirino Awards, instituted to promote the Ibero-American animation industry.

The film tells the story of Nicolás, a boy with Down syndrome who, with the help of his souvenir mother’s costumes, embarks on an adventure in a kingdom submerged in chaos.

This is the third film produced by Fotosíntesis Media, an animation production company that is committed to raising awareness through children’s cinema for the whole family.

Eduardo Rivero has dedicated this “great recognition” to all his colleagues, “to all the artists who did their bit” and who made it possible. “We are very happy with the result, with the reception of the people and with all their support,” he asserted.

The Quirino for the best animated series has fallen on the second season of ‘Petit’, by Bernardita Ojeda, a production of the Chilean company ‘Pájaro’, in collaboration with Argentina and Colombia, which was nominated in the last edition of the International Emmy Kids Awards.

This series for preschoolers tells the adventures of a five-year-old boy who is able to resolve his conflicts from his own original perspective.

Ojeda, who was also a finalist for the Quirino 2019 with the first season of this series, has regretted not being able to be at the gala, but said that “from Chile we send you a very big hug, also representing Colombia and Argentina, with whom we have worked. Thank you very much and keep the party going ”.

After receiving the award for best short film in the first edition of the Quirinos, the Spanish director Alberto Vázquez has once again won this award with “Homeless Home”.

Produced by ‘Uniko’ together with the French ‘Autour de Minuit’, the short presents a social story in the key of a fantastic parable, with witches, orcs, sorcerers and ghosts as protagonists.

In addition to these three main categories, the Quirino Awards have also recognized six other works. Among them, “Memories for Sale” stands out, the first work by Manuel López, which was recognized as the best animation school short film.

Produced by the Veritas University and made in traditional 2D, it is the first work from Costa Rica to be nominated and won in the Quirino.

Argentina’s “Rutas”, directed by Alejandro Imondi and produced by Osa Estudio, received the award for the best commissioned animation and “GYLT”, from the Spanish studio Tequila Works, was established as the best video game animation. An award given for the second time after its creation last year.

The honors were completed with the delivery of three prizes in the technical categories of best visual development, best animation design and best sound design and original music, which went to “Elo” by the Portuguese Alexandra Ramires, the Spanish short “Umbrellas” , co-directed by José Prats and Álvaro Robles, and “Loop”, by Pablo Polledri, respectively.

The finalists were selected from a total of 265 works from 17 countries, and the jury was made up of the French Jean François Tosti (TAT productions), the Portuguese Joana Toste (animator and director), the Brazilian Paula Taborda (Planeta Junior) and the Spanish Sergio Jiménez (Pinkman.TV).

During the gala, tribute was also paid to the Cuban cartoonist and animated film director Juan Padrón, creator of classics such as “Elpidio Valdés” and “Vampires in Havana.”

His daughter, Silvia Padrón, valued her father’s “genius”, “who made his entire audience laugh for decades” and who put the name Cuba on the map of world animation.

“Today, unfortunately we lack his jokes, his desire to live, his candid gaze, his complicity and his tenderness, but we still have his works and his witty phrases,” he concluded.

The spokesmen for the Quirino Awards, José Luis Farias and José Iñesta, have emphasized that the initial “flame” of these awards continues “more alive than ever”. “We are more and more and we notice the encouragement of the entire Ibero-American community that believes in this dream of the Quirinos,” Farias pointed out.

However, “this dream must have accomplices”, they have abounded, such as the institutions and companies “that support us” and to which “we only have to say: keep believing. Keep lighting the way. May the flame never go out. Long live Ibero-American animation! ”, They have cried out.

The awards, which have been presented by actress Noelia Noto, owe their name to the creator of the first animated feature film in history, Quirino Cristiani, who in 1917 directed “El Apóstol”, an Argentine production in which 58,000 drawings made were used by hands and several models that represented public buildings and streets of the city of Buenos Aires.