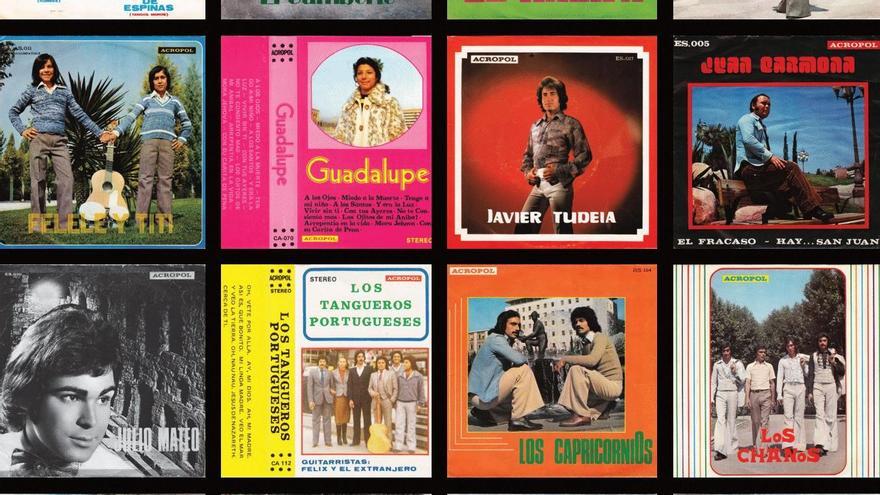 In the seventies, the Madrid rumba was acquiring its own entity. Groups such as Los Chorbos, Los Chichos or duos like the one formed by the Muñoz Barrull sisters – read Las Grecas – set the pace of the city from the margins.

Songs of love and tear, teal and lack of parné, sounded from the loudspeakers of the bailongos. It was the cursed expression of a generation that, without losing sight of the musical heritage of its elders, extended flamenco to the electricity of rock and funk.

Driven by the current that was emerging then, Noumbar Hamathis – an Egyptian immigrant living in Madrid – devoted himself to touring the flamenco night scenes; tablaos like Villa Rosa, Los Canasteros, Torres Bermejas or Corral de la Morería were places where the artists of that time worked, singing, playing and dancing for the tourists.

Fond of the gypsy atmosphere, Noumbar entangled the artists so that, when they left the tablao, with the daylight now, they would go together to the studio he had on Avenida de José Antonio, today Gran Vía. He locked them in the A room that was enabled to record radio jingles, served some Segovians in a long glass and immediately pressed the “record” button. There was never a second take.

From the very heart of the hangover a lot of songs were recorded. Later, in the street, Noumbar threw the photos that were going to be used for the covers of the 45-rpm cassettes and records that he himself distributed through street markets, gas stations and road bars as one exits the Extremadura road.

With these artisanal ways, the Acropol company took over a good part of the marginal disc market. In such a way, artists like Antonio el Kalifa or Tony el Gitano had the opportunity to record their first songs. The latter, Tony el Gitano -rumbero de los Madriles- recorded for Acropol a piece that today is part of the memory of the streets, a rumba with crude lyrics entitled “El Failda”, and which is the origin of “Juan Castillo “From Los Chichos, that gypsy who a snitch went to poach and because of him lost the life of a bucharno. Na na nana nanana na na na na. The duo Estopa has a version of this legendary song that Camarón liked so much.

A few years ago, the Discos Templo record label released a compilation entitled Acropol, a gypsy sample of what the sound of Madrid was at that time, when Movida had not yet taken on the organic relationship between music and the street; when the music industry had not yet been mechanized and the bongos had not been replaced by a Colón boat loaded with the mediocrity of some posh children of poor upbringing and worse hearing. Those were artisan times that conserved the fierce flame of the spontaneous; Times of which today there are pieces of memory engraved for the remains by Noumbar Hamathis, a guy as curious as he is enigmatic.

These days there is an exhibition of Acropol’s covers and artists in tank size, within the Miradas Flamenkas cycle; a proposal with live flamenco and round tables that we owe to the insistence of the journalist Paloma Concejero for propagating the most racial music of our country. As everything has to be said, with initiatives like this one, Marta Rivera de la Cruz has been right when it comes to choosing the team to return flamenco to its origin, that is, to the streets.

Curators of the exhibition: Daniel Gutiérrez and Pablo López