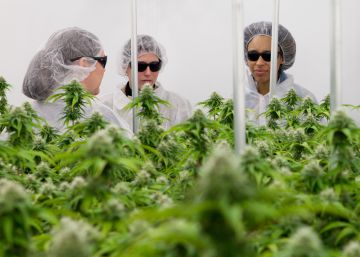 The conference Cannabis Europe It serves to analyze the use of this substance as a medicine and to demand that governments open up to its regulation. Shortly after one of its editions in London, the United Kingdom approved its use; France’s parliament began studying one pilot project after another in Paris. Last week the industry met in Madrid and has no qualms about recognizing that it is one of its pressure and awareness measures to legalize medical cannabis in Spain.

Axel Gille, general director of Aurora Europe, one of the leading companies in the sector, opened the congress and, in an interview with this newspaper, claims to have founded hopes that the new government will listen to their claims. Podemos, one of the coalition parties that supports the Executive, had as one of its points of the electoral program “decriminalize cannabis and legalize its use for medicinal purposes.” The PSOE, which controls the Ministry of Health, was warmer: “To establish a study commission to open an in-depth debate on cannabis knowledge and its effects on health.” To questions of this newspaper, the department directed by Salvador Illa has preferred not to pronounce on the subject and has referred to the appearance that the minister will make in the Health Commission in Congress on the 27th, when he will break down his strategic lines for this term .

Medical cannabis is not (necessarily) synonymous with smoking a joint with a prescription to relieve pain. Among the many active ingredients that make up marijuana, there are at least two that appear to have certain analgesic effects on humans: THC (which is the substance it places) and CBD. In Spain there are already approved drugs that contain them, but with very limited therapeutic indications: for sclerosis and for childhood epilepsies. The first objective of the industry, Gille explains, is to expand the possibility that doctors can prescribe these drugs for other ailments, as a dozen countries in the world have already done.

According to Manuel Guzmán, Professor of Biochemistry and Molecular Biology at the Complutense University of Madrid and one of the authorized voices on the subject, there are five applications for which there is “rigorous” evidence on the usefulness of cannabis: inhibition of nausea and vomiting in cancer patients; increased appetite and attenuation of weight loss, especially for patients with cancer and AIDS; pain inhibition, especially chronic, cancer, migraine or postoperative type; inhibition of muscle stiffness, which may be useful in sclerosis, and seizure inhibitory action in epilepsy refractory to other treatments. “The vast majority of patients use it to relieve pain and for this there is no approved medication in Spain, so they go to the black market or cultivate them themselves,” he says.

The next step of the industry would be to go beyond these medicines to introduce others based on the vaporization of these two active ingredients, which as they are combined have some applications or others and also place more or less. “Medications that pass through the digestive system [como los que hay aprobados en España] It takes about an hour and a half to take effect. For pain spikes it is more effective than inhaling it; in this way it reaches the bloodstream in just over a minute, ”says Guille. Again, this does not mean smoking weed. There are devices that heat the isolated and purified active ingredients, without the many other substances that the plant contains.

The European Drug Observatory published in December 2018 a guide on medical cannabis that could guide governments when approving its use. Recognizes evidence, although “weak” for nausea or vomiting in chemotherapy and appetite stimulation in people with HIV. He describes it as “moderate” in muscle spasms, chronic pain and childhood epilepsy. It also analyzes its effectiveness in cancer palliative care, anxiety, depression and sleep disorder, for which the evidence is “insufficient.” The observatory ensures that current knowledge is “limited and with important scientific gaps.”

Guzmán says that the main problem is “the poor quality of many of the clinical studies”, due in large part to its “strict international control.” “On the other hand, very few have included general quality of life among their primary variables, which is the main reason why many patients suffering from chronic and debilitating diseases use it. In sum, I believe that we should certainly learn much more about the efficacy and safety of cannabis and cannabinoids, but I also believe that we already have a sufficient level of knowledge about them to be able to treat many patients effectively and safely. You have to investigate more, yes, but you also have to act, ”says the professor.

Behind this, in addition, there is a huge business that could move up to 3 billion euros in Spain in 2028, according to the consultancy Prohibition Partners. The industry knows this, as well as that there is enormous support from the Spanish population to allow medical cannabis: 84% are in favor, according to a 2018 CIS barometer. Experts calculate, taking into account figures from other countries, that in Spain these drugs would use between 200,000 and 400,000 people.

The medical cannabis business became one of the investment stars in international exchanges a few years ago, but this euphoria was declining as time went by and countries were slow to regulate it. “There has been no opening as fast as previously thought. I think for two reasons: one, cannabis still has the stigma of being a recreational drug for hipies and that comes from outside. The second is that doctors still know little about the subject, because it is something that is not taught in the faculties, ”says Gille. But there is more: other specialists think that the evidence in favor is not robust enough to introduce new analgesics in the market, that the fight against pain already has a wide range of medicines and that one must be very cautious when it comes to introduce new ones that can produce dependencies.

There is division and internal debate in the countries. While some reject it, others, like Spain, study it already there are several Europeans whose health systems finance these substances with medical prescription: Germany and Luxembourg do so for certain ailments up to 100%, while Czech Republic, Italy and Denmark defray them partially.

First step for recreational use of marijuana?

The debate to extend the legalization of medical cannabis usually goes hand in hand with another: also allow the recreational use of marijuana. Some countries and certain US states have taken a first step by allowing smoking this plant for medicinal purposes, something that goes beyond what the industry, at the moment, claims in Spain, where they focus on talking about the two principles purified assets: THC and CBD. Allowing them does not require major regulatory changes in a country and is something that can be done relatively quickly. However, approving recreational use, which has allowed for the moment Holland, Canada, Uruguay, 11 US states and, more narrowly, South Africa and Georgia, means going against some international regulations. “You can, but it is more complicated,” says Manuel Guzmán, Professor of Biochemistry and Molecular Biology of the Complutense.

Those who advocate allowing it for recreational purposes argue that it is about putting control and benefits in the hands of the State that drug traffickers take today. Against these are the arguments about health: it is a psychoactive substance that can generate addiction and mental disorders, as well as cognitive alterations that can affect especially the younger consumers of this substance.