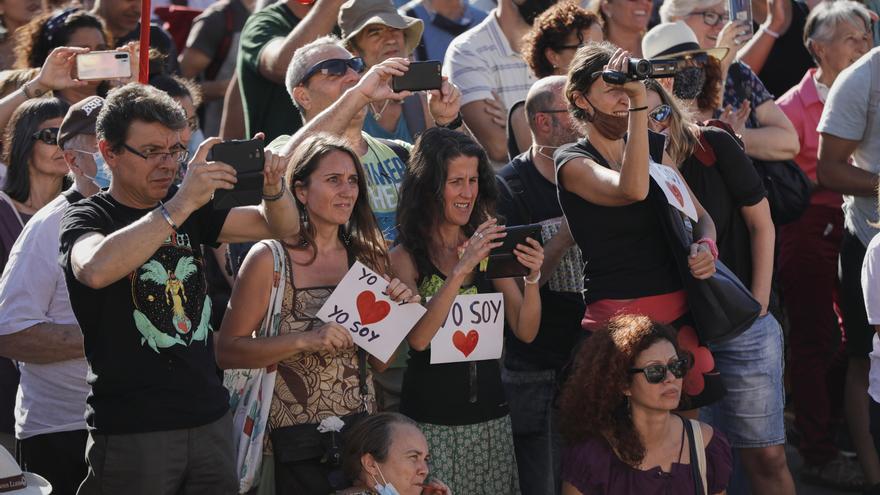 The denialist movement of the coronavirus pandemic gathered just over 2,500 people – police figures – in the Plaza de Colón in Madrid. With more than 800 active outbreaks in Spain in the middle of August, many of the protesters concentrated under a few premises, but mainly against an element of protection that was conspicuous by its absence in the protest: the masks. After months sowing doubts about potential vaccines, the argument that masks kill more than the virus, or that they represent an intolerable cut in freedoms, has gained strength. Also that asymptomatic people do not really exist or do not infect, so quarantines or physical distance would not be necessary.

Javier Padilla, family doctor specialized in public health and author of Epidemiocracy, I remembered this weekend in an article that, faced with “activities with no immediate tangible results and that allude to the collective,” opposition movements have always arisen. Padilla explains to elDiario.es that, “in general terms, in the acute moment of an epidemic there is unanimity in the response, but when the scenario changes and the restrictions continue to be maintained, this negative response tends to increase.” For him, given the risk that this type of position will increase, “there is a need to strengthen the message of the measures taken with the voice of public health, guided by scientific evidence but that exceed the published evidence because we are in a situation of exceptionality in which it is difficult to find comparisons “. Especially thinking of people who are not in the extremes but in a gray area, who have doubts.

The image that deniers have viralized during these days is that of a mask –which is already compulsory in all public spaces in Spain– in which they falsely claim that, with it on, the user breathes their own CO2 and, therefore, It can cause hypoxia, lack of oxygen. Hygienic and surgical masks intended for the general population They are marketed with UNE0064, UNE0065 and UNE14683 labeling. They comply with a breathability standard, that is, they guarantee that with them you can breathe correctly according to scientific parameters.

Masks are not a new product, they are part of the routine of health workers with and without a pandemic. “If they produced hypoxia, no surgeon would be left alive,” Padilla ironically. Yes, there are people who may find it difficult to breathe, “but it is linked to being overwhelmed by having something on the face, not to the inability to exhale.”

For those who have this problem, “in Primary Care we recommend that you go to a secluded place, take it off, breathe calmly as needed”, explains Padilla. There are assumptions under which a medical receipt can be issued if they really cause recurring problems, as in the case of those who suffer from asthma or anxiety.

There has been no serious research linking hypoxia to face masks. On the contrary, the Asepeyo Innovation and Research Center, a Spanish institution that brings together companies specializing in occupational health, published a report in July 2020 in which, after measuring oxygen and carbon dioxide, they concluded that “there are two very clear pieces of evidence that rule out cases of hypoxia “. The first was the oxygen saturation in the inspired air between the mask and the face. “The key is that when we breathe in, apart from this small volume of air that we measure between the mask and the face, we are going to take air from outside the mask, an average of 500 ml in total”, because self-filtering masks allow particles to pass through. of CO2 and O2 both from inside outside and outside inside. The O2 saturation data was found “always normal”. The second is the same as Padilla pointed out: “there have been no cases of hypoxia” not even among workers who have worn it for more than six hours in a row during these months. Another study published in 2008 in the journal Neurosurgery found that in surgeons, blood oxygen levels were reduced after the first hour of surgery, but they could not show that it was due to the mask, stress or other factors.

It took the World Health Organization (WHO) several months since the new coronavirus to recommend masks to the general population. But not because they were harmful, but mainly because during the worst moments of the pandemic in Europe there was a shortage and their health use had to be prioritized. Even then, in The Lancet, They already explained that apart from dispensing, there was no dichotomy as to whether they worked with this specific virus: “The absence of scientific evidence of its efficacy should not be equated with evidence of ineffectiveness, especially when faced with new situations with limited alternative options” . Today the global supply of these products is guaranteed and more is known about their role, with plenty of examples. In Missouri (USA), this summer, two infected hairdressers served 139 clients. None were infected because they wore masks.

Another reason that deniers disperse is that the transmission of asymptomatic people is null or that there are no such patients, and their increasing detection is part of the conspiracy. They continue to spread in viral videos a misunderstanding that occurred in June with the WHO, when its technical director, Maria Van Kerkhove, ruled out that the asymptomatic transmitted COVID-19. They immediately corrected themselves: asymptomatic and presymptomatic “hours or days before” can be contagious, although the exact degree is not yet known, said Mike Ryan, the executive director.

The WHO does not hide that “it is not yet known how often it happens” that asymptomatic people transmit the virus, and that, as the Ministry of Health spokesman Fernando Simón has also pointed out on more than one occasion, it occurs to a lesser extent than to starting with people who end up serious.

The fact that more asymptomatic patients are detected now than months ago does not respond to the fact that there are more, but to a simple diagnostic strategy: If the scan works, not only is it identified who goes to the hospital with a serious condition, but also who has been contacted but has not yet developed the disease. It is not that the virus, suddenly and according to the administrations, only attacks young people who barely suffer from it, but in March we only saw the tip of the iceberg and we did not know that there were so many asymptomatic below.

Mario Fontán, coordinating physician of the ARES association, which brings together residents specialized in Preventive Medicine and Public Health, reasons that he does not yet know the real role of asymptomatic patients, as of many other things that surround the virus, it is logical: ” that around 20% of those infected are real asymptomatic. But the problem begins with the definition, there is a fine line that separates the asymptomatic from the presymptomatic, from the mild symptoms … it depends on what is reported by the person, if they felt really bad one day, or very tired but did not give it importance … it is not entirely clear. You work with this all the time with a memory bias “.

“The ridiculing tactics are pointless”

Fontán admits that he is not clear on how this movement will be dealt with effectively. “Not everyone talks about 5G and Bill Gates’ microchip, there are people who say things that may make certain sense, like wondering if the first vaccine will have guarantees of safety. There is a spectrum and not everyone is a staunch extremist”, ponder. “I think the tactics of ridicule and insults do not make sense: you have to convince and understand what leads them to this,” he continues. Also remember that “Miguel Bosé’s mother died of coronavirus. There are people who you will not be able to convince, if they have not even been convinced by living it so closely. They have these world-wide conspiracy mindsets. But I don’t think either that they should be given the same weight as the millions of people who know that the disease is dangerous. ”

Javier Padilla thinks similar. He insists that he is not so concerned about those who went to Colón, but those who see those from Colón and consider it, “those who do not understand why the masks have to be put on in the street and then nobody controls you in other areas And I think that to convince them you have to change the communication strategy. ”

For example, “it must be explained that wearing it outdoors, even if you are with few people, is based on generating a culture of the mask. Of course, it must be understood that masks, although they are mandatory everywhere, not everywhere. they are just as effective, and where they are most effective is in closed private spaces, where no one knows if you are wearing it, “but for that you have to get used to wearing it and naturalizing it. We must convey why this culture of the mask is being generated and that they are public health decisions that combine many issues, also the context in which they are applied, such as being harder with this in Spain, one of the countries that has suffered more. ”