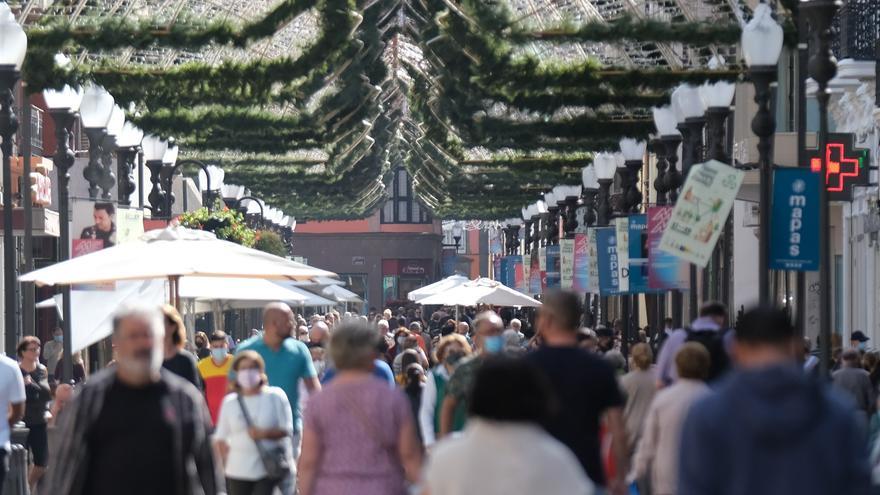 The mask will again be mandatory in outdoor spaces from tomorrow to slow down the advance of the omicron variant. This was announced yesterday by the President of the Government of Spain, Pedro Sanchez, within the framework of the extraordinary Conference of Presidents. For this, the leader of the National Executive will take today to the Council of Ministers a decree law, which also includes other measures aimed at fighting against the sixth wave of the pathogen. "The decree law will also reinforce human resources so that we can pull in early retired health personnel, if necessary, and implement reinforcement for vaccination and other health-related needs," explained the President of the Government of the Canary Islands, Ángel Víctor Torres , after their participation in the meeting. Another of the agreements reached is to organize the Conference of Presidents every ten days.

It must be remembered that the Archipelago freed itself from the mandatory use of the mask in outdoor areas on June 26, after 45 weeks. And it is that the Council of Ministers approved on June 24 a Royal Decree that allowed to dispense with the preventive recourse in these scenarios, as long as an interpersonal distance of at least one and a half meters could be maintained. "We have shared the need to make it mandatory outdoors," said Torres.

On the table was also the importance of vaccination. Aware that the vaccine is "the best weapon" to face SARS-CoV-2, Sánchez proposed to the regional presidents to promote inoculation devices with personnel from the Armed Forces. Among its goals is that 80% of the population between 60 and 69 years old is vaccinated with the third dose before the end of the year; that 80% of those between 50 and 59 are so in the week of January 24; and that 80% between 40 and 49 years have the booster dose in the first week of March.

«On December 27 vaccination began in our country, so in a few days it will be a year. Now we have more than 38 million people vaccinated and thanks to this we can live with the covid and even with this tremendously contagious variant, without having the data we had last year, "said the Canarian president. "We have less occupation of ucis, less income in hospitals and less affection," he continued, "but the moment we live in is worrying."

In this sense, he highlighted the notable increase in infections that usually register with the arrival of rest periods. “Whenever Easter, summer holidays and Christmas have arrived, we have spikes in infections. However, the data show that vaccination is essential. '

Taking into account the figures collected this Wednesday, the population group that concentrates the lowest accumulated incidence in the Canary Islands is the one that corresponds to people over 80 years of age. Specifically, the indicator marks 188.99 cases per 100,000 inhabitants. However, the other side of the coin is put by the twentysomethings, who have the highest record: 1,394 positives per 100,000. “This is precisely the age group with the lowest vaccination rate, 72.6%. Where there is more vaccination there is a lower accumulated incidence in this sixth wave, and where there is less vaccination there is a higher incidence ”, stressed Ángel Víctor Torres.

Based on the words of the president, at present, the nurses of the Canary Islands are inoculating 20,000 doses of the vaccines every day. Now, the great challenge consists of exceeding this count through the mass vaccination points, which will remain open every day, including holidays. “I ask fathers and mothers to understand that it is essential to vaccinate their children. It is true that vaccination is voluntary, but I request that you make an effort so that we have as many vaccinated as possible.

During the meeting, the President of the Government of the Canary Islands also raised the need for legal harmonization between the different regions so that "different positions" are not produced by the higher courts of justice. “We are in favor of co-governance. In fact, there are communities that have made decisions related to different sectors or capacities before others. The Canary Islands is one of the most restrictive, for example, in terms of the maximum number of people that can meet at level 3. We respect each community to act, but it would be good if there were legal harmonization throughout the country.

With regard to the controls carried out at the airports, the president highlighted the intense work carried out in the Archipelago and which has paid off. «Of the 10,345 positives that we have had in the Canary Islands in the last week, 49 have been due to imported cases detected at airports. That means that the percentage of positives coming from abroad stands at 0.5% ”.

The numerical value shows, therefore, that community transmission is taking place "due to the movement and the omicron variant" and, fundamentally, among residents of the Islands. "We have to activate vaccination along with other necessary mechanisms such as the mask, hand washing, civic responsibility and compliance with the measures taken by administrations."

Today the epidemiological data of the region will be analyzed to determine if any of the islands should change their alert level.

The TSJC receives the request to endorse the certificate

The Second Section of the Administrative Litigation Chamber of the Superior Court of Justice of the Canary Islands (TSJC), at its headquarters in Las Palmas de Gran Canaria, received yesterday the request from the Ministry of Health of the Canary Government for justice to rule in relation to the mandatory use of the 'Covid certificate' in the islands at alert levels 3 and 4. Thus, after admitting the request for processing in the central hours of the day this Wednesday, the Chamber will have 72 hours to resolve the request, according to sources from the TSJC point out, adding that the deadline would be this December 25. Last Monday, the Government of the Canary Islands announced that the legal services of the Autonomous Community were going to transfer to the TSJC the Health order in which judicial endorsement is requested for the mandatory use of the 'Covid certificate' in the islands at alert level 3 and 4. The petition affects hotels, restaurants, nightlife and gambling establishments with a capacity of at least 30 people and where it is possible to eat and drink; events and celebrations attended by more than 500 people; sporting events attended by more than 500 people and also in which that capacity is not reached if food and drink is allowed; public shows of more than 500 people; cultural activities in cinemas, theaters or auditoriums with a capacity of at least 50 people; gyms and similar equipment; health centers for visits to admitted patients - or if accompanying consultations - and in social health centers. In the case of football and basketball matches of the Second Division and Endesa League, the limitation is exempt pending the decisions made by the league assemblies in coordination with the central government. | Europa Press