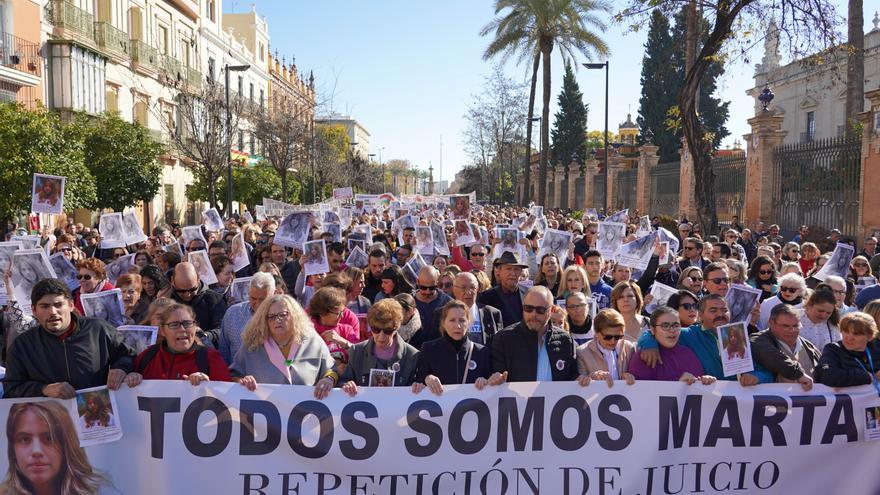 On January 24, it was the 13th anniversary of one of the cases that has attracted the most social and media attention in Spain. The young Sevillian Marta del Castillo disappeared and was murdered that day in 2009. The case occupied many hours of television and unleashed a huge social reaction with the aim of finding her in the midst of the numerous changes of version of the accused. Her family still does not know where her body is, while her former boyfriend, Miguel Carcaño, is serving a sentence in the Herrera de la Mancha prison in Ciudad Real.

The list of cases is long of disappearances of women and femicides that in their day were not treated in the media or socially beyond that as events, almost as if the events had occurred simply due to bad luck. He spent in 2018 with the girlfriend of the so-called 'king of the cachopo', who was finally an officially confirmed victim of gender violence, but also with the girls of Alcàsser or Rocío Wanninkhof. The murder after an attempted sexual assault of Diana Quer in 2017 amplified the claim by feminism to understand the concept beyond the partner or ex-partner.

Looking back and reviewing some of these media cases from a gender perspective is a practice that has become increasingly common, but what about the Marta del Castillo case? In what has to do with the judicial, still there is an open line of investigation in a court in Seville, while the young woman's confessed murderer now accuses her brother, who was acquitted. Today it is the ex-boyfriend of the young woman who is serving a sentence, but the case was not investigated at the time as gender-based violence within the couple or ex-partner, which is protected by the comprehensive law approved in 2004, five years before of his disappearance.

"The result of the final sentence would have been the same, but Marta del Castillo does not integrate the official statistics of gender violence and without a doubt today it would be included, it would have been treated like this and instructed in a specialized court", believes the president of the Observatory against Domestic and Gender Violence of the General Council of the Judiciary, Angeles Carmona. So, explains the expert, "the Supreme Court required a minimum stability and duration in the relationship (hers had lasted a month); at present, it is considered gender violence when it occurs in sporadic relationships and even online ".

This reading of the case appears in the documentary 'Where is Marta?', which arrived on Netflix on November 5 and shows the loose ends that remained. He barely goes into depth on the subject, but he does name it and reproduce a television program of the time in which it is addressed. "If we are responsible, this issue has to start being called by its name: it is a clear case of gender violence because it has put an end to the life of her ex-partner," says one of the collaborators. In front of her, another of those present refutes her, defending that the "domestic violence" prosecutors with whom she has spoken "are not so clear about it", although "some have pointed it out". The family, for its part, appears asking the press not to treat Miguel as her ex-boyfriend because "a one-month relationship with the murderer does not even deserve that term," his uncle said then.

Carmona recalls that at the time it was something "that neither the prosecutor nor the private prosecution requested, nor was the judge agreed ex officio." The specialized courts, which instruct gender violence, already existed since 2005, and "there was talk in the judicial field of that possibility", but finally the inhibition did not take place. "You have to place yourself in 2009 and you have to think about the enormous evolution that we have experienced as a society, a social change that in the field of justice has meant a leap in jurisprudence in many aspects," adds the expert.

At the time the young woman disappeared and was murdered, the forensic doctor Miguel Lorente was a delegate of the Government against Gender Violence. "At that time there was confusion and the investigation was not linked to the couple's relationship. The delegation collects as such what the investigation reflects," he explains. Today, "without a doubt", he considers that it was sexist violence even if the speculations about the participation of more authors, who were acquitted, were true, the expert believes.

At the time, one of the lines of investigation was the possibility that Marta del Castillo had suffered a sexual assault, which was one of the versions that Carcaño gave and something that the Prosecutor's Office did validate in its request for conviction. "One of the characteristics of gender violence, not exclusive but very typical, is the disproportion in the attack. The objective is not only to attack, but also to instruct, and to impose the position it is done in a way that the same aggression serve as a lesson", explains Lorente. Even so, all the experts consulted refer to the complexity of the case as the body has not been found and the gaps that still remain.

13 years later, not only has the jurisprudence that has to do with the framework of the law evolved, there is also a greater consensus that sexist violence is not only that which occurs in the sphere of the partner or ex-partner, as recognized the Istanbul Convention ratified by Spain. To advance on this path, the Ministry of Equality will start from this year to account for all the victims of femicide, and the statistics will no longer only address the murders of women in the context of a sentimental relationship, but will also be broken down according to various typologies: family, social, vicarious or sexual.

Beyond the judicial sphere, the case of Marta del Castillo raised an enormous social and media reaction, filling hours and hours of television and radio and the pages of the newspapers. "The coverage was done as is usually done with these cases, from a look at events. Expert voices or entities were hardly sought to explain what structural elements related to sexist violence could be there or reflect from this point of view. We have come a long way in this sense," believes Isabel Muntané, journalist and director of the Master's Degree in Gender and Communication at the Autonomous University of Barcelona.

Even so, the treatment of the disappearances or murders of women continues to be treated on many occasions from the spectacular nature, as the case of the 'king of the cachopo' demonstrated in 2018, and there are voices that suggest that some cultural or journalistic products based on the review of these cases still fall into some errors. This is stated by the journalist Andrea Momoitio in this article published in the magazine 'Píkara' about the documentary Where is Martha?of which he assures that "he loses the opportunity to make a critical analysis of one of the most mediatic sexist murders of recent decades".

However, the sociologist Esmeralda Ballesteros, professor at the Complutense University of Madrid, agrees that today would be different: "It was more than a decade ago, now the visibility that the feminist movement is having has produced a claim, a reaffirmation of the struggle for equality and for the need to incorporate this perspective". The expert considers it necessary to redefine past femicides from a feminist reading. In the case of Marta del Castillo, she reflects on two elements in this regard: "On the one hand, the power of silencing that the aggressor masculinity has. In her case, they have maintained that concealment until the end, which implies additional damage, also to their family and friends. It is a factor used by many gender aggressors. On the other hand, I would highlight the group strategy, closely related to masculinity".