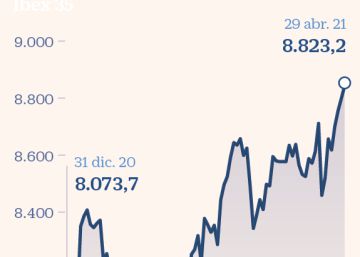 The Ibex rises more than 9% in the first four months of the year, a very good result after the drop of 15% in 2020. Europe replicates a similar behavior, with a rise in the Euro Stoxx of 12.5% ​​–after falling a 5% last year–, while on the other side of the Atlantic highs continue to be exceeded and the S&P 500 accumulates a revaluation of 11%. A rally at the beginning of the year that makes investors fear that the saying will be fulfilled sell in May and go away.

The data for the penultimate day of the month could increase these fears. The Ibex reached new highs yesterday, exceeding 8,800 points for the first time since February 2020 by adding 0.27%, while the rest of the European stock markets and Wall Street recorded slight losses despite the good macroeconomic data and the results of technology such as Apple or Facebook, which exceeded forecasts.

The historical data would justify the fear of this collapse. In 2019, the Ibex lost 6% in May after rising 8% until April. It also fell by 5% in the fifth month of 2018, although it already had annual losses of 2%. “The old saying is not a law, although turbulence is to be expected,” says Hans-Jörg Naumer, global director of capital markets & thematic research at Allianz Global Investors. The strong mood among investors, the stock market overbought environment or the decrease in volatility are some signs, he explains.

Likewise, analysts point to optimistic macroeconomic forecasts and possible changes in the discourse of central banks as potential triggers. “It is going to be a year of strong economic recovery and good corporate profits, but we have the feeling that current prices already meet these expectations,” explains Ángel Olea, partner and investment director of Abante.

This recovery could go hand in hand with a change in strategy by the European Central Bank or the US Federal Reserve According to Olea, after a few months in May and June that will also be good in Europe due to the advance in vaccination, and after a first and second quarter of positive growth in

In the US, at the June meetings, “central banks will prepare the market for the reductions in the asset purchase program that will already take place in December.” “The danger may come because the market is a little more complacent that monetary stimuli are going to be strong for a longer time and, in view of a good second quarter, those messages begin to change,” he explains.

In fact, Patricia García, an analyst at Macroyield, does not rule out that “this year will be sell in June, with the results campaign already amortized and with the possibility that the central banks begin to show more restrictive cards “.

In any case, Naumer recalls that the saying continues: “remember to come back in September” (but remember to come back in September). And it is usual that the best period of the year for equities takes place between October and April, so that, although the markets lose strength in the coming months, they could recover it around the summer, among other reasons, because the outlook for the year is positive, emphasizes Olea. In addition, he points out that, with rates so low, “there is no alternative to equities.”

Debt. The commitment shown by central banks to keep their monetary policies unchanged does not quite convince the market. The recovery of the US economy together with some inflation data published yesterday reactivated the alerts. Buoyed by an improvement in inflation expectations, investors took the opportunity to undo positions in fixed income, a move that pushed debt yields higher. The profitability of the Spanish bond closed at 0.475%, the highest in February, although at intraday levels it reached levels not seen since June. More pronounced was the rise in yields on German 10-year debt, which, although still registering negative rates, pierces the -0.2% barrier and stands at -0.19%, levels not seen since March of 2020 when the outbreak of the crisis and the initial inaction of the ECB caused the disbandment of investors.