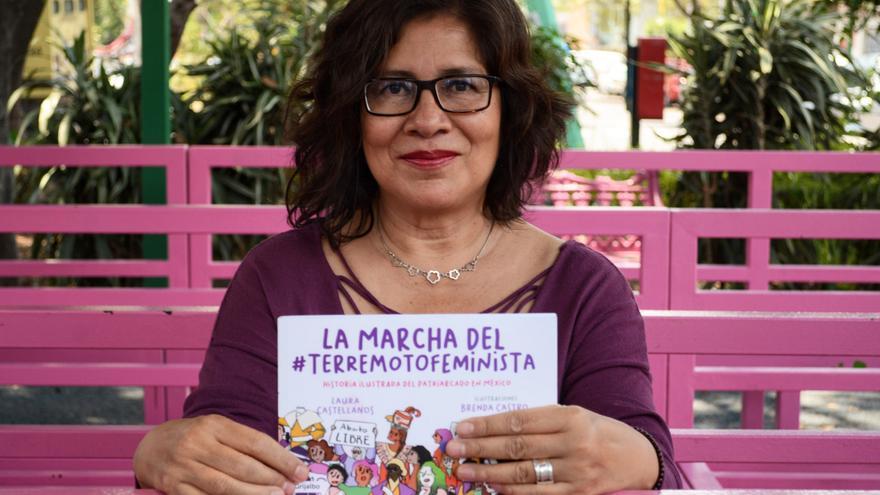 Mexico City, May 23 (EFE) .- “The march of the #Feminist Earthquake” relates how Sofi, a Mexican teenager, joins a march in which she will meet historical insurgents. “It was a loving way of rediscovering the ‘ancestors’ with the morritas (girls) of the 21st century,” Laura Castellanos, author of the book together with illustrator Brenda Castro, told EFE this Sunday.

“It is the history of gender violence, of how the patriarchal system has been built in Mexico. The most contemporary books come from Spain, Germany, the United States, but our gaze was missing, which has to do with a country that was conquered, with a humanitarian crisis due to femicides and disappearances, “Castellanos said.

The book, written and illustrated especially for young women but also for people of all ages, recounts through this adolescent the history of Mexico, where more than 10 women are killed every day, according to NGO data, and there are more than 88,000 missing people.

The country also added 977 femicides, murders based on gender, in 2020.

“There are different levels of reading. This book will say something to generations of educated feminists or from the 70s, but also to millennial generations and girls to whom moms will be able to read the book. But we are also interested in opening it, for example, trans people or men “, related the author of the text.

THE MISOGINE IS NOT “NATURAL”

From the mixture of journalism and fiction with clear and direct illustrations, both Castro and Castellanos shared the objective that women understand “where this historical oppression comes from, which is not something natural, it is something cultural that can be transformed,” said the journalist .

The idea for this book came to Laura in February 2019, after she had perceived a fourth feminist wave since 2018. He then proposed the idea to his editor and found Brenda on Twitter, who caught his eye for introducing herself as a feminist and vegan illustrator.

For the graphic artist it was “a surprise”, but from the first meeting everything “went natural” and in the course of making the book they identified what they wanted to convey with text and images.

For Castro, the process was especially enriching, since he discovered through his partner’s research “many things that he did not know”, and as he was making the illustrations he took special care “to know what Laura wanted to say so as not to give it in a biased way “, he recounted.

Another challenge for the illustrator was to get the historical characters to interact with Sofi, but doubts were dissipated by establishing that the march would be the place where she would meet and meet all of them.

Castellanos, who has an extensive career as a journalist, insisted that the main thing they seek to convey with “The march of the #EarthquakeFeminist” is “sisterhood and hope”, in addition to raising awareness as many people as possible.

“What the book seeks is this awareness, but there is a change in the collective consciousness of women. Girls already bring that chip of warriors beyond the ideological,” said the author, who added that Sofi exists and is a A girl who, despite being born in a conservative place, already assumed herself a feminist at the age of 13.

The book is a journalistic chronicle in which Castellanos, author of the books “Mexico armed” and “Chronicle of an embozado country” and Castro bring together all their qualities to create a material as raw as it is attractive.