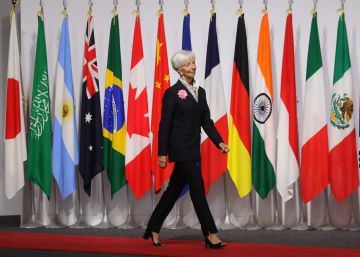 The Deputy Director of the International Monetary Fund, David Lipton, will assume the reins of the organization based in Washington after the nomination of the French Christine Lagarde as future president of the European Central Bank. Lagarde, whose term as managing director ended in 2021, announced on Tuesday that she was giving up her responsibilities as long as the confirmation process for the ECB was developed, but she has not formally resigned from the IMF, which can not be implemented. still the process of selecting your substitute.

The Executive Committee of the Fund, made up of 24 countries or groups of member countries, is responsible for opening the deadline and screening the nominations submitted to obtain a shortlist of finalists, who are interviewed in person at the headquarters until the decision is made. The weight of their votes is weighted according to their weight in the institution, with the USA at the top and 16.5% of the vote percentage.

Even so, since it was founded, the IMF has had 11 managing directors, all of them European, starting with the Belgian (Camille Gutt, 1946-1951) and ending with the French Lagarde. An unwritten law states that while the United States controls the world Bank, the rudder of the Fund corresponds to the other side of the Atlantic. But the question of whether this rule should continue to govern the future of the body was opened years ago with the push of emerging economies, which ask for more prominence.

In the abrupt handover of Dominique Strauss-Kahn, arrested for raping a woman, in 2011, Agustín Carstens was presented, then governor of the Central Bank of Mexico and now general director of the International Bank of Payments (BIS, in its acronym in English). The American Israeli Stanley Fischer, former vice president of the Federal Reserve, was ruled out by his age then, 67 years. According to the regulations of the Fund, the managing directors of the Fund must be under 65 years of age when they are appointed and can not fulfill their 70th birthday in office.

Lagarde took the cat to the water in the middle of that turbulent spring: she had a good reputation as finance minister, France kept "the square" and the institution put a woman in charge after the Strauss-Khan scandal, a way to try to counteract the disaster also at the hand of the image. As of that year, the Fund imposed more stringent ethical standards in the contract of the managing directors, not only that it demands "the highest standards" in ethics, but that they are urged to avoid "any appearance of inappropriate behavior".

The requirement seems to be addressed exclusively to the period in office, since the managing director did not have any problem in leaving confirmed for a new mandate in 2016 despite her involvement in the Tapie case when she was the finance officer. A judge imputed it for having arbitrarily paid an economic compensation of 404 million euros – at the expense of the public treasury – to Bernard Tapie, a business friend of the president, Nicolas Sarkozy. The court ruling came when Lagarde had already been renewed for another five years: the court blamed negligence, although there was no criminal conviction. A letter of yours to Sarkozy, revealed by Le Monde in 2013also left him in a very bad place: "I am by your side to serve you. Use me, "he wrote to his boss.

Now, among the names that have sounded in the past as possible managing directors is that of Carstens, the governor of the Bank of England, Mark Carney, whose term ends in January, and the academic Raghuram Rajan, governor of the Central Bank of India between 2013 and 2016, among others.