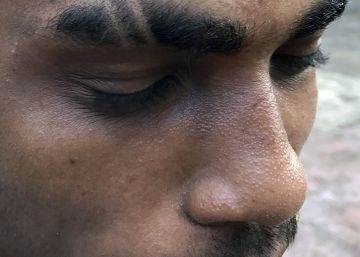 If something fascinates you Juan Valbuena (Madrid, 1973) are the stories. Hence, I have always needed to narrate. To carry it out you have to go slowly, stop, reflect. Exploring the territory and delving into the cracks in order to bring people closer to places they cannot visit and experiences that are not theirs. The journey has led him to adopt different facets and incorporate different elements into his work, continually challenging the traditional practice of documentary photography. A journey of 21 years that investigates the concept of travel, the territory and the border, as well as individual and collective memory through five projects brought together in an exhibition under the title Where the maps fold. Framed within the programming of the official section of PHotoESPAÑA, the sample will be able to be seen from September 15 in the Sala Canal II in Madrid.

“Valbuena’s photography is not seen at a first glance,” explains Sandra Maunac, curator of the exhibition. “Her relationship with the image implies a requirement for which the viewer is no longer a simple observer. Her images do not approach us as something purely spectacular, like a dream or something of extreme beauty. There is a detail that she places in each of those images that requires us to get closer. It is about a need to turn the viewer into an interpreter of what he sees, a participant in what he observes. Photography is not a simple solitary task for this author ”.

“The biggest challenge has been to transfer some stories or stories, initially conceived as books, to the wall,” confesses the curator. Thus, the exhibition has been proposed “as a compilation index of stories through which the viewer enters the different stories”. The tour starts with Dalind (2013-), the last and unfinished project of the photographer carried out in the Campo de Gibraltar, where he manages to introduce us to an iconography completely different from what is usually found in that region marked by marginalization, drugs and immigration. “Dalind It is the fictitious name of a real territory, a strange place, dotted with clichés and prejudices about its people. A very border territory ”, explains the author, founder of the publishing house PHREE and member of the collective NOPHOTO. “A place where apparently nothing happens, but many things happen. Many of which cannot be photographed. For its development I am carrying out a strategy that for the first time is a bit closer to fiction. My photography has become Americanized and all these influences are perceived in this project. It is inspired by the America of the border. I work with large cameras, so it is not possible to go unnoticed within this ‘hostile’ territory. You can’t steal a photo. It forces me to talk to people ”. To unravel the mystery through a series of portraits and landscapes that replicate each other. Faces where the imprint of a powerful geography is perceived and scenarios where the lives of its inhabitants seem to resonate. “I’m looking for what Steiner referred to as the fertile echo of images,” adds the photographer.

In addition to his eagerness to understand things on the spot, encouraged by his curiosity, his irrepressible desire to narrate is added. Hence, photography sometimes falls short for the photographer, aware of the limitations and polysemic nature of the medium. “I never think about photos anymore. I think of books. I think about projects. I think of a book that tells something I want to tell ”, the author confesses to journalist Alfonso Armada, in a conversation that is included in the catalog that accompanies the exhibition. “What is happening to me is that the word is acquiring more and more force. Project after project I feel more and more necessary the word and more insufficient photography ”.

Thus, the word appears in diary form in Noray (1999-2012); a journey in black and white that begins in Cádiz and will take the author to Athens. Where the similarities between cities stand out more than their differences. “At that time I had a slightly different idea of ​​photography than the one I have now: more French, less complex, more precious. He relied more on photography. Thus, this project is a reflection of the photographer that I wanted to be, influenced by literature and poetry. Someone who traveled the world with his camera transmitting the emotions of the trip ”, highlights the photographer.

The series is exhibited on the first floor, in dialogue with A place in La Mancha (2006-2020), a reconstruction of the visual memory of the author’s family. A personal story that becomes a shared story, and investigates the relationship with the territory from which we originate. To do this, the photographer makes use of vernacular photography, aware of the burden of emotion and truthfulness that it treasures as an antidote to the overabundance and emptiness of many of the images that flood us. It is perhaps in the photo split in half, in which his grandfather Darío was portrayed along with other children, kept in a family cane album, where the seed of the attraction that the author manifests for what is concealed is found. “That invisibility is what will guide most of his projects. All his series are an attempt to reveal what is hidden or difficult to photograph, ”says the curator.

Saltpeter (2009-2014) occupies the second floor of the room. “It represents a before and after in his understanding of photography and the role and responsibility of the creator of an image in our society”, Maunac emphasizes. The author delves into the experience of twelve Senegalese living in a 50-square-meter patera apartment, in the Lavapiés neighborhood of Madrid. “I realized that the least important thing in the project were the images that I could make: portraits and shots inside the house. Hence, I decided to give a voice to the inhabitants of the place and give each one a notebook where they can write down their experiences ”, says the photographer. Thus the notebooks were filled with drawings, annotations, photographs and other documents that now make up a harsh first-hand account that shows the disappointment and broken dreams of those who risked and left a lot behind in order to start a new life.

In 2008 Valbuena became involved in a complex and ambitious project that took him into the intricate historical relationship between Spain and Equatorial Guinea, the result of which was Out of sight, out of mind (2008-2018). A work determined by the scarcity of archive images and the impossibility of making new ones, articulated around the publication of a newspaper with the aim of turning the historical chronicle of two centuries into a political news. These newspapers produced by the author are presented on the third floor along with five television screens, where, as current news, that long period of shared history that intersects with the history of photography is summarized. “I think it is a very transgressive project in its desire to build a counter information on an episode that has been completely shelved. And where the emphasis is placed on the human being. The story is not made only of facts and figures but it involves all those characters affected by the different events. It is these who become the true protagonists of this project ”, highlights the curator.

The top floor of the building has been filled with light in order to achieve a library atmosphere, where circular tables gather all kinds of curiosities that have served as the seed in the development of the work. “It has symbolically become the author’s brain”, Maunac clarifies. “We delve into his head, his laboratory and his way of working, in his obsessions to bring to light silenced or hidden stories. In his need to add to build a story ”. “Juan Valbuena does not define himself as an author”, writes François Cheval in the catalog. “He is simply a man stripped of the false and the immediate. While the photographic practice seems to be born of the new, he stands up, ready to reject, without remorse, but with an implacable will, the previous vestiges ”.