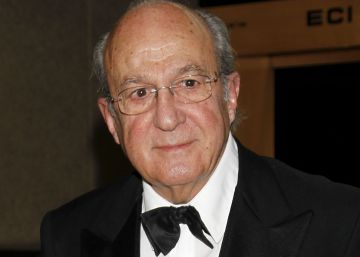 One night in 1991, Mahrukh Tarapor, deputy director of the Metropolitan Museum in New York, sought help to overcome the obstacles that the Spanish bureaucracy put to the exhibition on the discoveries he organized at the Alhambra in Granada. There was no one, neither in the Government, nor in Telefónica, nor in the BBV, the entities that had to take care that she carried out that immense project. It appeared then, like a miracle, Placid Arango, the man who answered all calls, especially distress calls.

The telephone rang in the corridors of their offices, until this Spaniard from Mexico and Asturias passed by, picked up and found one of the most powerful agents in the artistic world of the time tearful. Tarapor felt helpless in Spain. In an instant, this man put her on the road to solving a mess that could have truncated one of the most important contributions to that attempt to make the celebrations of the fifth centenary of Columbus’s journey eternal.

Tarapor thought that the influence of this man was that of a magician. As it happened so many times, Arango took off the merit. “I was passing by, I always grab the phone when it rings.” It always happened that way, he did great things, in favor of his country of origin, Mexico, and the country of his root, Spain, as if he were just passing by. He was a facilitator, he brought people together and let them do, until they agreed, and he did that in the cultural field, in business and in the political side of the life he dealt with.

He was solemn only because he walked slowly, but to everything he did, big and often, he gave the dimension of a man who wanted the institutions to which he dedicated energy and resources to shine (the Prince of Asturias Foundation, which he chaired , the Board of Trustees of Prado Museum, which was at your service). He could not prevent his name from appearing, but if it had been for him he would have worked on all those things as if his mark were that of a pseudonym. As if passing by.

Also in much more serious moments, which have to do with the difficult democratic history of this country, when required from the highest levels, or from the threatened areas of the wide cast of his friends, he resolved conflicts with stealth, without giving importance to Your level of personal influence. He always moved close to where he was needed, and appeared, as that time with Mahrukh Tarapor, as if he was solving a distress call.

That availability was helped by his character. He was a leisurely man. The rush was carried inside, to manage, to make others rigorously manage their own hurry, and thus carried out orders that were to be prolonged commitments. In front of the Prince of Asturias Foundation He was, like those times when he answered the calls, the man who was always available, to help make the muddles of that venture that had both a diplomat and the creation of a cultural spirit that led the world the idea that the Spain of the Transition had already acquired a culturally reliable seniority. His other main occupation, the presidency of the Board of Trustees of the Prado Museum, which he accessed in 2007, found not only a collector who loves classical and contemporary art, but also a quiet manager who, with the prudence that was also his currency as an entrepreneur, he affirmed this art gallery as a world treasure that the Spaniards should be proud of.

The hometown of his family, Asturias, benefited greatly from the generosity with which he had his private collection (El Greco, Zurbarán, Ribera, Murillo, Miró, Gris, Dalí, Tàpies, Barceló), who in 2006 traveled to the Regional Museum of Fine Arts as a explanation of your taste and your passions. A Ángeles García was told in EL PAÍS (July 27, 2007, when he was elected president of the Prado) that his first painting had been of a Mexican creator (who no longer had himself). The Mexico of arts and literature (Carlos Fuentes, one of his great friends, was his guest in Madrid) was part of his Mexican heart. Arango was born in Tampico, Mexico, in 1931, and from there the root that completed his Asturian biography was brought to Spain, to which he always paid tribute.

He gave his good friends the lyrics of the rancheras as if he were giving them the other rhythm of his heart. The sculptor Cristina Iglesias was for years her partner. It’s weird to say that Placido is dead. His passage through this life was as a tribute to calm and relief, and the news of his death now feels like a storm.