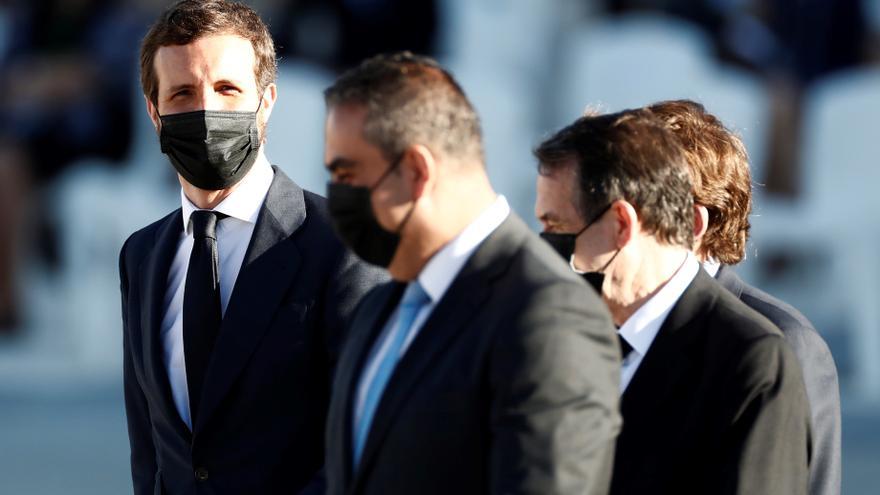 The president of the Popular Party, Pablo Casado, has blamed the press on Friday for the calls for restraint made this week by the barons of his party after the result of the 12J elections: “The mainstream the media only appreciates that we say yes to everything. “With these words Casado expressed himself during the presentation of the book The European Central Bank. Reform Proposals, written by the PP senator, Fernando Martínez-Maíllo, a leader very close to the moderate wing of the party inherited from the time of Mariano Rajoy. The former president was also in the room, as well as the vice president of the European Central Bank (ECB) and former economy minister, Luis de Guindos.

Married has defended his strategy against the internal voices that since the result of the 12J elections – in which the Galician Alberto Núñez Feijóo devastated, but the personal commitment of the PP leader, the PP + Cs candidacy in Euskadi – failed they ask for a twist to moderation. “The problem is not one of form, it is content, it is not the opposition’s but the government’s.”

Once again, the PP leader has alluded to the interview that the Prime Minister, Pedro Sánchez, gave to the Italian newspaper Il Corriere della Sera, in which he assured that he was never in favor of signing a large coalition with the popular ones.

For Casado, “Sánchez said that he had never considered reaching any kind of agreement with the PP to avoid being the Greek Pasok. This is the real face of Pedro Sánchez, he has denounced. In his opinion,” the problem is not PP, the problem is with the Government that does not want to agree with the PP because it thinks that by agreeing with the PP they would disappear. “Despite these calls to agree with the PSOE, just a few seconds later, Casado added:” You cannot ask the opposition finance irresponsibility. ”

Asked about the investigation of Juan Carlos I about his accounts in Switzerland, Casado has assured “trust” in “the presumption of innocence” of Juan Carlos I and has criticized that the Government “is asking for a referendum and the abdication of the king” . “The PP supports Felipe VI and the Royal House as guarantor of the historical continuity of Spain and guarantor of the nation,” he said. “What I find disturbing and disturbing,” he added, paraphrasing Sánchez himself, “is a government that is saying what it is saying and that is agreeing with whoever is agreeing.”