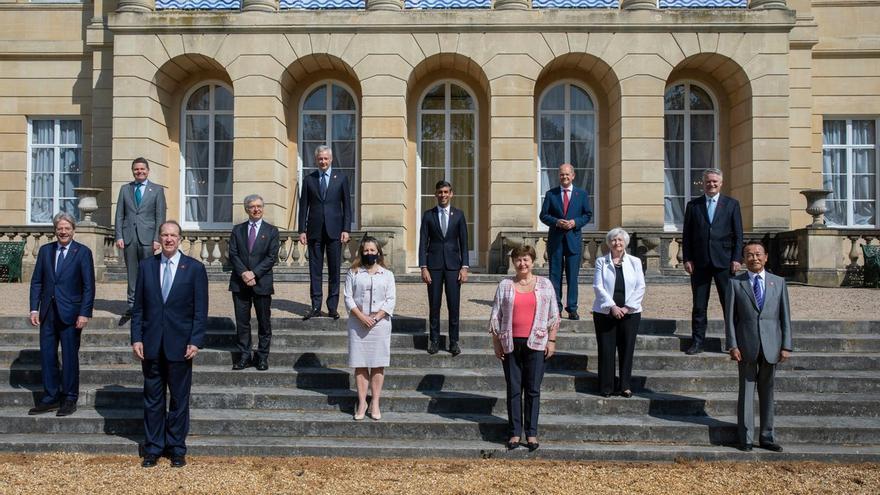 There is agreement. For the first time, it has been agreed that there is a global minimum tax of 15% to prevent large companies from circumventing the payment of taxes and, at the same time, that some countries such as the Netherlands, Ireland and Luxembourg do dumping tax to its partners. The G7 Finance Ministers, meeting in London, they have managed to close the agreement and they have finished it off for the summit next weekend in Cornwall (United Kingdom), where the leaders of the main world economies (United States, Canada, Japan, United Kingdom, Germany, France, Italy, and the EU as invited) will be able to ratify an unprecedented agreement.

The Chancellor of the Exchequer, the British Finance Minister and host of the meeting, Rishi Sunak, said: "We have reached a historic agreement on global tax reform that will require multinational tech giants to pay their fair share of taxes in the Kingdom. United. The largest global firms, with profit margins of at least 10%, will be within the scope of the measure, with the 20% profit above the 10% margin subject to tax in the countries where they have sales. " .

According to Sunak, "The G7 has also agreed that at least 15% of the global minimum corporate tax operated on a country-by-country basis, creating a more balanced playing field for UK companies and cracking down on tax avoidance. The deal it will now be discussed in more detail at the G20 summit in June. "

"We did it!", Said French Finance Minister Bruno Le Maire: "After 4 years of struggle, a historic agreement has been reached with the G7 member states on minimum taxes on companies and digital giants. France can be proud! "

On the eve of the meeting, the Finance Ministers of Spain, Italy, France and Germany published an article in The Guardian this Friday in which they pushed to reach an agreement on a universal corporate tax before the meeting of finance ministers of the G7 this Friday and Saturday in London.

"For more than four years, France, Germany, Italy and Spain have been working together to create an international tax system suitable for the 21st century," write the four ministers in The Guardian: "It is a story with many twists and turns. Now now is the time to reach an agreement. The introduction of this fairer and more efficient international tax system was already a priority before the current economic crisis, and will be even more necessary when we emerge from it.

And they add: "With the new US administration of Joe Biden there is no longer the threat of a veto on this new system. The new US proposal on minimum taxes is an important step in the direction of the idea initially raised by our countries and assumed by the OECD. The commitment to a minimum effective tax rate of at least 15% is a promising start. We therefore committed to defining a common position on a new international tax system at the G7 finance ministers meeting in London today [por este viernes]. We are confident that it will generate the necessary momentum to reach a global agreement at the G20 in Venice in July. It is within our reach. "

The US Treasury Secretary, Janet Yellen, who initially put a rate of 21% on the table, has defended the 15%, a meeting point with her European colleagues. And he has entered into the agreement.

The French Minister of Economy, Bruno Le Maire, for his part, had already advanced that the US proposal to agree on a global minimum tax for corporations of at least 15% "could be a good compromise", in a round of press with German Finance Minister Olaf Scholz, who called it "great progress." In any case, Le Maire has insisted that the "key" issue is to reach a global agreement on a minimum corporate tax and a tax on large digital companies during the G20 finance ministers meeting that will take place on 9 and 10 July in Venice (Italy).

In an interview with the US channel CNBC, the European Commissioner for Finance, Paolo Gentiloni, said: "What we hope in relation to universal taxation is to have a good discussion these days and move forward. Of course, the agreement must be global. , we have 139 countries involved. At the next G20 meeting it will be possible to reach an agreement. We are working at the OECD level to reallocate tax rights for giants, including digital ones, and I think we are on the right track. Of course, the discussions will continue on the details, on the models to implement this idea ... We clearly have winners from this pandemic and when we discuss the future of the world economy after the pandemic it is quite fair to have a proposal on taxes on these. giants ".

"In recent months this discussion has accelerated due to the proposals of the new US administration," Gentiloni acknowledged: "They are very committed and constructive and, in general, I believe that the US contribution to the global recovery, with its own Stimulus packages will be crucial. I'm pretty sure this stimulus to the US economy will have positive effects on the European economy and elsewhere. "

Thus, the fence is tightened on companies that avoid paying taxes and the countries that benefit from it, with the cost of their neighbors raising less money that can be invested in sectors as necessary as public health in times of pandemic. Countries are losing more than € 358 billion in uncollected taxes each year due to abuse of corporate tax breaks and private tax evasion. According to the organization Tax justice, what countries stop entering is the equivalent of almost 34 million annual nurses' salaries, or the annual salary of a nurse every second.

Alex Cobham of Tax Justice has reacted to the deal with reservations: "The G7 has reached an agreement on an international tax. It is a great deal, but it is not enough: they have finally decided to move the international tax system into the 21st century, but only enough to blatantly benefit themselves, leaving the rest of the world behind. "